Poverty Point (French: Pointe de Pauvreté) is a prehistoric mound builder site located in the extreme northeastern corner of the present-day state of Louisiana, 15.5 miles (24.9 km) from the Mississippi River. It is a complex array of earthen mounds and ridges overlooking the Mississippi's flood plain. The site is named after the plantation on which it was discovered in the mid-1800s, when it was believed to be a natural formation. It was not discovered to be man-made until the 1950s, when aerial photographs revealed the complex and sophisticated pattern of the earthwork.

Built between fourteen and eighteen centuries B.C.E., Poverty Point was the commercial and governmental center of its day. Archaeological studies lead to the conclusion that the community who built Poverty Point may have been among the first of the hunter-gatherer groups to settle in permanent villages. The studies indicate the inhabitants formed an complex society with an economic, political, and social structure. It is considered one of the most important archaeological sites in North America, and part of the foundation of early North American society.

It was not until the discovery of Poverty Point that proof was provided of the capability of ancient American societies to create works that could rival those of the great Eastern civilizations of the same era.

Jacob Walters was an explorer looking for lead ore in the 1840s, who reported finding Native American artifacts in the far northeastern corner of Louisiana, on a plantation known as Poverty Point. However, the earthworks at the site were too large to be recognizable from the ground. The first archaeologist to report on the site was Samuel Lockett in 1873, which prompted visits by many archaeologists afterward.

However, the significance and magnitude of Walters' find was not realized until the 1950s when an aerial photograph revealed the size and unique layout of the land. [1] Routine inspection of the photograph led to excavation by James Ford and Stuart Neitzel of the American Museum of Natural History. Their work confirmed that Poverty Point was an earthen enclosure, built on such a large scale that it defied recognition from ground level.

Poverty Point was the first site to offer scientific evidence of a highly developed, ancient American culture. When archaeologists recorded the prehistoric site they used the name given the area by the nineteenth-century owners of a historic plantation on which the artifacts were discovered. This became the site's official name. 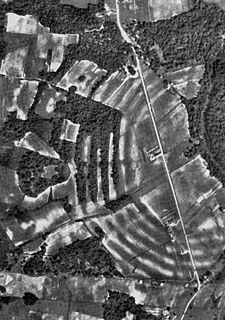 The Poverty Point archaeological site covers an area of roughly 400 acres (1.6 km²). In the center of the site, there is a set of six curved earthen ridges with flat corridors of earth separating them. Dividing the ridges into three sections are two ramps that slope inwardly leading to Bayou Macon. Each ridge is approximately a meter (3.28 feet) high, although it is believed that they once rose to 1.53 meters (five feet). The approximate diameter of the outside ridge is three-quarters of a mile, while the innermost ridge’s diameter is about three-eights of a mile. [2] The five aisles and six sections of ridges form a partial octagon.

In the area surrounding the arches, there are five mounds. One is described as bird-shaped, another conical-shaped, and the remaining three are platform mounds. There is another known mound, located north of the main concentration of mounds, called the Motley Mound. The final mound is located south of center and called Lower Jackson Mound, bringing the number of discovered mounds to seven.

The bird mound is the largest of the mounds at 69 ft (21 m) high. There is a ramp leading to the top of the mound’s elongated middle, giving it the shape of a bird with spread wings; this mound is located at the top of the midsection of the arches. The Motley Mound is of a similar form and rises 51 ft (16 m). The conical mound is circular and reaches a height of 24.5 ft (7.5 m). The three platform mounds are much smaller than the other mounds. Lower Jackson mound is believed to be the oldest of all the earthworks at the site. [2]

Poverty Point is considered one of the most important archaeological sites in North America, built by an ancient but highly civilized group of people.

Radiocarbon dating puts the construction of the site between fourteen and eighteen centuries before the common era. To put this in perspective to world events of that time:

At the time, the Poverty Point site had the largest, most elaborate earthworks anywhere in the western hemisphere, while Native Americans throughout the North American continent were generally small bands of migratory hunter-gatherers. Questions arise then as to the type of society which could construct such huge earthworks. It is speculated that the community who built Poverty Point must have been among the first of the hunter-gatherer groups to settle in permanent villages and form a complex economic, political, and social structure. It was not until the nineteenth century that any other earthen constructions in the region approached the size of Poverty Point. 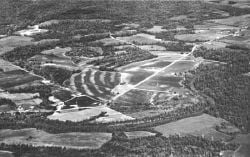 An aerial view of the Poverty Point earthworks.

Some in the archaeological community believe that the site at Poverty Point was mostly used as a ceremonial center where people congregated at various times of the year, rather than as a city.[2] Marriages, trade, kin ties, alliances or social or religious ceremonies are speculated as reasons for gathering. Other camps believe that the ridges served as foundations for dwellings, though little evidence of such structures has been found. There are, however, features and midden deposits uncovered during excavations that support the theory of use as homes.[3]

The Poverty Point site did not gain protection until 1972. Until that time the land was plowed and crops were planted. Such modern farming techniques would likely have either destroyed evidence of dwellings, or rendered them unrecognizable.[1] While there is not enough evidence remaining to define exact housing patterns, it is generally accepted that substantial dwellings existed. Combining their findings at Poverty Point with evidence from similar sites, archaeologists believe dwellings consisted of grass and mud on the terraced ridges.

Artifacts that have been recovered in archaeological excavations from Poverty Point typically are items imported from great distances. This includes projectile points and microliths that have been determined to have originated in the Ouachita and Ozark Mountains and in the Ohio and Tennessee River valleys. There is also evidence of soapstone from the Appalachians of Alabama and Georgia.[3] There are copper and galena artifacts that indicate trade with the prehistoric copper producing region of the Great Lakes and other materials from distant locations on the East Coast.[2]

Foreign artifacts in such large amounts could indicate that they were gifts used for ritual and social purposes by the gathering people. These gifts were left behind periodically, and over the several generations of people using the site, slowly accumulated into the hundreds of intricate artifacts discovered during archaeological excavations. Their presence indicates that the people at Poverty Point were in contact with a wide range of other groups and attests to the complex and sophisticated society that built the Poverty Point earthworks.

The Poverty Point archaeological site is important from an anthropological viewpoint as it offers insight into life of the region's Native inhabitants prior to European habitation.

"Poverty Point Society" describes community life and daily activity in and around the Poverty Point site that existed for several centuries, and distinguished it from other earlier and later pre-historic societies. The term "Poverty Point Culture" refers to an archaeological concept used to describe a wide area of general artifact similarities within the Lower Mississippi Valley.

Dozens of sites are located within a 25-mile radius of Poverty Point and appear to have resulted from the direct influence of Poverty Point, which was also important to distant communities scattered throughout the Lower Mississippi Valley.

Mound building societies on the continent existed for two or three thousand years before the earthworks at Poverty Point were constructed. The Poverty Point site was not the first of its kind, though it was larger and more sophisticated than any other site found. While it is known that Watson Brake, a mound builder site in northern Louisiana, pre-dates Poverty Point, that site was used as a base by mobile hunter-gatherers from summer through fall. In contrast to this semi-permanently occupied site, Poverty Point stands out. Watson Brake was the predecessor to Poverty Point, which had advanced to a complex social organization that took part in extensive trading networks, and seemingly maintained year-round occupation.[4]

Though there are many unanswered questions regarding the purpose of Poverty Point and the society that created it, archaeologists agree that it was a society transitioning from small blood-related groups to a larger more organized social system. The carefully laid-out features of Poverty Point followed a thought-out masterful design. The level of organization needed required strong leadership qualities. The site's construction was a massive project and huge undertaking. [3] 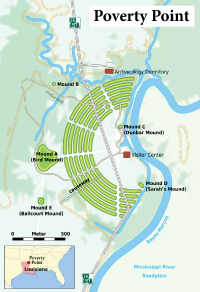 On June 13, 1962, the earthworks of Poverty Point along with five other earthen mounds (Mounds B-E and Motley Mound) were designated a National Historic Landmark. In making the designation, the National Parks Service noted, "Poverty Point is the largest and most complex Late Archaic earthwork occupation and ceremonial site yet found in North America."[5]

On October 31, 1988 Poverty Point National Monument was created by Congress, who expected the donation of the land for the National Park Service. The land, however, never exchanged ownership from the state of Louisiana to the national government; despite this fact, the site is counted among the 391 units of the National Park System.

In 2014, UNESCO named Poverty Point a World Heritage Site, a rare distinction for archaeological sites in the U.S.[6]

Retrieved from https://www.newworldencyclopedia.org/p/index.php?title=Poverty_Point&oldid=1090280
Categories:
Hidden category:
This page was last edited on 30 November 2022, at 22:08.
Content is available under Creative Commons Attribution/Share-Alike License; additional terms may apply. See Terms of Use for details.