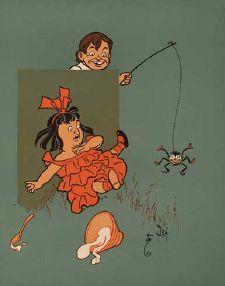 Fear of spiders is one of the most common phobias

The term phobia, from the Greek φόβος meaning "fear," is a strong, persistent, and irrational fear or anxiety of certain situations, objects, activities, or persons. A phobia disorder is defined by an excessive, unreasonable desire to avoid the feared subject. Phobias are generally believed to emerge following highly traumatic experiences. Many individuals suffering from certain phobias are believed to transfer the fear of an original situation to other situations experienced in or reoccurring throughout everyday life, while the original fear is often left forgotten. Such an example can be seen in near-drowning incidents; an individual may often develop an irrational fear of water, despite minimizing the original fear of drowning. Behavior therapy, or the gradual exposure of an individual to certain objects of their most irrational fears, is generally accepted as the best method for overcoming certain phobias. However, the origin and continued recurrence, generation after generation, has yet to be solved.

Phobias, or phobic disorders, are defined as an intense, irrational fear that often leads to the extreme avoidance of the object or situation feared. They are common and believed to originate in childhood or adolescent experiences, although some common phobias have been suggested as being inborn, such as fear of heights or snakes.

Social phobias are defined by a fear of being watched or judged by others, and can include a deep fear of public embarrassment. A social phobia may also encompass a general fear of social situations, and a subsequent experience of severe anxiety when in them. Individuals experiencing social phobias may worry excessively about upcoming social situations, and may avoid events in which they may feel self-conscious. In extreme cases, individuals experiencing such phobias may deny job offers or avoid relationships due to their fears.

Agoraphobia, often believed to be the fear of open spaces, is actually the fear of feeling trapped and having a panic attack within a public space. Agoraphobia is believed to develop between the ages of 15 and 35 and is most prevalent in women. Agoraphobia often develops from an initial panic attack; after such an attack, an individual may deeply fear having another. Patients suffering from agoraphobia may incessantly fear when the next attack may occur, often generalizing their fear with one of public spaces and social settings. In its most extreme form, a patient may be unable to leave their home.

Most individuals experiencing a phobic disorder experience an anxious phobic reaction when encountering the feared object or situation. Though the triggers of certain phobias are often different, individuals dealing with phobias often face similar symptoms. Such symptoms include a feeling of terror of impending doom, rapid heartbeat and breathing, and sweaty palms. Such reactions can also consist of extreme fearfulness, elevated blood pressure, physical shaking, hot or cold flashes, nausea, and irrational cognitive reasoning. Once the individual is removed from the feared situation, these effects quickly subside; this degree of relief is believed by psychologists to reinforce the phobia and to further strengthen the avoidance of the individual to the feared object or situation. In more extreme cases, a "phobic trigger" may occur; someone struggling with a fear of water may experience episodes of panic attacks weeks before a planned vacation to the beach.

Research on phobic disorders has suggested the development of certain phobias to be both hereditary and situational. While specific phobias are often believed to be hereditary, many psychologists also identify a link with certain phobias and negative past experiences. For example, prolonged flight turbulence may trigger a subsequent fear of flying.

Most social phobias are believed to originate in a childhood or adolescent experience. Certain individuals who have experienced repeated rejection, especially during formative years, may subsequently develop poor social skills, low levels of self esteem, and an ensuing social phobia.

More is known about conditions of agoraphobia. Because panic attacks may develop spontaneously, an individual may often develop a gripping fear of when his or her next attack may be. This can lead to the avoidance of places where an individual may feel he or she could not escape if a panic attack did occur.

Phobias may be treated by various forms of therapy, ranging from techniques based on behavior therapy, such as systematic desensitization, to more cognitive therapies, such as exposure therapy.

Systematic desensitization is a type of behavioral therapy used to help effectively overcome phobias and other anxiety disorders. More specifically, it is a type of Pavlovian therapy developed by South African psychiatrist, Joseph Wolpe. To begin the process of systematic desensitization, one must first be taught relaxation skills in order to control fear and anxiety responses to specific phobias. Once the individual has been taught these skills, he or she must use them to react towards and overcome situations in an established hierarchy of fears. The goal of this process is that an individual will learn to cope and overcome the fear in each step of the hierarchy, which will lead to overcoming the last step of the fear in the hierarchy. Systematic desensitization is sometimes called "graduated exposure therapy."

Many phobias are treated through exposure therapy, or the gradual exposure of the feared object to the individual in successively longer time periods. Exposure therapy is believed to be the best approach for certain phobias as the individual is placed in an environment of comfort at all times when exposed to the object. Exposure therapy is a cognitive behavioral therapy technique for reducing fear and anxiety responses, especially phobia, and is based on the principles of habituation and cognitive dissonance. It is similar to Systematic desensitization, though it works more quickly and produces more robust results. It is also very closely related to Exposure and response prevention, a method widely used for the treatment of Obsessive-compulsive disorder. Three fourths of patients show significant improvement from this treatment.

Cognitive therapy is also used in the treatment of phobic disorders and involves an analysis of one’s thoughts and beliefs in phobic situations. By helping individuals recognize the relationship between one’s thoughts and one’s anxiety, and that the majority of feared outcomes are unlikely, psychologists help phobic individuals to gain more control over their feared situation.

Some medications can be prescribed in the treatment of phobias. Beta-adrenergic blocking agents help to lower heart rate and reduce physical tremors, and help to reduce general anxiety within phobic patients. Antidepressants are also believed to affect certain regions of the brain in which fear is mediated, further helping to reduce anxiety in panic-prone patients. Other prescriptions involve life-changes such as the elimination of caffeine, alcohol, and stress, and maintaining a healthy diet and exercise.

Most phobias are highly treatable and individuals can often go on leading normal lives. Research has shown that once a person is rid of a phobia, it is less likely, if ever likely, to return. In matters where certain phobias are left untreated, an individual may be inflicted for life. In some cases, untreated phobias can lead to other problems and disorders, including depression, low self-esteem, and social avoidance. Psychologists suggest most adult phobias to be treated; however only 25 percent of people experiencing phobias are believed to seek help.

There exist more than 600 recognized phobias, many without treatment. Several common examples are detailed below.

Acrophobia, a specific phobia from the Greek word ἄκρος, meaning "summit" is an extreme or irrational fear of heights. Acrophobia can prove dangerous, as sufferers may often experience a panic attack in a high place and become unable to get themselves down safely. Some acrophobics also suffer from urges to throw themselves off high places, despite not being suicidal.

The most widely accepted explanation is that acrophobia stems from the fear of falling and being injured or killed. This is classified as a normal and rational fear that most people have.

Arachnophobia is an intense and unreasonable fear of spiders and other arachnids such as scorpions. People with arachnophobia tend to feel uneasy in any area they believe could harbor spiders or that has visible signs of their presence, such as webs. If arachnophobes see a spider, they may not enter the general vicinity until they have overcome the panic attack that is often associated with their phobia. Some people run away, scream, cry, have emotional outbursts, experience trouble breathing, sweat, have increased heart rates, or even faint when they come in contact with an area near spiders or their webs. In some extreme cases, even a picture or a realistic drawing of a spider can trigger intense fear. Treatment is typically by exposure therapy, where the person is presented with pictures of spiders or the spiders themselves.

Aviophobia is a strong fear of flying, or a fear of air travel. It is also sometimes referred to as "aviatophobia" or "aviophobia." Though commercial flight has become an prevalent part of modern life, flying continues to cause a significant proportion of the public to feel anxious.

Some people who are afraid of flying manage their fears well enough that they are able to fly, but may still spend considerable time and emotional energy thinking about the dangers that may befall them during flight. In extreme cases individuals are nearly incapable of getting on an airplane, and must use other means of transportation to achieve long distance travel.

Like many phobias, fear of flying may "generalize" to cause fear of flight-related situations or stimuli. Many individuals with a strong fear of flying report anxious symptoms or panic attacks when discussing air travel, when seeing airplanes overhead, when visiting airports, or when watching television programs or films that depict air travel.

Claustrophobia is an anxiety disorder that involves the fear of enclosed or confined spaces. Those suffering from claustrophobia may suffer from panic attacks, or fear of having a panic attack, in situations such as being in elevators, trains, or aircraft.

Conversely, people who are prone to having panic attacks will often develop claustrophobia. If a panic attack occurs while they are in a confined space, then the claustrophobe fears not being able to escape the situation. Those suffering from claustrophobia might find it difficult to breathe in closed auditoriums, theaters, and elevators. Claustrophobia can be treated in similar ways to other anxiety disorders, with a range of treatments including cognitive behavior therapy and the use of anti-anxiety medication.

Xenophobia denotes a phobic attitude towards strangers or of the unknown. It comes from the Greek words ξένος (xenos), meaning "foreigner," "stranger," and φόβος (phobos), meaning "fear." The term is typically used to describe fear or dislike of foreigners.

Xenophobia implies a belief, accurate or not, that the target is in some way foreign. Prejudice against women cannot be considered xenophobic in this sense, except in the limited case of all-male clubs or institutions. The term xenophilia is used for the opposite behavior, attraction to or love for foreign persons.