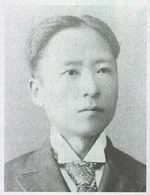 Philip Jaisohn (b. January 7, 1864 in Boseong County, Korea - d. January 5, 1951 in Norristown, Pennsylvania), the anglicized name forSeo Jae Pil, a noted champion for Korea's independence and the first Korean to become a naturalized citizen of the United States.

Philip Jaisohn devoted his life to Korean independence and sovereignty. As a talented young man, he passed the Geoweon civil service examination, becoming a yangban. He traveled to Japan, studied the progressive developments during the Meiji Restoration, and became a committed Progressive. Taking part in a failed coup in 1884, Jaisohn took refuge in the United States where he became a medical doctor and the first Korean to gain American citizenship. He returned to Korea twice more in service of Korea, in 1895-1898 as chief advisor to the Korean government and in the aftermath of the Korean War, 1945-1948 as the chief advisor to the American government.

Seo Jae-Pil (Jaisohn's original name), born as the second son of a local magistrate, grew up in Seoul, raised by one of his relatives. When a teenager, he already imbued modern political ideas in association with reformist leader Kim Ok-Kyun. He passed the civil service exam and became a junior officer in 1882. In the following year, the Korean government sent him to Japan where he studied both at the Keio Gijuku (the forerunner of the Keio University) and the Toyama Army Academy.

In 1884, Seo Jai-Pil, following Kim Ok-Kyun, participated in the Kapsin Coup, a radical attempt to overturn the old regime and establish equality among people. He received the appointment of the Vice-minister of Defense immediately following the coup. China intervened with military troops, ending the coup after three days. Charged with treason, Seo Jai-Pil lost his family and property, fleeing Korea with the other conspirators aboard a Japanese ship from Inchon.

Exile in the United States

In the United States, Seo Jai-Pil attended the Harry Hillman Academy (Wilkes-Barre, PA) thanks to the help of John Wells Hollenbeck. He began using the name "Philip Jaisohn" at that time. In 1890, he became the first Korean-American acquiring citizenship of the United States. He studied medicine at the Columbian College (now George Washington University), receiving a medical degree in 1892. In 1894, he married Muriel Armstrong, a niece of the former president of the United States, James Buchanan and had two daughters; Stephanie and Muriel.

In 1894, Japan defeated China in the Sino-Japanese War. With the victory over China, Japan gained powerful influnce in Korea. The Japanese promoted pro-Japanese Progressives into cabinent positions. Along with those political changes, Japan pressured the Korean government to drop treason charges against the leaders of the Kapsin Coup, enabling Jaisohn to return to Korea in 1895. 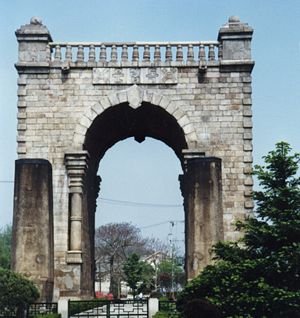 In Korea, Jaisohn endeavored to use the power of his position to educate the Korean people. He edited and published the The Independence (독립신문) newspaper with the intention of transforming the Korean people into an informed citizenry. Breaking with the tradition of publishing in Chinese, Jaisohn used hangul in his publication, the first time since Sejong created hangul that a Korean published using the native Korean script. American, British, Canadian, and Australian missionaries had translated the Bible into hangul. In one stroke, Jaisohn bypassed the entrenched conservative yangban (who read and published using Chinese characters), extending readership to lower classes and women.

In the pages of the ''Independent'', Jaisohn promoted Korean independence in the face of growing pressure and intrigue by Japan and Russia. He welcomed the independence of Korea from China, yet made clear his expectations of Korean sovereignity from Japan and Russia. The Japanese government stepped up attempts to seize control of the Korean throne during Jaisohn's publication of the Independent including assassinating Queen Min in 1895 and placing King Gojong under palace arrest in 1896 until he escaped to the protection of the Russian embassy.

He underscored the importance of public education, modernized industry and public hygiene. Jaisohn worked closely with American, British, Canadian, and Australian Protestant missionaries in Korea, especially American Methodist Henry G. Appenzeller. Appenzeller edited the ''Korean Repository'', a publication with a kindred spirit to the Independent. Appenzeller and Jaisohn shared information, supporting each other in their issues. Appenzeller founded and served as principal at Pai Chai Hakdong, a school for boys that spread progressive ideas among the Koreans, including student Syngman Rhee, who would become the future President of the First Republic of South Korea. Jaishon taught at the Paichai school, fully supporting the progressive agenda. Paichai served as an underground center for the Independence Movement as well.

The Independent boldly exposed the misconduct of government officials, bringing a determined effort by conservatives to eliminate Jaisohn's salaried position in the Korean government. Under the aegis of the Independence Club, Jaisohn organized the All People's Congress, an open public forum to debate political issues. Young reformers flocked to the Congress, establishing chapters nationwide.

In 1898, Conservatives in the palace accused Jaisohn and the Independence Club of plotting to overthrow the monarchy and establishing a republic. Practically, Jaisohn's call, fully supported by Appenzeller and a multitude of Korean progressives, would have led to the establishing of a Republic. That could only happen by a coup. Japan carried out the coup after defeating Russia in the Russo-Japanse War of 1905. Instead of establishing an independent republic of Korea, Japan annexed and colonized Korea for the next 40 years.

Return to the United States

In the United States, Jaisohn conducted medical research at the University of Pennsylvania and later became a successful printer and stationer in Philadelphia. When he heard the news of the March First Movement (1919), a nationwide protest ruthlessly suppressed by Japan, Jaisohn convened the First Korean Congress held in Philadelphia for three days. After the Congress, Jaisohn devoted his energies and private resources for the freedom of Korea. He organized the League of Friends of Korea in 26 cities with the help of Rev. Floyd Tomkins, established the Korean Information Bureau, and published a political journal ''Korea Review'' informing the American public of the Korean situation, seeking to persuade the United States government to support Korean independence and freedom.

After five years, in 1924, Jaisohn went legally bankrupt due to expenses from his political activities. He resumed his medical practice to make a living. At age 62, he became a student again at the University of Pennsylvania to become current with medical advances. He published five research articles in the medical journals specialized in pathology. During the World War II, he volunteered as a physical examination officer both as a loyal American and with the hope that the victory of the United States over Japan would bring freedom to Korea.

Jaisohn returned to Korea once again after Japan's defeat in the World War II. The United States Military Government, controlling the southern part of Korea, invited him to serve as the chief advisor. When the United Nations confirmed the date of the first presidential election, 3,000 supporters, including young Kim Dae Jung, petitioned Jaisohn to run for presidency. He refused after careful consideration, believing that political unity was most important for the new nation despite his uneasy relationship with the president-elect Syngman Rhee. He decided to return to the United States in 1948, passing away in 1951 during the Korean War.

The Philip Jaisohn Memorial House (Jaisohn House) served as Dr. Jaisohn's home from 1925 to 1951. Dr. Jaisohn bought the house when in great financial difficulties, pledging it as collateral for money borrowed to work for Korean independence. Philip Jaisohn Memorial Foundation acquired the house in 1987, opening to the public in 1990. Since then, the Jaisohn House has been visited by many students and politicians from Korea such as former Korean President and Nobel peace laureate Kim Dae Jung as well as Korean-American immigrants and community neighbors. The Jaisohn House is located in Media, Pennsylvania.

On May 21, 1994, the Pennsylvania Historical and Museum Commission and the Philip Jaisohn Memorial Foundation dedicated a historical marker for Dr. Jaisohn, stating:

American-educated medical doctor who sowed seeds of democracy in Korea, published its first modern newspaper (1896-98), and popularized its written language. The first Korean to earn a Western medical degree and become a U.S. citizen. He worked for Korean independence during the Japanese occupation, 1910-45. Chief Advisor to the U.S. Military Government in Korea, 1947-1948. This was his home for 25 years.

Retrieved from https://www.newworldencyclopedia.org/p/index.php?title=Philip_Jaisohn&oldid=1019113
Categories:
Hidden category:
This page was last edited on 19 March 2019, at 09:10.
Content is available under Creative Commons Attribution/Share-Alike License; additional terms may apply. See Terms of Use for details.