Papias (d. mid-second century) was one of the early literary figures of the Christian church. Recognized as a saint and martyr, his five-volume Explanation of the Sayings of the Lord, is thought to have been a prime early authority in the exegesis of the teachings of Jesus, although today it is known only through fragments quoted by later writers. The few surviving passages of Papias include sayings of Jesus that are not known from the Gospels, as well as a bizarre account concerning the fate of Judas Iscariot.

The bishop of Hierapolis, Phrygia (in modern Turkey), Papias was highly regarded by many of the early Church Fathers. According to the second century Bishop Irenaeus of Lyons, Papias was a hearer of John the Apostle. He was also said to be the companion of Polycarp of Smyrna, with whom he may have been martyred. Christian writers cited Papias’ interpretation of the Gospels though the early fourth century and beyond. The influential church historian Eusebius of Caesarea, however, wrote that Papias had been affected by a false millenarian teaching and denigrated him as simple minded. It may be for this reason that Papias' writings were not preserved. The fifth century Codex Alexandrinus states that it was Papias who transcribed the Gospel of John from John's dictation.

As one of the earliest known Christian authors, Papias is recognized as one of the Apostolic Fathers, writers believed to have known the Apostles personally. Even his few extant writings provide an important early account of the history of earliest Christianity, including the origins of the Gospels.

Polycarp of Smyrna was reportedly a companion of Papias.

Papias was the bishop of Hierapolis in modern Pamukkale, Turkey, about 22 km from Laodicea, also near Colossae, in the Lycus river valley. This location should not be confused with the Hierapolis of Syria. When he was born is uncertain, but it was probably after 70 C.E. and well before the turn of the first century. As bishop, he went out of his way to collect sayings and stories about Jesus and the earliest church from travelers.

According to Irenaeus' statement, Papias was "a hearer of John, and companion of Polycarp, a man of old time." A later tradition holds that Papias was John's disciple, to whom John dictated the fourth Gospel. He was also thought to have been martyred at the same time as Polycarp, around 155 C.E. Although this is unconfirmed, it is likely that Papias must have flourished during the first half of the second century.

Papias' Explanation of the Sayings of the Lord seems to have been not only an interpretation of Jesus' words, but also a collection of his sayings, gleaned not only from the Gospels but also from first-hand and second-hand accounts from the apostles, disciples, and other "elders" (presbyters) whom Papias encountered. Papias himself describes how he gathered his information, in an account preserved by Eusebius of Caesaria: 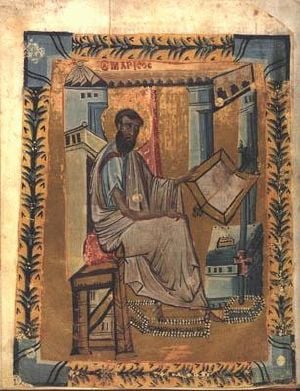 Mark and his Gospel: Papias describes Mark as writing from memory what he heard from Peter.

Papias thus reports that his information came largely from an unwritten, oral tradition of the presbyters, apparently meaning elders. However, a great deal of debate resulted from Papias' use of the term, by which he seems to mean sometimes first-generation apostles and disciples of Jesus, and sometimes other elders who were hearers of the apostles. His work thus represents a kind of "sayings" or logia tradition passed down from Jesus through the apostles and disciples. Contemporary scholars such as Helmut Koester consider him to be the earliest surviving written witness of this tradition (Koester, 1990 pp. 32f) Papias also seems to have collected stories regarding the earliest history of the church after Jesus' death.

Papias' preserved writings also provide an early testimony concerning the origins of the Gospels. He explained that Mark, whom he characterizes as the companion and Greek translator of Saint Peter, wrote the earliest Gospel after having listened to Peter relate accounts of Jesus' life and teachings during their travels together. However, Papias admits that Mark, while writing nothing "fictitious," did not record the events of Jesus' ministry in their exact order, and that he wrote from memory of Peter's teachings, not from notes. Matthew, says Papias, wrote in Hebrew, offering a different, though still sincere, interpretation of Jesus' life and teachings. The fragment preserved by Eusebius relative to this is as follows:

Mark, having become the interpreter of Peter, wrote down accurately whatsoever he remembered. It was not, however, in exact order that he related the sayings or deeds of Christ. For he neither heard the Lord nor accompanied him. But afterward, as I said, he accompanied Peter… Wherefore Mark made no mistake in thus writing some things as he remembered them. For of one thing he took especial care: Not to omit anything he had heard, and not to put anything fictitious into the statements… Matthew put together the oracles [of the Lord] in the Hebrew language, and each one interpreted them as best he could.

It is debated, however, whether the Gospels of Matthew and Mark to which Papias refers were the same as the ones we know today. In Matthew's case, for example, Papias seems to refer to a "sayings" Gospel rather than a narrative one—referring only to the "oracles" of Jesus rather than both "sayings and deeds," as in Mark's case. Also, in the case of both Gospels, scholars have noted significant differences among the earliest manuscripts, all of which postdate Papias. Thus it is impossible to know with certainty what version of either Gospel he himself knew.

Papias also related a number of traditions regarding Jesus' teaching concerning the coming Kingdom of God, characterizing it as a literal reign on earth in which fruit, grain, and animal life would be marvelously productive, and humans would enjoy delicious foods. Eusebius called these and other teachings of Papias "strange parables and teachings of the savior, and some other more mythical accounts." Regarding the latter we know that Papias related an account of Judas Iscariot immediately before his death, in which he describes Judas in gruesome detail as grotesquely swollen, putrid-smelling, and possessing huge genitalia. Papias also reported a story about a certain disciple named Justus Barsabas, who drank snake venom but suffered no harm. He also related a tale via a daughter of Philip the Evangelist concerning the resurrection of a corpse (Hist. Eccl. 3.39).

Eusebius further states that Papias "reproduces a story about a woman falsely accused before the Lord of many sins." Although Eusebius did not elaborate, biblical scholar J. B. Lightfoot identified this with the Pericope Adulterae—the story of the woman taken in adultery. Since the story does not appear in the earliest manuscripts of the Gospel of John, many scholars believe that the Pericope Adulterae must have been a later addition, and Papias seems like a likely candidate as the written source of the story. Critic Michael W. Holmes has pointed out that it is not certain "that Papias knew the story in precisely this form, inasmuch as it now appears that at least two independent stories about Jesus and a sinful woman circulated among Christians in the first two centuries of the church, so that the traditional form found in many New Testament manuscripts may well represent a conflation of two independent shorter, earlier versions of the incident" (Lightfoot, 1989, 304).

One of the Apostolic Fathers, Papias is recognized as a saint and martyr in both the Catholic and Orthodox traditions. His feast day is February 22.

It seems that the vast majority of Papias' writing was lost to history merely because he maintained an overly literalistic view of the wonders predicted during Christ's millennial reign. Eusebius of Caesaria held Papias in low esteem, calling him "a man of small mental capacity" (Hist. Eccl. 3.39.13) who took too literally the figurative language of apostolic traditions. However, many believe that Papias's millennialism may have represented an authentic trend in the actual Christianity of the sub-apostolic age, especially in western Anatolia.

Considering the important information provided by even the few fragments of his writing, it is a shame that his major work, which may have preserved many more otherwise unknown sayings of Jesus, was lost.

Quotes by and about Papias 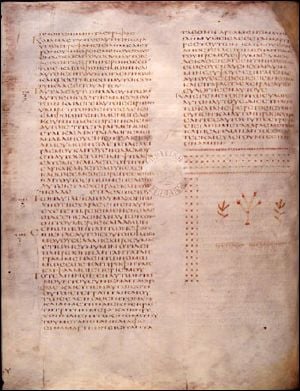 A page from the fifth century Codex Alexandrinus, which introduces the Gospel of John as having been dictated to Papias.