Oscar Hammerstein II (July 12, 1895 – August 23, 1960) was an American writer, producer, and (usually uncredited) director of musicals for almost forty years. He was twice awarded an Oscar for "Best Original Song," and much of his work has been admitted into the unofficial Great American Songbook. Oscar Hammerstein II's strength was in the lyrics and libretti which he composed for the musical theatre with melodies which were well-remembered and very singable. He wrote for all economic levels so that his music could touch as many as possible in the human family.

Born in New York City, his father, William, was from a non-practicing Jewish family; his mother, née Alice Nimmo, was the daughter of Scottish immigrants and their children were raised as Christians. His grandfather was the great opera impresario and theater builder Oscar Hammerstein I, one of the most remarkable, and most famous, personalities of his time.

Although William, father of the younger Oscar, managed the highly successful Victoria Theatre for the elder Oscar and was an innovative producer of vaudeville (he is generally credited with inventing the "pie-in-the-face" routine), he was against his son's desire to participate in the arts. Oscar II therefore entered Columbia University under their pre-law program and it wasn't until his father's death on June 10, 1914, that he went on to participate in his first play with the Varsity Show entitled On Your Way.

Throughout the rest of his college career the younger Hammerstein wrote and performed in several Varsity Shows. After quitting law school to pursue theater, Hammerstein began his first real collaboration with Herbert Stothart, Otto Harbach, and Frank Mandel. He began as an apprentice, and went on to form a 20 year collaboration with Harbach. Out of this collaboration came his first musical, Always You, for which he wrote the book and lyrics. It opened on Broadway in 1921. 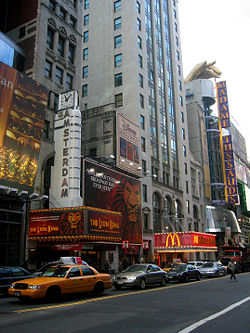 Throughout the next forty years of his life, he would team with many others including a successful collaboration with composer Jerome Kern producing such musicals as Sweet Adeline, Music In the Air, Three Sisters, Very Warm for May, and their biggest hit, Show Boat, in 1927. Show Boat, often revived, is still considered to be one of the masterpieces of the American musical theatre. Other collaborators include Vincent Youmans with Wildflower, Rudolf Friml with Rose Marie, and Sigmund Romberg with The Desert Song and The New Moon. Hammerstein's most successful and sustained collaboration however, came in 1943 when he teamed up with Richard Rodgers to write a musical adaptation of the play Green Grow the Lilacs. Rodgers' first partner, Lorenz Hart, was originally going to join in the collaboration but was too deeply entrenched in alcoholism to be of any use. The result of the new Rogers and Hammerstein collaboration was Oklahoma!, a show which revolutionized the American musical theatre by tightly integrating all the aspects of musical theater, with the songs and dances arising out of the plot and characters. It also began a partnership which would produce such classic Broadway musicals as Carousel, South Pacific, The King and I, Me & Juliet, Pipe Dream, Flower Drum Song, and The Sound of Music as well as the musical film State Fair (and its stage adaptation of the same name) and the television musical Cinderella, all of which were featured in the revue A Grand Night for Singing. Hammerstein also produced the book and lyrics for Carmen Jones, an adaptation of Georges Bizet's opera Carmen with an all-black cast.

Hammerstein is the only person named Oscar ever to win an Oscar (Academy Award). He won two Oscars for best original song—in 1941 for "The Last Time I Saw Paris" in the film Lady Be Good, and in 1945 for "It Might As Well Be Spring" in State Fair. In 1950, the team of Rodgers and Hammerstein received The Hundred Year Association of New York's Gold Medal Award "in recognition of outstanding contributions to the City of New York."

Hammerstein died of stomach cancer in his home in Doylestown, Pennsylvania at the age of 65, shortly after the opening of The Sound of Music on Broadway, thus ending one of the most remarkable collaborations in the history of the American musical theatre. The final song he wrote was "Edelweiss" which was added during rehearsals near the end of the second act. To this day, many think it is an Austrian folk song. Sadly, he never lived to see The Sound of Music made into the 1965 film adaptation which became internationally loved, won the Academy Award for Best Picture, and became perhaps his most well-known legacy.

Universally mourned, with the lights of Times Square and London's West End being dimmed in recognition of his contribution to the musical, he was interred in the Ferncliff Cemetery in Hartsdale, New York. He was survived by his second wife Dorothy Blanchard Jacobson and his three children, William and Alice by first wife Myra Finn and James by Jacobson.

Oscar Hammerstein II is today considered one of the most important figures in the history of American musical theater. He was probably the best "book writer" in Broadway history—he made the story, not the songs or the stars, central to the musical, and brought it to full maturity as an art form. His reputation for being "sentimental," is based largely on the movie versions of the musicals, especially The Sound of Music. As recent revivals of Show Boat, Oklahoma!, Carousel, and The King and I in London and New York show, Hammerstein could be very tough-minded indeed. Oscar Hammerstein believed in love; however, he did not believe that it would always end happily.