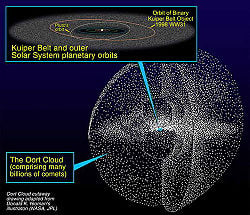 There is a theory that periodic (every about 30 million years) disturbances of the Oort cloud by nearby star have been inducing massive falls of comets onto the Earth that caused mass extinction of life on Earth. If that is true, the Oort cloud is very significant in influencing the evolution of life on Earth (by supplying water and destroying life) as well as preserving primitive materials, from which planetary scientists can study the origin and evolution of the Solar System. 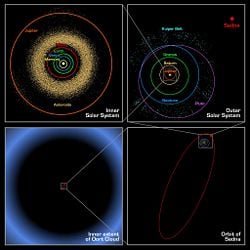 In 1932, Ernst Öpik, an Estonian astronomer, proposed[1] that comets originate in an orbiting cloud situated at the outermost edge of the solar system. In 1950 the idea was revived and proposed[2] by Dutch astronomer Jan Hendrick Oort to explain an apparent contradiction: comets are destroyed by several passes through the inner solar system, yet if the comets we observe had really existed for billions of years (since the generally accepted origin of the solar system), all would have been destroyed by now. According to the hypothesis, the Oort cloud contains millions of comet nuclei, which are stable because the sun's radiation is very weak at their distance. The cloud provides a continual supply of new comets, replacing those that are destroyed. It is believed that if the Oort cloud exists and supplies comets, in order for it to supply the necessary volume of comets, the total mass of comets in the Oort cloud must be many times that of Earth. Estimates range between five and 100 Earth masses.[3]

The Oort cloud is thought to be a remnant of the original solar nebula that collapsed to form the Sun and planets approximately 4.6 billion years ago, and is loosely bound to the solar system.

The most widely-accepted hypothesis of its formation is that objects in the Oort cloud initially formed much closer to the Sun as part of the same process that formed the planets and asteroids, but that gravitational interaction with young gas giants such as Jupiter ejected them into extremely long elliptical or parabolic orbits. This process also served to scatter the objects out of the ecliptic plane, explaining the cloud's spherical distribution. While on the distant outer regions of these orbits, gravitational interaction with nearby stars further modified their orbits to make them more circular.

It is thought that other stars are likely to possess Oort clouds of their own, and that the outer edges of two nearby stars' Oort clouds may sometimes overlap, causing perturbations in the comets' orbits and thereby increasing the number of comets that enter the inner solar system.

The known star with the greatest possibility of perturbing the Oort cloud in the next 10 million years is Gliese 710. However, physicist Richard A. Muller and others have postulated that the Sun has a heretofore undetected companion star in an elliptical orbit beyond the Oort cloud based on the records of heavy bombardments on the Earth that caused mass extinctions.[6] This star, known as Nemesis, is theorized to pass through a portion of the Oort cloud approximately every 26 million years, bombarding the inner solar system with comets. Although the theory has many proponents, no direct proof of the existence of Nemesis has been found.

90377 Sedna's orbit that ranges from roughly 76 to 925 AU, does not carry it completely out to the assumed position of the Oort cloud and is too far out for it to be truly considered as a Kuiper belt object. If Sedna indeed belongs to the Oort cloud, this may mean that the Oort cloud is both denser and closer to the Sun than previously thought.