Olexandr Petrovych Dovzhenko (Ukrainian: Олександр Петрович Довженко, Russian: Александр Петрович Довженко; also referred to as Oleksandr, Aleksandr, Alexander, or Alexandre Dovjenko) (September 10 [O.S. August 29] 1894 – November 25, 1956) was a writer, producer, and director of films, and is often cited as one of the most important early Soviet filmmakers, alongside Sergei Eisenstein and Vsevolod Pudovkin, whose films often celebrated the lives and work of his fellow Ukrainians. Dovzhenko's films were popular but ran into trouble with the Soviet authorities. They were not considered sufficiently doctrinaire and did not conform to the Soviet policy of Socialist realism.

Olexandr Dovzhenko was born in the district of Viunyshche in Sosnytsia, a townlet in the Chernihiv oblast of present-day Ukraine (at the time a part of Imperial Russia), to Petro Semenovych Dovzhenko and Odarka Ermolaivna Dovzhenko. (His ancestors were Cossacks who settled in Sosnytsia in the eighteenth century, coming from the neighboring province of Poltava.) Olexandr was the seventh of fourteen children, but due to the horrific rate of child loss he became the oldest child by the time he turned eleven.

Although his parents were uneducated, Dovzhenko's semi-literate grandfather encouraged him to study, leading him to become a teacher at the age of 19. He escaped military service during both World War I and the Russian Revolution because of a heart condition, but did join the Communist party in the early 1920s. He even served as an assistant to the Ambassador in Warsaw as well as Berlin. Upon his return to the Ukraine in 1923, he began illustrating books and drawing cartoons in Kiev.

Dovzhenko turned to film in 1926 when he landed in Odessa. His ambitious drive led to the production of his second-ever screenplay, Vasya the Reformer (which he also co-directed). He gained greater success with Zvenigora in 1928 which established him as a major filmmaker of his era. His "Ukraine Trilogy," which included Arsenal and Earth, went under-appreciated by contemporary Soviet critics (who found some of its realism counter-revolutionary), but remains his most well-known work in the West. 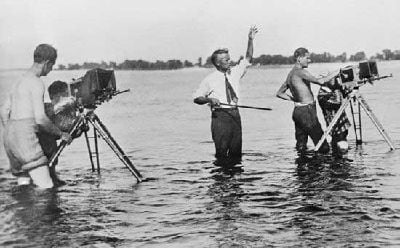 Although he served as a wartime journalist for the Red Army during World War II, Dovzhenko began to feel ever more oppressed by the bureaucracy of Stalin's Soviet Union. After spending several years writing, co-writing, and producing films at Mosfilm Studios in Moscow, he turned to writing novels. Over a 20-year career, Dovzhenko personally directed only seven films.

Dovzhenko died of a heart attack on November 25, 1956 in Moscow.

Dovzhenko's "Ukraine Trilogy" is seen by many as three of the greatest films ever made.

Zvenigora, or Zvenyhora (Russian and Ukrainian: Звенигора) (1928), was a silent revolutionary epic, Dovzhenko's initial film in his "Ukraine Trilogy" (along with Arsenal and Earth). It is almost religious in its tone, relating a millennium of Ukrainian history through the story of an old man who tells his grandson about a treasure buried in a mountain. Although Dovzhenko referred to Zvenigora as his "party membership card," it is full of Ukrainian myth, lore, and superstition. The magical recurrences and parallels used in the storytelling also invites comparisons to Nikolai Gogol.

Arsenal (Russian and Ukrainian: Арсенал) (1928) is regarded by film scholar Vance Kepley, Jr. as "one of the few Soviet political films which seems even to cast doubt on the morality of violent retribution." The second film in Dovzhenko's "Ukraine Trilogy," it was originally commissioned as a feature that would glorify the battle in 1918 between Bolshevik workers at a Kiev munitions plant and White Russian troops. Dovzhenko's eye for wartime absurdities (for example, an attack on an empty trench) anticipates later pacifist sentiments in films by Jean Renoir and Stanley Kubrick. It is an amazing, wondrous, and deeply profound work that more than a few viewers feel to be the finest of the director's "Ukraine Trilogy."

Earth (Russian and Ukrainian: Земля, translit. Zemlya literally translated "Soil") (1930) concerns an insurrection by a community of farmers, following a hostile takeover by Kulak landowners. It is Part 3 of Dovzhenko's "Ukraine Trilogy."

Earth was simultaneously lauded and derided by Soviet authorities due to its fairly ambiguous political message. Soviet influence is clear if one looks for it, particularly in the nearness to the "earth" of the peasants, but exactly why or how the symbol functions is unclear. Indeed, the film also deals with subjects such as death, destruction, and poverty.

Earth is considered by many as Dovzhenko's best film, and is often cited alongside Eisenstein's The Battleship Potemkin (1925) as one of the most important films of the Soviet era. Unfortunately, there are no high-quality prints of Earth available for viewing. The best print available is the Kino version which is still below standard though it is watchable. Dovzhenko was one of the greatest film directors of the Soviet era. He was not a doctrinaire communist, and his work was criticized for its less than enthusiastic portrayal of communist virtues. He was a mentor to the young Ukrainian filmmakers Larisa Shepitko and Sergey Paradzhanov, as well as his wife, Yulia Solntseva, who continued his legacy by producing films of her own and completing projects Dovzhenko was not able to create.

The Dovzhenko Film Studios in Kyiv were named after him in his honor following his death.