The Oklahoma City National Memorial is the largest memorial of its kind in the United States. It honors the victims, survivors, rescuers, and all who were touched by the Oklahoma City bombing of April 19, 1995. The memorial is located in downtown Oklahoma City on the former site of the Alfred P. Murrah Federal Building, which was destroyed in the 1995 bombing.

The Oklahoma City bombing was a shocking act of terrorism that shook the nation. Destroying the Alfred P. Murrah Federal Building, it claimed 168 lives and left over 800 people injured. The Memorial's focus is to educate visitors about the impact of violence and to inspire hope and healing through lessons learned by those affected. The organizers and supporters of the memorial recognize the relevance of knowing history as a means of education toward a more successful future, one steeped in peace and goodwill. In that respect, the purpose of the memorial is to foster peace over pandemonium, hope over hatred, and cooperation in the place of conflict. 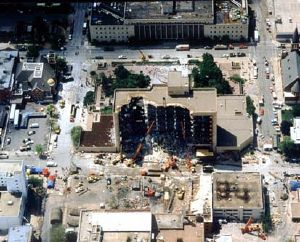 An aerial view of the destruction of the Alfred P. Murrah Federal Building in Oklahoma City, Oklahoma.

The Oklahoma City bombing was a domestic terrorist attack that occurred on April 19, 1995, aimed at the U.S. government in which the Alfred P. Murrah Federal Building, an office complex in downtown Oklahoma City, Oklahoma, was bombed. The attack claimed 168 lives and left over 800 people injured. It was the first major terrorist attack and until the September 11, 2001 attacks, it was the deadliest act of terrorism on U.S. soil.

Shortly after the explosion, Oklahoma State Trooper Charlie Hanger stopped 26-year-old Timothy McVeigh for driving a vehicle that had no license plate and arrested him for that offense and for unlawfully carrying a weapon.[1] Within days after the bombing, McVeigh and Terry Nichols were both arrested for their roles in the bombing. Investigators determined that they were sympathizers of a militia movement and that their motive was to retaliate against the government's handling of the Waco and Ruby Ridge incidents (the bombing occurred on the anniversary of the Waco incident). McVeigh was executed by lethal injection on June 11, 2001. Nichols was sentenced to life in prison. A third conspirator, Michael Fortier, who testified against McVeigh and Nichols, was sentenced to 12 years in prison for failing to inform the U.S. government of his prior knowledge of the plans.

The attacks led to widespread rescue efforts from local, state, and federal and worldwide agencies, along with considerable donations from across the country. As a result of the destruction of the Alfred P. Murrah Federal Building, the U.S. government passed legislation designed to increase protection around federal buildings and to thwart future terrorist attacks. Under these measures, law enforcement has since foiled sixty domestic terrorism plots.[2] 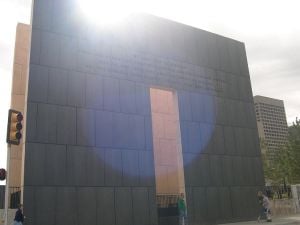 The western Gate of Time. 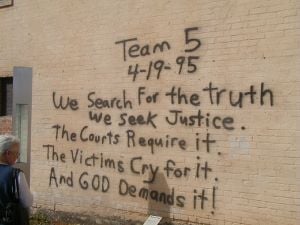 Rescue Team 5 remembers the victims who died in the bombing.

In the months following the bombing, overwhelming support for the creation of a permanent memorial at the Murrah Building site was voiced. Oklahoma City's mayor, Ron Norick, appointed a task force of 350 members to explore the most appropriate way to memorialize those who died in the incident. The Memorial Mission Statement calls for a memorial that would "remember those who were killed, those who survived and those changed forever".[3]

The Task Force determined there were three major components that should be met in the finished memorial:

In September 1996, the Oklahoma City National Memorial Foundation was created from the families who lost loved ones in the bombing, survivors of the bombing, rescue workers and volunteers who participated in the rescue and recovery efforts, and community volunteers.

Design concepts for the outdoor memorial were solicited and 624 entries arrived from all 50 states and 23 countries. Following public display, the field was narrowed to five designs, with the final selection made in July 1997. The proposal created by Butzer Design Partnership then of Berlin, Germany, was chosen Designers Hans and Torrey Butzer with Sven Berg created the memorial.[3]

On April 19, 2000, the Oklahoma City National Memorial was dedicated on the site of the Murrah Federal Building to commemorate the victims of the bombing. Annual remembrance services are held at the time of the explosion. 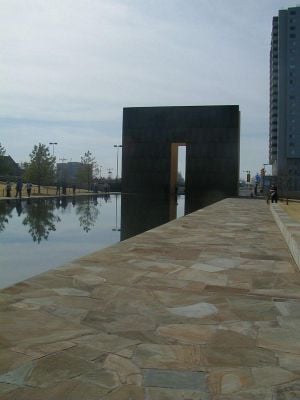 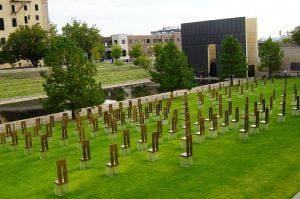 The Field of Empty Chairs, east Gate of Time, and Reflecting Pool at the Oklahoma City National Memorial. 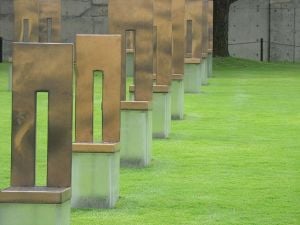 A closeup of the Field of Empty Chairs. 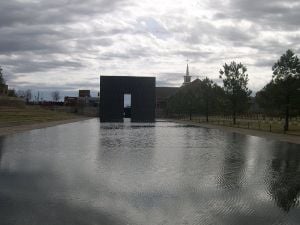 The Reflecting Pool at the Oklahoma City National Memorial 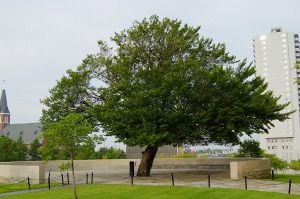 After surviving the bombing, The Survivor Tree elm became an emblem of the Memorial. 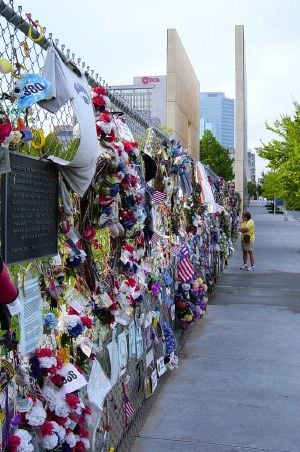 The Memorial Fence and east Gate of Time.

The outside of each gate bears this inscription:

We come here to remember, Those who were killed, those who survived and those changed forever. May all who leave here know the impact of violence. May this memorial offer comfort, strength, peace, hope and serenity.

The force of the blast ripped most of the branches from the Survivor Tree, glass and debris were imbedded in its trunk and fire from the cars parked beneath it blackened what was left of the tree. Most thought the tree could not survive. However, nearly a year after the bombing, family members, survivors and rescue workers who gathered for a memorial ceremony under the tree noticed it was beginning to bloom again. In that instant the tree became a symbol of what the city had come through. Like the tree, the city had been bent and bowed but it had not been broken. The tree and the city survived. The Survivor Tree now thrives, in no small part because the specifications for the Outdoor Memorial design included a mandate to feature and protect the Tree. One example of the dramatic measures taken to save the Tree: one of the roots that would have been cut by the wall surrounding the Tree was placed inside a large pipe, so it could reach the soil beyond the wall without being damaged. A second example is the decking around the Tree, which is raised several feet to make an underground crawlspace; workers enter through a secure hatchway and monitor the health of the Tree and maintain its very deep roots.

The inscription around the inside of the deck wall around the Survivor Tree reads:

"The spirit of this city and this nation will not be defeated; our deeply rooted faith sustains us."

Hundreds of seeds from the Survivor Tree are planted annually and the resulting saplings are distributed each year on the anniversary of the bombing. Thousands of Survivor Trees are growing today in public and private places all over the United States; saplings were sent to Columbine High School after the massacre there, to New York City mayor Rudolph Giuliani after the September 11, 2001 attacks, the Virginia Tech massacre in 2007, and various times.

As part of the 10th anniversary commemoration of the bombing in 2005, the Reflections of Hope Award was established. The award honors a living person or organization whose works exemplify core beliefs of the Oklahoma City National Memorial Foundation: "that hope can survive and blossom amidst the tragedy and chaos of political violence and that, even in environments marred by such violence, peaceful, nonviolent approaches provide the best answers to human problems."[4]

The award recognizes those from around the world who work in the spirit of peace, going beyond the boundaries of politics, religion, race, or nationality, which are often the motivating factors of terrorism.

Retrieved from https://www.newworldencyclopedia.org/p/index.php?title=Oklahoma_City_National_Memorial&oldid=1087869
Categories:
Hidden category:
This page was last edited on 18 November 2022, at 00:02.
Content is available under Creative Commons Attribution/Share-Alike License; additional terms may apply. See Terms of Use for details.