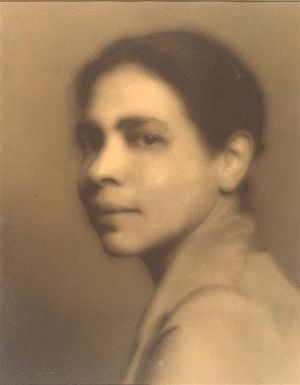 Nellallitea 'Nella' Larsen (April 13, 1891 – March 30, 1964) was a mixed-race novelist of the Harlem Renaissance, an era marked by a creative flourish among African-American artists in Harlem. As a writer, Larsen showed early promise, but she only published two novels and a few short stories. Though her literary output was scant, critical consensus is that what she wrote was of extraordinary quality and had a psychological depth only more recently appreciated.

Celebrated for her preoccupation with mixed-race protagonists, Larsen displayed clarity of vision despite the complexities of her subject matter. Larsen lived at the time where debates were common about black literature advancing the cause of blacks by projecting positive images of blacks as accomplished, decent and therefore worthy of full class citizenship, and a time where black writers were sometimes criticized for selling out to white bohemians who associated with black artists.

She and the characters in her books wrestled with racial identity and class alienation but they also wrestled with the basic fear of rejection and abandonment by loved ones, which are universal themes that transcend gender and race. Her work has earned recognition from contemporaries as well as present-day scholars.

Nella Larsen was born Nellie Walker in Chicago on April 13, 1891. Her mother, Marie Hanson, was a Danish immigrant domestic case worker. Her father, Peter Walker, was a black West Indian from Saint Croix. Her father soon disappeared from the picture and her mother married Peter Larsen, whose surname Nella adopted. Her stepfather and her mother also had a daughter, Nella’s half-sister.

As a child, Larsen experienced struggles as the lone mixed-race member of the household. As the racial lines in Chicago became more and more rigid, the family found it difficult finding racially-accepting neighborhoods. Later Larsen left Chicago and lived several years with her mother's relatives in Denmark. In 1907-08, she briefly attended Fisk University, in Nashville, Tennessee, a historically Black University, which at that time had an entirely Black student body. Biographer George Hutchinson speculates that she was expelled for some violation of Fisk's very strict dress or conduct codes.[1] In 1910 she returned to Denmark, auditing courses at the University of Copenhagen for two years.

By 1912, Larsen had moved to New York City to study nursing at Lincoln Hospital. Upon graduating in 1915, she went South to work at the Tuskegee Institute in Tuskegee, Alabama where she became head nurse at a hospital and training school. While in Tuskegee, she came in contact with Booker T. Washington's model of education and became disillusioned with it. (Washington died shortly after Larsen arrived in Tuskeegee.) Working conditions for nurses were poor—their duties included doing hospital laundry—and Larsen was left exhausted, prompting her to resign in 1916, and return to New York to work again as a nurse. After working as a nurse through the Spanish flu pandemic, she left nursing and became a librarian.

In 1919, she married Elmer Samuel Imes, a prominent physicist who was the second African-American to receive a PhD in physics. They moved to Harlem, where Larsen took a job at the 135th Street branch of the New York Public Library (NYPL). In the year after her marriage, she began to write, publishing her first pieces in 1920.

Certified in 1923 by the NYPL's library school, she transferred to a children's librarian's position in Manhattan's Lower East Side. Her marriage to Imes ensured her entry into the black professional middle class, and she became acquainted with Walter White, W.E.B. Du Bois, and James Weldon Johnson of the NAACP. In 1926, having made friends with important figures in the Negro Awakening that became the Harlem Renaissance, Larsen gave up her work as a librarian and began to work as a writer active in the literary community, her first story being printed in January of that year.

In 1928, at the urging of Walter White, Larsen wrote her first novel, Quicksand, a largely autobiographical novel. A first draft was written over a brief period, and was first published on March 20, 1928, receiving significant critical acclaim, if not great financial success.

Nella Larsen's first novel tells the story of bi-racial Helga Crane, a fictional character clearly based on Larsen herself. Crane is the daughter of a Danish mother and a black father, who goes to various places and communities in search of somewhere she feels comfortable and at peace. Her travels bring her in contact with many of the communities Larsen herself knew. She begins in "Naxos," a Southern Negro school based on Tuskegee University, where she finds herself unsatisfied with the complacency of those around her, mentioning a sermon by a white preacher telling them that their segregation of themselves into black schools was good sense, and that to strive for equality would result in them becoming avaricious. In her travels, Helga finds herself in Chicago, where her white relatives shun her. In Harlem, she finds a refined but often hypocritical black middle class obsessed with the "race problem." In Copenhagen, she is treated as a highly desirable racial exotic; and finally the poor deep South, where she is disillusioned by people's blind adherence to religion. In each of these searches, Helga fails to find fulfillment.

To complement her struggle with her own racial identity and its manifestation in the constant disappointments of the external social world, Helga also struggles in love. Larsen chronicles Helga's search for a marriage partner; the novel opens with her engaged to a prestigious Southern Negro man she does not really love, sees her turn down the proposal of a famous European artist, and ends with her seducing and marrying a Southern preacher. The novel's close is deeply pessimistic as Helga sees what began as sexual fulfillment turn into an endless chain of pregnancies and suffering. Larsen's bleak ending to the novel has Helga ultimately damned by her inability to reconcile the social conundrum of her mixed-race identity with her own personal ambitions.

In 1929, Larsen published Passing, her second novel, a story of two light-skinned women, childhood friends Irene Redfield and Clare Kendry. Both women are of mixed heritage and are light enough to pass as white. Irene becomes the socialite wife of a prominent doctor in New York City. Clare fully commits herself to passing as white and avoids a life of toil by marrying John Bellew, a racist white man who calls her "Nig," with affection, not knowing her true heritage. He derives the nickname from the fact that, as she's gotten older, to his eyes her skin has slightly darkened. The novel centers on the meeting of the two childhood friends later in life, the different circumstances of their "passing," and the unfolding of events as each woman is seduced by the other's daring lifestyle. In Passing, Larsen traces a tragic path as Irene becomes paranoid that her husband is having an affair with Clare, though the reader is never told whether her fears are justified or not, and numerous clues point in both directions. At the novel's famously ambiguous end, Clare's race is revealed to John Bellew, and Clare "falls" out a high window to her sudden death. Critical debate ponders both the possibility that Irene pushed Clare out the window and the possibility that Clare willingly jumped on her own accord.

In 1930, Larsen published Sanctuary, a short story that caused her to be accused of plagiarism. A reader saw a resemblance in Sanctuary to Sheila Kaye-Smith's Mrs. Adis. Kaye-Smith was an English writer, mainly on rural themes, and very popular in the United States. Sanctuary’s basic plot, and a little of the descriptions and dialog were virtually identical. Compared to Kaye-Smith’s tale, Sanctuary was longer, better written and more explicitly political, specifically around issues of race, rather than class as in Mrs. Adis. Larsen reworked and updated the tale into a modern American black context. Much later Sheila Kaye-Smith herself wrote in All the Books of My Life (Cassell, London, 1956) that she had in fact based Mrs. Adis on an old story by St. Francis de Sales. It is unknown whether she ever knew of the Larsen controversy. Larsen was able to exonerate herself, with confirmation from editors who had viewed early drafts of the story.

Despite having cleared her name, Larsen lost some confidence in her writing during the ordeal and due to the breakup of her marriage, and she found her subsequent travels in Europe, under a prestigious Guggenheim Fellowship, to be fruitless. She spent time in Mallorca and Paris working on a novel about a love triangle among the three white protagonists; the book was never published. Upon returning from Europe, she initially remained committed to her craft, but did not publish any work.

Larsen returned to New York in 1933 after her divorce to Imes was complete. She lived on alimony until her ex-husband's death in 1942; by then she had stopped writing, and was believed to have been addled by addiction. In order to support herself, she returned to work as a nurse, which seemed to lift her from her depression. She disappeared from the literary circles in which she previously thrived. She retired to the Lower East Side, and did not venture to Harlem. She was found dead in her apartment at the age of 72.

In addition to being the first African-American woman awarded a Guggenheim Fellowship for creative writing, Larsen won a Harmon Foundation prize for her widely-acclaimed novel Quicksand.[2] Though her second novel Passing received less enthusiastic praise, it was widely read and has recently received a great deal of attention because of its close attention to racial and sexual ambiguities. It has now achieved canonical status in many American universities.

Retrieved from https://www.newworldencyclopedia.org/p/index.php?title=Nella_Larsen&oldid=1086984
Categories:
Hidden category:
This page was last edited on 11 November 2022, at 16:12.
Content is available under Creative Commons Attribution/Share-Alike License; additional terms may apply. See Terms of Use for details.