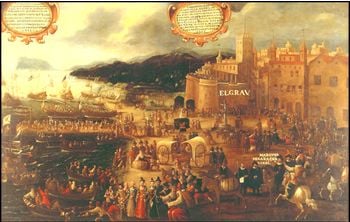 Embarkation of Moriscos in Valencia by Pere Oromig

Armed resistance of the Moriscos against their forced explusion

Moriscos (Spanish ""Little Moors") or Mouriscos (Portuguese) were Spanish Muslims who converted to Catholicism during the Reconquista of Spain. The term later became a pejorative applied those who had outwardly converted but secretly continued to practice Islam.

Muslim communities were usually granted religious freedom until the late fifteenth century. This policy changed when Christian authorities in Spain began pressuring Muslims to convert, using such methods as forced conversions, the education of Morisco children in Catholic schools, and the mobilization of the Spanish Inquisition to investigate suspected secret Muslims.

Many Moriscos, however, continued to practice Islam in secret. The continuing vitality of Islamic culture and religion among the Moriscos became a matter of concern for rulers such as Emperor Charles V of the Holy Roman Empire and Philip II of Spain. After several major waves of persecution by the Inquisition and regional expulsions ordered by the government, Philip III of Spain finally determined to expel the remaining Morisco population by decree in 1610. Migration was forced and involved hundreds of thousands of people. Most of the Moriscos made their way to lands controlled by the Ottoman Empire and North Africa. Some settled in France and a number remained in Spain as practicing Christians.

Progress of the reconquista: Muslim territory is shown in light green. 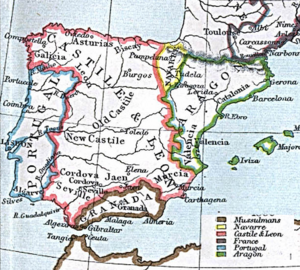 Spain in 1360. Granada finally fell to the Spanish in 1492, but became a hotbed of Islamic and Morisco resistance.

The reconquest of formerly Christian Spain and Portugal from the Muslims was accomplished over several centuries, with the last Muslim stronghold, Granada, falling in 1492. Muslim converts to Christianity were known as Moriscos, while Muslims who submitted to Christian rule but retained the Muslim faith were called Mudéjars. However, many Moriscos continued to remain crypto-Muslims, just as many Jewish conversos had secretly continued to practice Judaism.

The exact status of the Mudéjars and Moriscos depended on various capitulation pacts and later royal decrees. In Aragon (1118) and Valencia (1238) Muslims who agreed to accept Christian rule were granted freedom to practice their faith. Likewise, after the fall of the city of Granada in 1492, the Treaty of Granada guaranteed the Muslim population the right of religious freedom. However, that promise was short-lived. When Muslims reacted against peaceful conversion efforts on the part of Granada's first archbishop, Hernando de Talavera, the future Cardinal Cisneros took more forceful measures as the century drew to a close: Forced conversions, burning Islamic texts, and the prosecution of some of Granada's leading Muslims.

In response to these and other violations of the treaty, Granada's Muslim population rebelled in 1499. The revolt, which lasted until early 1501, gave the Spanish authorities an excuse to void the remaining terms in Granada's treaty of surrender. In 1501, Granada's Muslims were given the ultimatum of either converting to Christianity or leaving. Most did convert, but usually only superficially, continuing to dress, write, and speak as they had before, and to practice Islam in secret. In 1502, the ultimatums were extended to the Muslims of Castile and Leon. The Muslims of Navarre had to convert or leave by 1515, and those of Aragon by 1525. Additional restrictive legislation was introduced at the national level in 1526 and 1527 under Holy Roman Empire's Emperor Charles V. However, wealthy Moriscos were able to buy exemptions to restrictions against them. 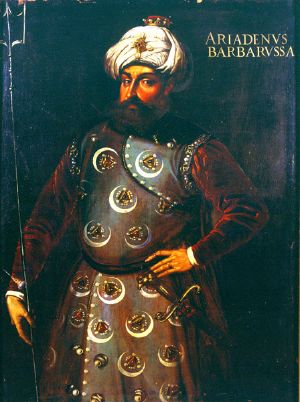 The Turkish Muslim privateer Barbarossa Hayreddin, whose mother had been a Christian, helped thousands of Moriscos escape persecution in Andalusia.

In August 1529 the Turkish Muslim privateer Barbarossa Hayreddin attacked the Mediterranean coasts of Spain and helped some 70,000 Muslims and Moriscos escape from Andalusia in seven consecutive journeys. The sympathy of the Moriscos with such "pirates" worsened their reputation among Spanish Christians.

In 1567, Philip II of Spain issued an order requiring Moriscos throughout the kingdom to give up their Muslim names and traditional Muslim dress, and prohibited the speaking of Arabic. An edict requiring Morisco parents to surrender the education of their children to Christian priests led to an uprising in the Alpujarras from 1568 to 1571, resulting in the forced resettlement of the Moriscos of Granada, often to the kingdom of Valencia. Only a few Moriscos, those who had collaborated with the royal forces during this revolt, were permitted to remain in the city and territory of Granada. The relocation also affected the Moriscos of Castile, who were quite assimilated by that time. During this time, the Spanish Inquisition intensified its attention toward the Moriscos. From 1570, cases involving Moriscos whose conversion were suspect became predominant in the tribunals of Zaragoza, Valencia, and Granada. In the tribunal of Granada, between 1560 and 1571, 82 percent of those accused by the Inquisition were Moriscos.

In Spain's conflict with the Ottoman Empire, the Moriscos were also suspected of being a Muslim fifth column, aiding the Barbary pirates, and conspiring against Spain. Spies reported that the Ottoman Emperor Selim II (reigned 1566-1574) was planning to attack Malta and later Spain, a strategy which would allegedly involve inciting an uprising among Spanish Muslims and Moriscos. King Philip II, thus, enacted additional restrictive measures against them.

However, many of the Muslims and Moriscos had risen to positions of wealth and prominence, and wielded considerable counteracting influence. Aragonese and Valencian nobles in particular appreciated their contribution and tried to protect them from expulsion, advocating a line of patience and religious instruction. Toward the end of the sixteenth century, Morisco writers sought to challenge the perception of their culture as alien to Spain with literary works presenting a version of early Spanish history in which Arabic-speaking Spaniards played a positive and major role.

Meanwhile, some Moriscos indeed fought against Christians as corsairs based at Algiers, Cherchell, and Salé. Others became mercenaries in the service of the Moroccan sultan, crossing the Sahara, and conquering Timbuktu and the Niger Curve in 1591. 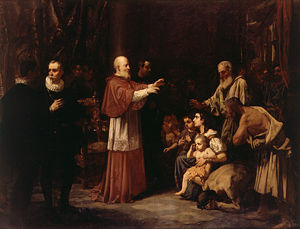 In Valencia, the Catholic preacher Juan de Ribera came to the conclusion that it would ultimately be impossible to bring the majority of Moriscos to the point of authentic conversion. Determined to persuade the king to banish them, he portrayed the Moriscos as traitors and heretics, justifying their complete expulsion as the logical conclusion of of the reconquista.

The crown ultimately agreed, deciding that the Moriscos were fundamentally untrustworthy and too troublesome to tolerate. The Moriscos were thus forcibly expelled from Spain between 1609 and 1614 by Philip III, at the instigation of the Duke of Lerma. Estimates for this second wave of expulsion have varied with some contemporary accounts setting the number at around 300,000 (about 4 percent of the Spanish population), a majority of which were expelled from what is today Aragon, Catalonia, and Valencia. 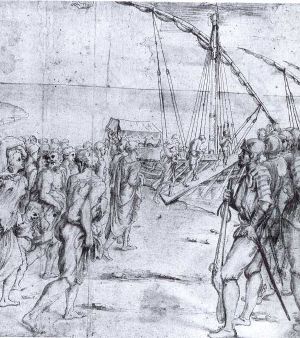 The arrangements for the expulsion of Morisco children presented Catholic Spain with a dilemma, as they had all been baptized, and consequently could not be legally transported to Muslim lands. Some authorities proposed that children should be forcibly separated from their parents, but this proved to be impractical, not to mention its moral implications. Consequently, families remained together for the most part, with the official destination of the deportees generally stated to be France. Most of these, however, soon continued on to Africa and the Ottoman Empire, with about 40,000 settling in France permanently. Those Moriscos who sincerely wished to remain Catholic were usually able to find new homes in Italy, but the overwhelming majority of Moriscos settled in Muslim-held lands.

A substantial number of Moriscos were also able to remain in Spain, camouflaged among the Christian population. Some, whose conversion to Christianity was genuine, stayed on for religious reasons, others mainly for economic reasons or as a matter of convenience. It is estimated that, in the kingdom of Granada alone, between 10,000 and 15,000 Moriscos remained after the general expulsion of 1609-10.

Miguel de Cervantes' writings, such as Don Quixote and Conversation of the Two Dogs, offered interesting views of Moriscos. In the first part of Don Quixote, which takes place before the expulsion of 1609-10, a Morisco translates a found document containing the Arabic history that Cervantes is described as "publishing."

In the second part, after the expulsion, the character Ricote is a Morisco and a good mate of Sancho Panza. He cares more about money than religion, however, and thus leaves for Germany, returning later as a false Christian pilgrim with the purpose of recovering treasure that he has buried. He admits, however, that expulsion of the Moriscos is just. His daughter, María Félix, is brought to Berbery but suffers, since she is a sincere Christian.

Morisco is sometimes applied to other historical crypto-Muslims, in places such as Norman Sicily, ninth century Crete, and other areas, along the medieval Christian-Muslim frontier.

In the racial classification of colonial Spanish America, morisco was used for a certain combination of European and African ancestry, regardless of religion, similar to the classification mulatto.