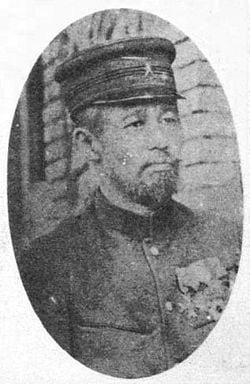 Mori Ōgai (森 鷗外 / 森 鴎外) (February 17, 1862 – July 8, 1922) was a Japanese physician, translator, novelist and poet. Mori's real name was Rintarō (林太郎). Ōgai is correctly written 鷗外 but 鴎外 is often used in its place. A writer of the Meiji period (1867–1912), during which Japan was cautiously exchanging technology and cultural ideas with the West, Mori combined an understanding of Western values with Japanese loyalty to traditional duty, influencing the direction of modern Japanese fiction.

From 1884 to 1888, Mori studied medicine in Germany. In 1890 he published Maihime (“The Dancing Girl”), the story, based on his personal experiences, of an unhappy relationship between a Japanese student and a German girl. It started a trend of autobiographical revelations among Japanese writers and represented a departure from the impersonal fiction of preceding generations. Gan (“Wild Geese,” 1911–1913), his best-known work, tells the story of the undeclared love of a moneylender’s mistress for a medical student who passes by her house each day. Mori also wrote poetry and historical biographies, and translated the works of several European authors, including Hans Christian Anderson’s autobiographical novel Improvisatoren. 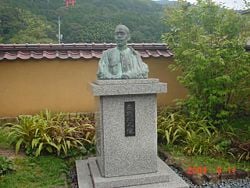 Mori Ōgai, the pen name of Mori Rintaro, was born February 17, 1862, into a family of doctors in the small town of Tsuwano in western Japan (now Shimane prefecture). His father was physician to the daimyo, or feudal lord. His mother was a strict disciplinarian who pushed Mori to pursue academic excellence throughout his youth. Mori began the study of Confucius and Mencius at age five and entered the fief school at seven, where he excelled in the study of Chinese philosophers, mathematics, medicine, and Dutch.

Mori followed his father to Tokyo in 1872, and the rest of the family joined them the next year. In 1874, Mori added two years to his age in order to enroll in the preparatory course for the medical department at Tokyo University. His father began a private medical practice in downtown Tokyo. Privately, Mori learned to compose tanka poetry and Chinese poems. He translated Asagao Nikki and some poems from Genji Monogatari (“Tale of the Genji”).

In 1881, at the age of 19, Mori became to youngest student ever to graduate from the University of Tokyo. He began a career as an army surgeon, and in 1884, was sent to study in Germany (Leipzig, Dresden, Munich, and Berlin) for four years by the Meiji government. There he studied military hygiene under the physician Robert Koch, and familiarized himself with European philosophy and literature. Upon his return to Japan in 1888, Mori immediately undertook efforts to modernize both Japanese medicine and Japanese literature.

In 1889 he published a collection of translated poetry called Omokage (“Vestiges”). In the same year he married Akamatsu Toshiko, through a matchmaker (Nishi Amane, a doctor from the same province). The couple divorced in 1890, the year that Mori Ōgai published Maihime (舞姫, The Dancing Girl), describing an affair between a Japanese man and a German woman. In 1902, at the age of 41, Mori married Shigei Araki, a judge’s daughter.

He served as an army surgeon in both the Sino-Japanese War (1894) and the Russo-Japanese War (1904-1905). Because of repeated clashes with his superiors over medical policies and their disapproval of his literary activities, Mori was transferred to the remote town of Kokura in Kyushu. He kept a diary and did not publish any novels during that time, but seems to have matured personally and as a writer, and to have gathered material for his later historical fiction. In 1907, five years after he returned to Tokyo from Kokura, Mori was promoted to surgeon general.

As a physician, Mori specialized in beriberi, an ailment caused by a deficiency of thiamine. He wrongly believed that beriberi was an infectious disease and refused to implement the dietary policy which was adopted by the Japanese Navy and which demonstrably cured the ailment for 99 percent of patients. His questionable decisions during the Russo-Japanese War caused the deaths of ten of thousands of Japanese soldiers from beriberi.

During the Russo-Japanese War Mori started keeping a poetic diary. After the war, he began holding tanka writing parties that included several noted poets such as Yosano Akiko, Sanshō Dayū (山椒大夫), and Takasebune (高瀬舟). He also produced translations of the works of Johann Wolfgang von Goethe, Friedrich Schiller, Henrik Ibsen, Hans Christian Andersen, and Gerhart Hauptmann, and instituted modern literary criticism in Japan, based on the aesthetic theories of Karl von Hartmann. Most of his later work is biographical or historical.

Mori's most popular novel, Gan (1911–1913; The Wild Geese), is set in Tokyo in 1881 and was filmed by Shiro Toyoda in 1953 as The Mistress. The 1912 suicides of General Nogi Maresuke and his wife in the wake of the death of the Emperor Meiji came as a great shock to Mori and prompted him to turn to historical materials, resulting in Okitsu Yagoemon no isho (“The Last Testament of Okitsu Yagoemon,” 1912). Another novel in the same vein was Abe Ichizoku (“The Abe Family,” 1913). In 1916 Mori was appointed director of the Imperial Museum.

A house which Mori lived in is preserved in Kokura Kita ward in Kitakyushu, not far from Kokura station. Here he wrote Kokura Nikki (“Kokura Diary”). The house where he was born is also preserved in Tsuwano. The two one-story houses are remarkably similar in size and in their traditional Japanese style. 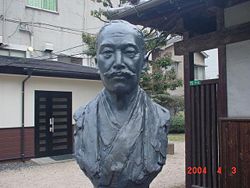 During the four years he spent in Germany, Mori was impressed with the importance of the individual in Western culture, where the originality of those who chose to flaunt tradition and accept the consequences was admired. On his return to Japan, he introduced the genre of autobiographical revelation to Japanese literature and initiated a movement away from the impersonal fiction of the past. His works embodied the conflict between modern Western culture, which was being at least superficially received in Japan, and the deep-rooted traditional values of family loyalty and cultural obligation.

Maihime (“The Dancing Girl”), Mori’s first short story, reveals the dilemma faced by Ota Toyotaro, who meets a young German dancer, Elise, while studying in Germany. The two fall in love, but Ota learns that he must return to Japan to clear his name. He agonizes over his decision to leave the pregnant Elise behind, symbolizing the modern Japanese struggle to reconcile a traditional sense of duty and cultural responsibility with the individuality and self-direction of the West. Mori himself found love in Germany, but he was forced to abandon it because of traditional family loyalty and the careerism of the Imperial bureaucratic system which he found so oppressive. Though he gave up the love he experienced in Germany, he never forgot it. The experience became the motivation which inspired his writing activities; the compromise he faced in actual life was changed to the literary images and was eventually resurrected in the work of Maihime.

Mori struggled in the Imperial bureaucracy. He never openly disobeyed, but showed a willingness to make one compromise after another. Three days before his death Mori expressed his opposition clearly for the first time in a note saying that he wished to reject completely the honors conferred on him by the Imperial Household Agency and the army, and wanted to die only as “a man of Iwami (province), Mori Rintaro.” It seemed as though he recalled with resentment that, in his youth, even his love life had been encroached upon by the power of the Imperial bureaucracy. This resentment against bureaucracy is evident in his last works, historical biographies of three great men of the Edo age.

A one-volume paperback edition of an earlier two-volume collection of stories.

Retrieved from https://www.newworldencyclopedia.org/p/index.php?title=Mori_Ogai&oldid=985503
Categories:
Hidden category:
This page was last edited on 22 November 2014, at 23:50.
Content is available under Creative Commons Attribution/Share-Alike License; additional terms may apply. See Terms of Use for details.