The Medici family was a powerful and influential Florentine family from the thirteenth to seventeenth century closely associated with the Renaissance and cultural and artistic revival during this period. The family produced three popes (Leo X, Clement VII, and Leo XI), numerous rulers of Florence (notably Lorenzo il Magnifico, to whom Machiavelli dedicated The Prince, and later members of the French and English royal families.

From humble beginnings (the origin of the name is uncertain, it allegedly reflects a medical trade—medico) originating from the agriculture based Mugello region, the family first achieved power through banking. The Medici Bank was one of the most prosperous and most respected in Europe. There are some estimates that the Medici family was for a period of time the wealthiest family in Europe. From this base, the family acquired political power initially in Florence, and later in the wider Italy and Europe. A notable contribution to the profession of accounting was the improvement of the general ledger system through the development of the double-entry bookkeeping system for tracking credits and debits. This system was first used by accountants working for the Medici family in Florence.

Giovanni di Bicci de' Medici was the first Medici to enter banking, and while he became influential in Florentine government, it was not until his son Cosimo the Elder took over in 1434 as gran maestro that the Medici became unofficial heads of state of the Florentine republic. The "senior" branch of the family—those descended from Cosimo the Elder—ruled until the assassination of Alessandro de' Medici, first Duke of Florence, in 1537. This century-long rule was only interrupted on two occasions (between 1494-1512 and 1527-1530), when popular revolts sent the Medici into exile. Power then passed to the "junior" branch—those descended from Lorenzo the Elder, younger son of Giovanni di Bicci, starting with his great-great-grandson Cosimo I the Great. The Medici's rise to power was chronicled in detail by Benedetto Dei (1417-1492). The Medici used their money to gain influence and power. As a family, they shared a passion for the arts and a humanist view of life. While some of their members genuinely, especially Cosimo the Elder, wanted to improve life for the people over whom they exercised power, the dynasty's downfall was an increasing tendency towards despotism. 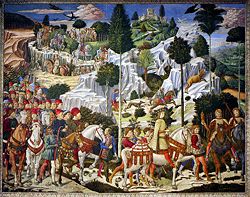 Members of the Medici family parading in the guise of the youngest king from Three Wise Men through the Tuscan countryside in a Benozzo Gozzoli fresco from c. 1459.

The most significant accomplishments of the Medici were in the sponsorship of art and architecture, mainly early and High Renaissance art and architecture. Giovanni di Bicci de' Medici, the first patron of the arts in the family, aided Masaccio and ordered the reconstruction of the Church of San Lorenzo. Cosimo the Elder's notable artistic associates were Donatello and Fra Angelico. The most significant addition to the list over the years was Michelangelo, who produced work for a number of Medici, beginning with Lorenzo the Magnificent. In addition to commissions for art and architecture, the Medici were prolific collectors and today their acquisitions form the core of the Uffizi museum in Florence. For seven years Leonardo da Vinci enjoyed Medici patronage.

In architecture, the Medici are responsible for some notable features of Florence; including the Uffizi Gallery, the Pitti Palace, the Boboli Gardens, the Belvedere, and the Palazzo Medici.

Although none of the Medici themselves were scientists, the family is well known to have been the patrons of the famous Galileo, who tutored multiple generations of Medici children, and was an important figurehead for his patron's quest for power. Galileo's patronage was eventually abandoned by Ferdinando II, when the Inquisition accused Galileo of heresy. However, the Medici family did afford the scientist a safe haven for many years. Galileo named the four largest moons of Jupiter after four Medici children he tutored.

The Medici have been described as "Godfathers of the Renaissance" due to the important role played by their patronage and sponsorship of art and culture (see Strathern, 2003).

What became known as the Popolani line or cadet branch of the family, founded by Cosimo the Elder's brother, Lorenzo, emerged as champions of democracy and of the rights of citizens.

The first Medici pope, Leo X, saw the start of the Protestant Reformation under Martin Luther. Using the sale of indulgences to finance his rebuilding of St Peter's basilica, and living a lavish lifestyle, he was a target of Luther's criticism that the church was too worldly. He patronized artists and poets and held recitals and plays at the papal court, where he also loved to give impromptu speeches. In order to commission works by Raphael he designed projects so that the great artist could enjoy his patronage. His sexual exploits were legendary. He appointed his cousin, Giulio as Archbishop of Florence. Leo excommunicated Luther in 1521. The second Medici pope excommunicated Henry VIII of England, thus giving impetus to the English reformation. The third Medici pope, Leo XI was 70 years of age when he was elected to the papacy, and refused to create one of his own relatives a Cardinal, although he dearly loved him, out of a hatred of nepotism. He was a distant member of the Medici family. These Popes are often described as 'humanistic' because they had little genuine interest in spirituality but believed that the classical literature of Greece and Rome contained all that is needed to live a good life. The Medici popes belong to a period when the papacy still exercised considerable political power and ambitious men could further their personal or family interests by achieving this dignity. Nepotism was so ripe that a Medici could be groomed for the papacy from an early age. It is to Leo XI's credit that he refused to engage in this. The Medici popes added considerably to the artistic beauty of the Vatican but did little if anything to guide the Church spiritually at a time when its clergy were being criticized for being too worldly, and the church was under attack for teaching false doctrines, such as that it could sell salvation. In addition to the Medici popes, other members of the family served as Cardinals.