Medgar Wiley Evers (July 2, 1925 – June 12, 1963) was a black American civil-rights activist, a field secretary of the National Association for the Advancement of Colored People (NAACP). He was one of the first martyrs of the civil rights movement, whose death prompted President John F. Kennedy to ask Congress for a comprehensive civil rights bill, signed by President Johnson in 1964. The bill, known as the Civil Rights Act of 1964, made illegal all discrimination based on race, color, religion, gender, or national origin. Evers' work was living for the sake of others, sacrificing his own life, and it served to bring about significant change for the good of human society.

Medgar Wiley Evers was born on July 2, 1925, near Decatur, Mississippi, as the third of four children of a small farm owner. Already as a child he learned about racial intolerance, being a witness to murder of a black man for talking back to a white woman. Evers walked 12 miles each way to earn his high school diploma.

In 1943, he began service in the U.S. Army during World War II. After the war Evers enrolled at Alcorn State University, majoring in business administration. While at the school, Evers stayed busy by competing on the school's football and track teams, also competing on the debate team, performing in the school choir, and serving as president of the junior class.

Evers married a classmate, Myrlie Beasley, on December 24, 1951, and completed work on his degree the following year. The couple moved to Mound Bayou, Mississippi, where T. R. M. Howard had hired Evers to sell insurance for his Magnolia Mutual Life Insurance Company. Howard was also the president of the Regional Council of Negro Leadership (RCNL), a civil rights and pro self-help organization. Involvement in the RCNL gave Evers crucial training in activism. He helped to organize the RCNL's boycott of service stations that denied blacks use of their restrooms. The boycotters distributed bumper stickers with the slogan "Don't Buy Gas Where You Can't Use the Restroom." Between 1952 and 1954, along with his brother, Charles Evers, he also attended the RCNL's annual conferences in Mound Bayou, which drew crowds of ten thousand or more.

Evers applied to the then-segregated University of Mississippi Law School in February 1954. When his application was rejected, Evers turned to the National Association for the Advancement of Colored People (NAACP) and joined its campaign to desegregate the school, a case aided by the U.S. Supreme Court ruling in the case of Brown v. Board of Education that racial segregation was unconstitutional. In December 1954, Evers became the NAACP's first field officer in Mississippi.

After moving to Jackson, Mississippi, Evers became involved in a boycott campaign against white merchants and was instrumental in eventually desegregating the University of Mississippi. The institution was finally forced to enroll James Meredith in 1962.

In the weeks leading up to his death, Evers found himself the target of a number of threats. His public investigations into the murder of Emmett Till (1941–1955) and his vocal support of Clyde Kennard (1927–1963) left him vulnerable to attack. On May 28, 1963, a "Molotov cocktail" bomb was thrown into the carport of his home, and five days before his death, he was nearly run down by a car after he exited the Jackson NAACP office. Civil rights demonstrations accelerated in Jackson during the first week of June 1963. A local television station granted Evers time for a short speech, his first in Mississippi, where he outlined the goals of the Jackson movement. Following the speech, threats on Evers' life increased. 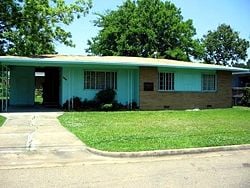 House where Evers was shot.

On June 11, 1963, Evers pulled into his driveway after returning from an integration meeting where he had conferred with NAACP lawyers. Exiting his car, Evers was struck in the back with a bullet that ricocheted into his home. He died at the local hospital 50 minutes later. Evers was murdered just hours after President John F. Kennedy's speech on national television in support of civil rights. He was buried at the Arlington National Cemetery and received full military honors.

On June 23, 1963, Byron De La Beckwith, a fertilizer salesman and member of the White Citizens' Council and Ku Klux Klan, was arrested for Evers' murder. An all-white jury met twice that year to try Beckwith, but were unable to reach a verdict, allowing Beckwith to escape justice. In 1994, 30 years after the two previous trials, Beckwith was again brought to trial based on new evidence concerning statements he made to others. During the trial, the body of Evers was exhumed from his grave for autopsy, and found to be in a surprisingly excellent state of preservation as a result of embalming. Beckwith was convicted on February 5, 1994, after living as a free man for three decades after the murder. Beckwith appealed unsuccessfully, and died in prison in January 2001.

Evers’ work is mainly associated with his engagement in the National Association for the Advancement of Colored People (NAACP). Evers came to the NAACP after working as an insurance salesman, the job through which he witnessed the whole scope of racial discrimination and injustice:

On that very night a Negro had fought with a white man in Union and a white mob had shot the Negro in the leg. The police brought the Negro to the hospital but the mob was outside the hospital, armed with pistols and rifles, yelling for the Negro. I walked out into the middle of it. I just stood there and everything was too much for me.... It seemed that this would never change. It was that way for my Daddy, it was that way for me, and it looked as though it would be that way for my children. I was so mad I just stood there trembling and tears rolled down my cheeks (Mendelsohn 1966).

After that, Evers quit his salesman job and engaged full-time in the local chapter of NAACP. He first became a chapter organizer, but was soon appointed state field secretary. He was one of the most outspoken and distinguished members of the NAACP in the state of Mississippi. Evers spoke at numerous meetings and conferences, preaching the need for overcoming hatred and racial inequality, and promoting understanding and peace. In addition, he started to investigate violent crimes committed against blacks, and his efforts were one of the key factors in admission of James Meredith to the University of Mississippi in 1962.

Through his work, he built a strong network of supporters, including black church ministers and other civil rights activists. However, at the same time, he created many enemies. His wife wrote:

Medgar knew what he was doing, and he knew what the risks were. He just decided that he had to do what he had to do. But I knew at some point in time that he would be taken from me (Myrlie Evers 1988).

The threats on his life became frequent, from anonymous telephone calls to Molotov cocktails being thrown at his house. However, despite everything, Evers continued his work. He went out to register African American voters and lobby for a biracial committee to address social issues in Jackson. He organized numerous marches, economic boycotts, and prayer vigils, and would help bail out demonstrators that were arrested by the police.

In an interview for the radio, a few weeks before his death, he said:

The NAACP believes that Jackson can change if it wills to do so.… We believe that there are white Mississippians who want to go forward on the race question. Their religion tells them there is something wrong with the old system. Their sense of justice and fair play sends them the same message. But whether Jackson and the State choose to change or not, the years of change are upon us. In the racial picture, things will never be as they once were (Mendelsohn 1966).

Evers was one of the first martyrs of the civil rights movement. After his death, President John F. Kennedy asked Congress to bring a comprehensive civil rights bill, which was signed in 1964 by President Lyndon B. Johnson. The act outlawed discrimination based on race, color, religion, gender, or national origin. At the same time, Evers’ death prompted other social activists to engage in work on racial integration, putting pressure on public institutions—schools, universities, restaurants, and other places—to finally ban racial segregation.

Evers's wife, Myrlie Evers-Williams, became a noted activist in her own right later in life, eventually serving as chairwoman of the NAACP. Evers’ brother Charles returned to Jackson in July 1963 and served in his slain brother's place. Charles Evers remained involved in Mississippi civil rights for years to come.

Evers' legacy has been kept alive in a variety of ways. In 1970, Medgar Evers College was established in Brooklyn, New York as part of the City University of New York, and in 1992 he was immortalized in Jackson, Mississippi, with a statue.

Musician Bob Dylan wrote the song "Only a Pawn in Their Game" about Evers and his assassin, and Phil Ochs wrote the songs "Too Many Martyrs" and "Another Country" in response to Evers’ killing. Matthew Jones and the Student Nonviolent Coordinating Committee Freedom Singers paid tribute to Evers in the haunting "Ballad of Medgar Evers." Rapper Immortal Technique asks if a diamond is "worth the blood of Malcolm and Medgar Evers?" in the song "Crossing the Boundary." In 1983, a television movie, For Us the Living: The Medgar Evers Story, was aired, celebrating the life and career of Medgar Evers. The 1996 film Ghosts of Mississippi tells the story of the 1994 trial, in which a district attorney's office prosecutor, Robert Delaughter, successfully retried the case, and won.

Retrieved from https://www.newworldencyclopedia.org/p/index.php?title=Medgar_Evers&oldid=1086409
Categories:
Hidden category:
This page was last edited on 9 November 2022, at 03:55.
Content is available under Creative Commons Attribution/Share-Alike License; additional terms may apply. See Terms of Use for details.