The Civil Rights Act of 1964, Pub. L. No. 88-352, 78 Stat. 241 (July 2, 1964) was a legislatively and morally courageous, landmark effort within the United States, that advanced the ideal of political and social equality by validating both the right to nondiscrimination in locales of public accommodation and the right to equal employment opportunity. It outlawed discrimination based on race, color, religion, sex, or national origin. Originally conceived as a mechanism to protect the rights of American blacks, the bill, prior to its passage, was amended to protect the civil rights of all citizens, and, for the first time, to explicitly include women. 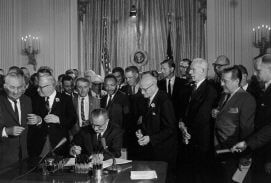 President Johnson signs the Civil Rights Act of 1964. Among the guests behind him is Martin Luther King, Jr.

In its search for a way to realize the dream of social and economic equality for all, America has authored a story full of pain, tears, sweat, and blood. Against the historical backdrop of the numerous factors that constituted the bedrock of American racial segregation, the U.S. Congress had previously passed the Civil Rights Acts of 1866, of 1875, of 1957, and of 1960. This history had been a literal tug of war between the Congress and the Supreme Court—a battle between lawmaking and law interpreting. Though these bills were all passed into law, they were, in stark reality, worth little more than the paper upon which they were written, and measurable, discernable progress was not to be seen following their enactments.

Political scientists agree, however, that the 1964 Act stands as the most comprehensive legislative measure ever to attempt to eliminate racial discrimination in America. Enacted only after the lengthiest debate in Senate history, and only after the first successful use of cloture to conclude a civil rights filibuster, the Bill transformed American society by legally outlawing discrimination in employment and in public accommodations. Prior to its passage, the Bill was amended so that its Title VII provision included a prohibition against employment discrimination based on gender. For American women in the workforce, this would make real the promise of equal pay for equal work.

Important to remember is the fact that the passage of the 1964 Civil Rights Act was hastened by the shift in public opinion—a shift that came about as millions of Americans were appalled and angered by the television scenes of police dogs and high-powered fire hoses being used against the black protest marchers in Alabama, during the early 1960s. The actual footage of these ugly confrontations served the purpose of piercing America's conscience and of turning public sentiment against the idea that Jim Crow laws ought to be respected and maintained, thus leading to the abolishment of that evil and unjust system.

The Civil Rights Act of 1964 was thus one more legislative plank added to the platform of America's quest to wipe away racial discrimination from every arena of national life. Yet, the perceived necessity for the Act was another attestation to the oceanic gulf between the nation's lofty, spiritual creeds and its sociopolitical deeds. Although enforcement powers regarding the Act were initially weak, they strengthened over the ensuing years, thereby making possible subsequent programs such as Affirmative Action.

The bill that became the Civil Rights Act of 1964 was promised by President John F. Kennedy in his civil rights speech of June 11, 1963,[1] in which he requested legislation that would provide "the kind of equality of treatment which we would want for ourselves." Among the bill's facets were provisions to ban discrimination in public accommodations, and to enable the U.S. Attorney General to sue state governments that operated racially segregated school systems. Kennedy then sent the bill, on June 19, to Congress, where, in the House of Representatives, it was referred to the House Judiciary Committee, chaired by the liberal, Brooklyn, New York Democrat, Emmanuel Celler. Following a series of hearings on the bill, Celler's committee greatly strengthened the legislation, adding to it provisions to ban racial discrimination in employment. The bill was reported out of the Judiciary Committee in November 1963, but was then referred to the House Rules Committee, chaired by the segregationist Virginia Democrat, Howard W. Smith, who declared his intention of using all the dilatory tactics at his disposal to keep the bill bottled up indefinitely. After finally leaving the House, the bill was introduced in the Senate by Senate Majority Leader Mike Mansfield. Kennedy was unable to advance the bill, and at the time of his murder, on November 22, 1963, the bill had not yet been passed by Congress. But after Kennedy's death, President Lyndon B. Johnson decided to use both his executive influence in Congress and the sentimental reaction to Kennedy's assassination to get the bill passed. Despite an 83-day filibuster, led by Senate "Dixiecrats" and segregationists, both Republicans and Democrats voted overwhelmingly in favor of the Act, and President Johnson signed the bill into law on July 2, 1964.

Totals are in "Yea-Nay" format:

The Senate Version, voted on by the House:

By Party and Region

Did you know?
The Civil Rights Act of 1964 was amended prior to passage to explicitly include women's rights

Howard W. Smith, the powerful Virginian who chaired the House Rules Committee, opposed civil rights laws for blacks, but he supported them for women. Smith had long been close to Alice Paul, one of the leaders of the Suffrage Movement since 1917. At her urging, Smith jokingly and insincerely included gender as a protected category. His purpose was to make the bill unacceptable, and this attempt to openly ridicule the legislation infused the debate with howls of laughter. Smith's strategy, however, backfired, and was ultimately used against him by Representative Martha Griffiths, a liberal feminist from Michigan, whose support of Smith's amendment resulted in the inclusion of gender as a protected category in the Civil Rights Act of 1964. This development defeated the liberals of the AFL-CIO who had long opposed the Equal Rights Amendment, as well as the black leaders who wanted the bill to focus solely on race.

Smith asserted that he was not joking; he sincerely supported the amendment and, along with Representative Martha Griffiths, he was the chief spokesperson for the amendment.[2]

William Rehnquist, Chief Justice of the U.S. Supreme Court, articulated in Meritor Savings Bank v. Vinson: “The prohibition against discrimination based on sex was added to Title VII at the last minute on the floor of the House of Representatives…the bill quickly passed as amended, and we are left with little legislative history to guide us in interpreting the Act’s prohibition against discrimination based on ‘sex.’”

The bill incited division across the political spectrum and it galvanized long-term shifts in the demographic paradigms of both political parties. President Johnson realized that supporting this bill would mean losing the South's overwhelming support of the Democratic Party. Legend has it that he remarked after signing the Act, "We have lost the South for a generation." Although majorities in both parties voted for the bill, there were notable exceptions. Republican Senator Barry Goldwater of Arizona voted against the bill, remarking, "You cannot legislate morality." Most Democrats from the Southern states opposed the bill, including Tennessee Senator Albert Gore, Sr., Arkansas Senator J. William Fulbright, and West Virginia Senator Robert Byrd. Goldwater went on to secure his party's nomination for the presidency, and in the ensuing U.S. presidential election of 1964, Goldwater won only his home state of Arizona and five of the Deep South states, four of which had not voted Republican since the disputed presidential election of 1876. Johnson's signing of the Act marked the end of the Solid South and the beginning of the Republican Party's ascendance in that region.

Major Features of the Civil Rights Act of 1964

Barred unequal application of voter registration requirements, but did not abolish literacy tests, which were sometimes used to disqualify both American blacks and poor white voters.

"It shall be the duty of the judge designated pursuant to this section to assign the case for hearing at the earliest practicable date and to cause the case to be in every way expedited."

Title VI of the Act prevents discrimination by government agencies that receive federal funding. If an agency is found in violation of Title VI, that agency can lose its federal funding.

Title VII of the Act, codified as Subchapter VI of Chapter 21 of Title 42 of the United States Code, et seq., outlaws discrimination in employment in any business on the basis of race, color, religion, sex or national origin. Title VII also prohibits retaliation against employees who oppose such unlawful discrimination. The Equal Employment Opportunity Commission (EEOC) enforces Title VII. The EEOC investigates, mediates, and sometimes files lawsuits on behalf of employees. Title VII also provides that an individual can bring a private lawsuit. An individual must file a complaint of discrimination with the EEOC within 180 days of learning of the discrimination or the individual may lose the right to file a lawsuit. Title VII only applies to employers who employ 15 or more employees for more than 19 weeks in the current or preceding calendar year.

Title VII does not apply to three types of employers: