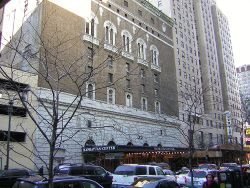 The Manhattan Center building, built in 1906 and located in the heart of Midtown Manhattan, houses Manhattan Center Studios (home to two recording studios), its Grand Ballroom, and the Hammerstein Ballroom, one of New York City's most renowned performance venues.

In 1976, the Holy Spirit Association for the Unification of World Christianity, purchased the Manhattan Center with the intent of utilizing the facility to give birth to a new cultural movement that could create a moral revolution in the arts and in so doing create the conditions whereby art could manifest its true purpose.

Did you know?
The Manhattan Center was originally built by Oscar Hammerstein I as an alternative venue to the Metropolitan Opera House

Located near Madison Square Garden on West 34th Street, in the heart of midtown New York City, the landmark Manhattan Center building still stands 100 years after it was first built as the Manhattan Opera House by Oscar Hammerstein in 1906. With the bold intention to take on the established Metropolitan Opera by featuring cheaper seats for the ordinary New Yorker, the Manhattan Opera Company provided an alternative venue for many great operas and celebrated singers to make their debut. Several important operas received their United States premieres at the Manhattan Opera House, including those by Richard Strauss.

After four years, the Met could no longer withstand the competition and offered Hammerstein $1.2 million to stop producing opera for a period of ten years. He accepted the offer and began experimenting with different acts before eventually selling the building. In March of 1911, the Shubert Brothers opened the hall as a "combination" house featuring vaudeville shows during the week and concerts on Sunday nights. Once again, the Manhattan Opera House provided entertainment for New Yorkers at prices that were much more affordable.

In the following years, ownership changed a few times and in 1922 the Manhattan Opera House was finally purchased by the Ancient Accepted Scottish Rite of Free Masonry. The Masons built the Grand Ballroom on the seventh floor as well as a new building facade. In the year 1926, Warner Brothers premiered Don Juan, billing it as the very first commercially released film featuring a recorded musical soundtrack. The Manhattan Opera House was the venue chosen by Sam Warner to set up the Vitaphone sound-on-disc system used to capture the 107-piece New York Philharmonic orchestra. Today, more than 75 years later, Manhattan Center continues to be New York’s premier scoring stage due to its superior acoustics.

The name of the building was changed to Manhattan Center in 1940, helping to attract many other types of events. The Manhattan Center became a hot spot for “big band” dances as well as trade shows, union meetings and other social functions. Among the diverse events held at Manhattan Center throughout the decades that followed were radio broadcasts, recordings, and performances by the likes of Paul Robeson (1941), Harry Belafonte (1952), Perry Como (1959), Leonard Bernstein (1960), the Grateful Dead (1971), and Bob Marley (1975).

In 1976, the building was purchased by its current owner, the Unification Church. The church used the Grand Ballroom for various religious and cultural events, but also rented it out for other public uses, including music recording. For a number of years the Manhattan Center was run by Reverend Sun Myung Moon's son Hyo Jin Moon.

Manhattan Center Studios was formed in 1986 to develop the Manhattan Center into a venue capable of hosting multimedia events. MCS expanded the audio recording facilities when Studio 4 was opened in 1993. Studio 7 was rebuilt in 1996 to become a state-of-the-art control room capable of servicing all types of recordings and live events in the Ballrooms. 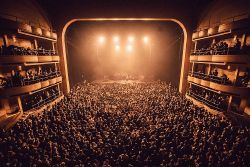 In the early twenty-first century the Manhattan Center, combining old world elegance with state-of-the-art production capabilities, functions as a unique venue for events and recordings in New York City. Clients have included top business professionals and the best of the entertainment and cultural world.

Beginning in 1997, the Hammerstein Ballroom underwent a major face-lift to accommodate the demands of a premier event venue in midtown Manhattan. The beautifully renovated decor, superb acoustics, and high level technical services are only a few of the attributes that have contributed to making the Manhattan Center a highly sought after venue.

Studio 1 and Studio 6 were temporarily closed throughout the Spring and Summer of 2003 to complete extensive upgrades as the company entered into a three year contract with Atlantic Video, a Washington DC based television services and production company.

In 2009, Reverend In Jin Moon, daughter of Reverend Sun Myung Moon, took over management of the Manhattan Center. In addition to further developing its recording and event offerings, for three years she conducted the "Lovin' Life Ministry" on Sunday mornings in the Manhattan Center and broadcast the service throughout the United States.

The New York City Symphony rehearsing at the Manhattan Center.

In the period from 1950 through the late 1990s the Grand Ballroom of the Manhattan Center was the preferred recording venue for many of classical music's most notable recording companies including Deutsche Grammophon (DG), RCA/BMG, CBS/SONY, Nonesuch, New World Records, Koch Classics, Teldec, and EMI. The Metropolitan Opera has recorded several operas in the Grand Ballroom including its award-winning recordings of Richard Wagner's Ring Cycle (for DG) and Giuseppe Verdi's Aida (for SONY) under the direction of James Levine. In 1964 the Philadelphia Orchestra and Westminster Choir recorded Verdi's Requiem Mass under the direction of Eugene Ormandy for Columbia/CBS Records and in 1975 Leonard Bernstein recorded Georges Bizet's Carmen with the Metropolitan Opera for DG.

The Manhattan Center also played host to the annual Carnegie Hall/Robert Shaw Choral Workshop that was established under the direction of Maestro Shaw.

Retrieved from https://www.newworldencyclopedia.org/p/index.php?title=Manhattan_Center&oldid=1085789
Categories:
This page was last edited on 5 November 2022, at 06:48.
Content is available under Creative Commons Attribution/Share-Alike License; additional terms may apply. See Terms of Use for details.