Robert Nesta Marley, (February 6, 1945 – May 11, 1981) was a Jamaican singer, songwriter, and guitarist. He is the most widely known performer of reggae music, and is famous for popularizing the genre outside Jamaica. A faithful Rastafari, Marley is regarded by many as a prophet of the religion.

Marley is best known for his ska, rocksteady, and reggae songs, which include the hits "I Shot the Sheriff," "No Woman, No Cry," "Three Little Birds," "Exodus," "Could You Be Loved," "Jamming," and "Redemption Song." Many of his songs protested social injustice while others emphasized religious, specifically Rastafarian, ideals of peace. "One Love," an anthem of universal brotherhood and perhaps his most beloved composition, has begun to appear in hymnals alongside traditional worship music in Jamaica. His posthumous compilation album, Legend (1984), is the best-selling reggae album ever, with sales of more than 12 million copies.

Marley achieved music superstar status internationally. Yet his ritual marijuana use and self-indulgent rock star lifestyle (he fathered eleven children by seven different women) limited serious acceptance of Marley as a religious voice beyond his homeland. His celebrity and influence led to an assassination attempt on December 3, 1976, forcing him to leave Jamaica for over a year. In 1980, while on tour in America, Marley collapsed while jogging in New York City's Central Park. Previously diagnosed cancer had spread to his brain, lungs, and liver. He died May 11, 1981, at age 36, in Miami.

Marley (born Robert Nesta Marley) was born in the small village of Nine Miles in the Saint Ann Parish, Jamaica. His father, Norval Sinclair Marley, was a white Jamaican born to British parents from Sussex. Norval claimed to be a Marine officer but was a plantation overseer when he married Cedella Booker, an 18-year-old black Jamaican, who became Bob Marley's mother. Norval provided financial support for his wife and child, but seldom saw them, as he was often away on trips. Norval died when Bob Marley was still a child.

Marley suffered racial prejudice as a youth, because of his mixed racial origins and faced questions about his own racial identity throughout his life. He once reflected:

Marley and his mother moved to Kingston's Trenchtown slum after Norval's death. Bob was forced to learn self-defense, as he became the target of bullying because of his racial background and small stature (he was 5'4" tall). He gained a reputation for his physical strength, which earned him the nickname "Tuff Gong."

Marley became friends with Neville "Bunny" Livingston (later known as Bunny Wailer), with whom he started to play music. Bob left school at the age of 14 and started as an apprentice at a local welder's shop. In his free time, he and Livingston made music with Joe Higgs, a local singer and devout Rastafari who is regarded by many as Marley's mentor. It was at a jam session with Higgs and Livingston that Marley met Peter McIntosh (later known as Peter Tosh), who had similar musical ambitions.

In 1962, Marley recorded his first two singles, "Judge Not" and "One Cup of Coffee," with local music producer Leslie Kong. These songs, released on the Beverley's label under the pseudonym of Bobby Martell, attracted little attention. The songs were later re-released on the album Songs of Freedom, a posthumous collection of Marley's songs.

Marley took on the role of leader, singer, and main songwriter. Much of The Wailers' early work, including their first single, "Simmer Down," was produced by Coxsone Dodd at Studio One. "Simmer Down" topped the Jamaican charts in 1964 and established The Wailers as one of the hottest groups in the country. They followed up with songs such as "Soul Rebel" and "400 Years."

In 1966, Marley married Rita Anderson and moved near his mother's residence in Wilmington, Delaware for a few months. Upon returning to Jamaica, he became a member of the Rastafari movement, and started to wear his trademark dreadlocks.

After a conflict with Dodd, Marley and his band teamed up with Lee "Scratch" Perry and his studio band, The Upsetters. Although the alliance lasted less than a year, they recorded what many consider The Wailers' finest music. Marley and Perry split after a dispute regarding the assignment of recording rights, but they would remain friends and work together again.

Between 1968 and 1972, Bob and Rita Marley, Peter McIntosh, and Bunny Livingston re-cut some old tracks with JAD Records in Kingston and London, in an attempt to commercialize The Wailers' sound. Livingston later asserted that these songs "should never be released on an album … they were just demos for record companies to listen to."

The Wailers' first album, Catch A Fire, was released worldwide in 1973, and sold well. It was followed a year later by Burnin, which included the songs "Get Up, Stand Up" and "I Shot The Sheriff." Eric Clapton made a hit cover of "I Shot the Sheriff" in 1974, raising Marley's international profile.

The Wailers broke up in 1974, with each of the three main members going on to pursue solo careers. The reason for the breakup is the subject of much conjecture. Some believe that there were disagreements amongst Livingston, McIntosh, and Marley concerning performances, while others claim that Livingston and McIntosh simply preferred solo work. McIntosh began recording under the name Peter Tosh, and Livingston continued on as Bunny Wailer.

In 1975, Marley had an international breakthrough with his first hit outside Jamaica, "No Woman, No Cry" from the Natty Dread album. This was followed by his first hit album in the United States, Rastaman Vibration (1976), which spent four weeks on the Billboard Top Ten.

In December 1976, two days before "Smile Jamaica," a free concert organized by Jamaican Prime Minister Michael Manley in an attempt to ease tension between two warring political groups, Marley, his wife, and manager Don Taylor were wounded in an assault by unknown gunmen inside Marley's home. Taylor and Marley's wife sustained serious injuries but later made full recoveries. Bob Marley received only minor injuries in the chest and arm. The shooting was thought to have been politically motivated, as many felt the concert was really a support rally for Manley. Nonetheless, the concert proceeded, and an injured Marley performed as scheduled.

Marley left Jamaica at the end of 1976 for England, where he recorded his Exodus and Kaya albums. Exodus stayed on the British album charts for 56 consecutive weeks. It included four UK hit singles: "Exodus," "Waiting In Vain," "Jamming," and also "One Love," a reworking of Curtis Mayfield's hit, "People Get Ready." It was here that he was arrested and received a conviction for possession of a small quantity of marijuana.

In 1978, Marley performed at another political concert in Jamaica, the One Love Peace Concert, again in an effort to calm warring parties. Near the end of the performance, by Marley's request, Manley and his political rival, Edward Seaga, joined each other on stage and shook hands. 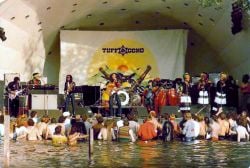 Bob Marley & the Wailers live at Crystal Palace Park in south-east London, during the Uprising Tour

Survival, a defiant and politically charged album, was released in 1979. Tracks such as "Zimbabwe," "Africa Unite," "Wake Up and Live," and "Survival" reflected Marley's support for the struggles of Africans. In early 1980, he was invited to perform at the April 17 celebration of Zimbabwe's Independence Day.

Uprising (1980) was Bob Marley's final studio album, and is one of his most religious productions, including "Redemption Song" and "Forever Loving Jah." Confrontation, released posthumously in 1983, contained previously unreleased material, including the hit "Buffalo Soldier" and new mixes of singles previously only available in Jamaica.

Bob Marley was a member of the Rastafari movement, whose culture was a key element in the development of reggae. Bob Marley became the leading proponent of the Rastafari, taking their music out of the socially deprived areas of Jamaica and onto the international music scene.

Now considered a "Rasta" legend, Marley's adoption of the characteristic Rastafari dreadlocks and famous use of cannabis as a sacred sacrament in the late 1960s were an integral part of his persona. He is said to have entered every performance proclaiming the divinity of Jah Rastafari. Many of Marley's songs contained Biblical references.

A few months before his death, Marley was baptized into the Ethiopian Zion Coptic Church and took the name Berhane Selassie, meaning "the Light of the Holy Trinity" in Amharic.

In July 1977, Marley was found to have malignant melanoma in a football (soccer) wound on his right big toe. Marley refused amputation, citing worries that the operation would affect his dancing, as well as the Rastafari belief that the body must be "whole." Marley went against all surgical possibilities and sought out other means that would not break his religious beliefs. He also refused to register a will, based on the Rastafari belief that writing of one's death disregarded the everlasting character of life.

The cancer then spread to Marley's brain, lungs, liver, and stomach. After playing two shows at New York's Madison Square Garden as part of his fall 1980 Uprising Tour, he collapsed while jogging in Central Park. The remainder of the tour was subsequently canceled.

Bob Marley played his final concert at the Stanley Theater in Pittsburgh, Pennsylvania on September 23, 1980. The live version of "Redemption Song" on Songs of Freedom was recorded at this show. Marley afterwards sought medical help from Munich specialist Josef Issels, but his cancer had already progressed to the terminal stage. 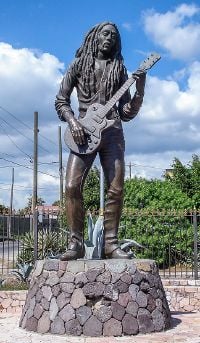 While flying home from Germany to Jamaica for his final days, Marley became ill, and landed in Miami for immediate medical attention. He died at Cedars of Lebanon Hospital in Miami, Florida on the morning of May 11, 1981 at the age of 36. His final words to his son Ziggy were "Money can't buy life."

Marley received a state funeral in Jamaica. He was buried in a crypt near his birthplace with his Gibson "Les Paul" model guitar, a soccer ball, a marijuana bud, a ring that had been given to him by the Prince Asfa Wossen of Ethiopia, and a Bible. A month before his death, he was awarded the Jamaican Order of Merit. 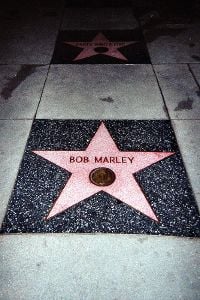 Bob Marley's star on the Hollywood Walk of Fame.

Decades after his death, Marley remains the main symbol of reggae's worldwide popularity. His music has continuously grown in popularity, providing a stream of revenue for his estate and affording him a mythical status in twentieth century music history. He remains enormously popular and well-known all over the world, particularly so in Africa.

Marley was inducted into the Rock and Roll Hall of Fame in 1994. TIME magazine chose the Exodus album as the greatest album of the twentieth century.

Marley's wife Rita and son David, better known as Ziggy, have successfully carried on the Marley musical tradition. Ziggy went on to score considerable pop success as the leader of the Melody Makers, a Marley family group composed of siblings Cedella, Stephen, and Sharon. Their 1988 single "Tomorrow People" was a Top 40 U.S. hit, a feat even Bob Marley himself never accomplished. Three other Marley children—Damian, Julian, and Ky-Mani—pursued careers in music as well.

In all, Bob Marley had 13 children: Three with his wife Rita, two adopted from Rita's previous relationships, and the remaining eight with separate women.

In 2001, the same year that Marley was posthumously awarded the Grammy Lifetime Achievement Award, a feature-length documentary about his life, Rebel Music, was nominated for Best Long Form Music Video documentary at the Grammys. It won various other awards.