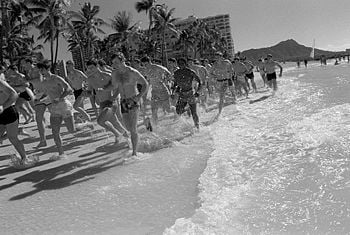 Jogging is a form of trotting or running which is conducted at a slow or leisurely pace. The main purpose in jogging is to increase fitness levels in a way that incurs less stress than running which places greater pressure on the joints and knees.

Running may be considered more of a competitive sport, while jogging, done at one's own pace, can either be a hobby or a means towards improved health. People jog for fitness, fun, or training, and since jogging is low-cost, does not require special equipment, or a gym membership it can be an economical—as well as healthful—pastime.

With walking one foot is always on the ground but in running both feet leave the ground as the person is nearly airborne and propelling themselves forward. Jogging is slow running as opposed to sprinting or merely walking.

Dr. George Sheehan, cardiologist and author of the best seller, Running & Being: The Total Experience, stated that, "the difference between a jogger and a runner is an entry blank." In other words, joggers have no organized racing event to "enter," as the majority of sports organizations have not recognized jogging as a competitive sport and many joggers run simply for the pleasure of it or as part of a daily or weekly health regime.[1]

While there is no universally agreed upon definition that distinguishes running from jogging, some running experts would specify that jogging is running at a pace of six mph or slower.[2]

Jogging is often used by serious runners as a means of active recovery during interval training. The runner who may have just completed a fast 400 meter repetition at a sub-5-minute mile pace, may drop to an 8-minute mile pace for a recovery lap. 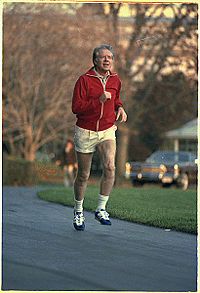 President Jimmy Carter jogging:It was Carter who reflected, "Everyone who has run knows that its most important value is in removing tension and allowing a release from whatever other cares the day may bring.[3]
Did you know?
Jogging is considered a means towards improved health and fitness

The origin of the word "jog" and its first usage can be traced to Literature. In Shakespeare's play, The Taming of the Shrew, (1590) Katherina says, "The door is open, sir, there lies your way, you may be jogging whiles your boots are green." Australian novelist Rolf Boldrewood in his novel, My Run Home (1884) writes, "…your bedroom curtains were still drawn as I passed on my morning jog." However, the word did not come into common usage in the English language until the latter part of the twentieth century when physical fitness fads mushroomed. Today, while some people use the term jogging interchangeably with running, others insist on a distinction between the two terms.

Initially, in the United States jogging was called "roadwork," when athletes in training customarily ran several miles each day as part of their conditioning. The renowned but controversial New Zealand coach Arthur Lydiard is credited with popularizing jogging in the early 1960s through his successful training methods.

The idea of jogging as an organized activity appeared in a sports page article in the New Zealand Herald in February 1962, which told of a group of former athletes and fitness enthusiasts who would meet once a week to run for "fitness and sociability." Since they would be jogging, the newspaper suggested that the club "may be called the Auckland Joggers Club"—which is thought to be the first use of the noun "jogger." The newly coined term caught the attention of a public whose surge in interest in consumer health was rising during the 1960s and 1970s.

University of Oregon track coach Bill Bowerman, after jogging with Coach Lydiard in New Zealand, brought the concept of jogging as exercise to the United States in 1962. Bowerman published the book, Jogging, in 1966, and later updated the book for a 1967 republication. Bowerman's program established in Eugene, Oregon became a national model for fitness programs. The popularity of these programs helped to spread the concept of jogging as an exercise for everyone.[4]

Getting started and following a program

The best place to begin a running program of any type is to start by walking. "Continuous walking will slowly prepare your legs for running and will also help you develop a consistent daily routine," says Bud Coates, a four-time Olympic Marathon Trials Qualifier.[5] After an initial period of walking for one week, four days of 20 minutes then three days of 30 minutes, introduce two minutes of running, alternating with four minutes of walking. "Many beginning runners make the mistake of starting out too fast. They get completely out of breath, their leg muscles scream and …running isn't fun under those circumstances. So they get discouraged and quit. Instead, they need to begin at a pace that is about the same as a fast walk." Coates' recommendations are the same for many beginner running programs.[5]

Places to jog are important because the impact of the feet on a hard surface can cause problems. Soft roadways, paved tracks, or even a treadmill are all acceptable places to run; however, avoid steep roads which can throw your footing off and lead to sore muscles and injury. Sidewalks are not preferable as concrete's hardness can contribute to shin splints.

To prevent problems with pronation—either over or under—know your foot type. Pronation—the way your foot hits the ground—has a lot to do with arch height. "The arch determines how your feet and legs will function when you run," explains Joe Ellis, D.P.M., podiatrist and author of Running Injury-Free.[5]

A good running shoe will last for 400 to 500 miles so it pays to get the right ones, and to be outfitted by a store that sells various brands suited to the different foot types.

For beginners, jog no more than four days per week with a day of rest between workouts to allow for adequate recovery of the weight-bearing joints, ligaments, and tendons. Each exercise session should last no more than 20-30 minutes for the first 4-6 weeks. The initial goal should be to increase time or duration, not the intensity or speed of the jog.

Anyone undertaking a sustained vigorous exercise regime such as running or jogging should have a complete medical exam—including an EKG—to eliminate the possibility of any negative effects to their health. Certain conditions, such as heart disease, advanced arthritis, diabetes, orthopedic problems, and conditions of the kidney or liver preclude embarking on a jogging program.

Common sense would dictate that joggers, especially when running on roadways, wear the proper clothing and running shoes, carry identification and avoid remote areas. Light stretches to warm up and to cool down are advisable and can prevent common runner's injuries. Injury can be also minimized by warming up beforehand, improving running form, performing strength training exercises, eating a well balanced diet, getting enough rest, and "icing" (applying ice to sore muscles, or taking an ice bath).

Jogging is a "high-impact" exercise that places strain on the body, notably the joints of the knee. As a result, some people choose to take up "lower-impact" exercises such as stair climbing, swimming, cycling, or walking instead of jogging.

Studies have shown that women can safely run while pregnant and the (ACOG) American College of Obstetricians and Gynecologists states that as long as a woman does not show risk factors for a problematic pregnancy she can continue her exercise program throughout her pregnancy. Women may want to run at a lower intensity as pregnancy itself makes high demands on the cardiovascual, respiratory, and thermoregulatory systems.[6]

Jogging has been proven to reduces risk of cardiovascular disease, to lower the heart rate, and blood pressure to reduce the risk of stroke—the second leading cause of death for women. Vigorous exercise such as jogging can also reduces the risk of breast cancer for women.[6] Like other types of aerobic exercise, jogging is an excellent means of improving cardiovascular health, bone density, and physical fitness.

Jogging fits into the concept of "positive addiction" as defined by psychiatrist William Glasser as a repetitive activity without self-criticism or judgment that has a beneficial effect on one's mind and body. Activity such as jogging stimulates the neurotransmitters in the brain, increases blood and oxygen flow to the brain, and therefore, it is generally regarded that exercise can enhance mental and creative powers, improve mood and even sleep.[6]

Jogging is one of the quickest and most efficient forms of undertaking weight loss. The President's Council on Physical Fitness and Sports recommends jogging as a vigorous activity that can help with weight control through the expenditure of calories.[7]

Exactly how many calories will be expended by jogging depends on a number of factors. The heavier a person is and the faster a person runs, means the more calories burned. One estimate suggests that jogging for weight loss will burn roughly ten calories per minute. This means that a person jogging for 30 minutes six times a week will burn approximately 1800 calories in a week. The important thing to remember with weight loss is that no matter how much or what type of exercise is undertaken, one needs to reduce calories and increase activity to the point that more calories are being burned than consumed.

Retrieved from https://www.newworldencyclopedia.org/p/index.php?title=Jogging&oldid=1074909
Categories:
Hidden category:
This page was last edited on 1 August 2022, at 13:48.
Content is available under Creative Commons Attribution/Share-Alike License; additional terms may apply. See Terms of Use for details.