Robert James Keeshan (June 27, 1927 – January 23, 2004) was an American television producer and actor. His first TV appearance was in 1948, when he played the voiceless, horn-honking Clarabell the Clown, a role he created and played for five years on the Howdy Doody Show.

He achieved his greatest fame as the title character of the children's television program Captain Kangaroo, and became an icon for millions of baby boomers during its 30-year run on the Columbia Broadcasting System (CBS) from 1955 through 1984. The show won five Emmy Awards, three Gabriel Awards and three Peabody Awards.

As his career developed Keeshan became an advocate, book author, lecturer, and lobbyist on behalf of childrens' issues. He was critical of modern TV programming, citing violence, and content. Whenever he lectured his topics included the importance of good parenting. In 1980, he was named TV Father of the Year.

Keeshan was born in Long Island, but his family moved to Forest Hills, New York shortly after his birth. His immigrant father owned a grocery store and he had a younger sister and two older brothers. His mother died when Bob was only 15.

At 18, he began working for NBC in their page program. A page was a low-level gopher, giving an individual an "in" at NBC, and giving them time to find where, if anywhere, they belonged at NBC. Before he could discover this for himself, World War II interrupted. Shortly before his 18th birthday, he joined the U.S. Marines, and underwent basic training. After the war ended he returned to NBC to finish his time as a page, working for Bob Smith during the day, and attending college at night intending to become a lawyer. He received his bachelor's degree in education from Fordham University in 1951.[1]

Keeshan met and married his wife, Jean Laurie, in 1950. They were married for forty years, until her death in 1990. They had two daughters, Laurie and Mave, and a son named Michael; they had six grandchildren.

Bob Keeshan's grandson, Britton Keeshan, became the youngest person at the time to climb the Seven Summits when he summited Mount Everest in May 2004. He did so carrying photos of his grandfather, and buried a photo of the two of them at the summit of Everest.[2]

Keeshan lived on Melbury Road in Babylon Village, Long Island, New York before moving to spend the last 14 years of his life in Vermont, where he became a children's advocate as well as an author. His memoirs, entitled Good Morning, Captain, were published in 1995.[3]

Keeshan died in Windsor, Vermont, on January 23, 2004, at 76 years old of natural causes. He was buried in Saint Joseph's Cemetery in Babylon, New York.

After World War II network television programs for children were becoming popular. In 1948, when Howdy Doody premiered on NBC,[4] Keeshan played "Clarabell the Clown," a silent Auguste clown who mainly communicated by honking horns attached to a belt around his waist (one of the horns meant "yes;" the other horn meant "no"). Clarabell often spritzed Buffalo Bob Smith with a seltzer bottle and played practical jokes. He gave up the role in 1952, and was replaced by another actor.

In August 1953 Keeshan was back on the air on WABC-TV (New York City), doing a new children’s show, Time for Fun, playing the role of Corny the Clown, a clown who spoke.[5] Later that same year, in addition to Time for Fun, he began Tinker's Workshop, a program aimed at preschoolers, where the 26 year old played the grandfatherly Tinker. 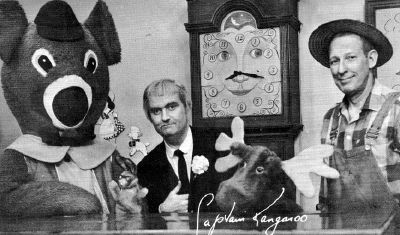 Developing the ideas from Tinker's Workshop, Keeshan and long-time friend Jack Miller submitted the concept of Captain Kangaroo to the CBS network, which was searching for innovative new approaches to children's television programming. CBS approved the new show, and Keeshan starred as the title character of Captain Kangaroo when it premiered on CBS on October 3, 1955. Keeshan described his character as based on "the warm relationship between grandparents and children." Frequently recurring characters included Mr. Green Jeans (played by Hugh "Lumpy" Brannum), and puppets such as "Bunny Rabbit" and "Mr. Moose." The show was a great success, and he served as host for almost three decades.

Keeshan also had a Saturday morning show called Mister Mayor during the 1964-1965 season. He had a longtime close friendship with Fred Rogers of Mister Rogers' Neighborhood. Each paid visits to the other's show in 1970, and they appeared together on the PBS special Springtime with Mister Rogers in 1980. The following year, Rogers appeared briefly in Keeshan's TV special Good Evening, Captain (following Keeshan's 1981 heart attack); Rogers and Dick Clark presented Keeshan with flowers at the end of the show. 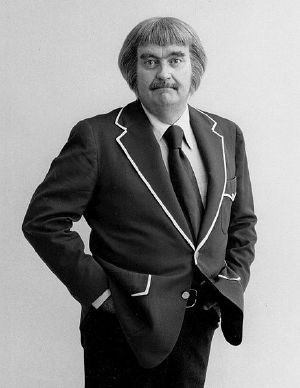 As the easy-going Captain with his Kangaroo like pockets and his bushy mustache, Keeshan engaged young children fun approach to literature, science, and especially music. Children learned most easily, he argued, when information and knowledge became a source of delight. Keeshan's approach represented a rejection of pressures towards the increased commercialization of children's programming as well as a toning-down of the high volume, slapstick style associated with earlier kid show hosts, such as Pinky Lee, Soupy Sales, and Howdy Doody's Buffalo Bob.

Unlike many other children's programs, Captain Kangaroo was not filmed before a studio audience and did not include children in its cast. Keeshan wanted nothing that would come between him and the children in his television audience and so spoke directly to the camera. He also personally supervised which commercials could air on the program, and promoted products, such as Play-Dough and Etch-a-Sketch, which he saw as facilitating creative play, while avoiding those he felt purely exploitative.

Did you know?
In his children's television shows Bob Keeshan always stressed the power of the "magic" words: "Please" and "Thank you."

He would regularly sit down and read an entire book, accompanied by nothing but music and illustrations. And every day he stressed the simple power of two "magic" phrases, the first being "Please" and the second being "Thank you."[6]

As his program's popularity grew, Keeshan took on an increasingly public role as an advocate for children, writing a regular column about children and television for McCall's magazine and occasional articles for Good Housekeeping, Parade, and other publications. He also wrote original children's books (as well as those tied to the Kangaroo program) and recorded a series of records designed to introduce children to classical and jazz music. He appeared at "tiny tot" concerts given by symphony orchestras in more than 50 cities, offering playful introductions to the musical instruments and the pleasure of good listening.

"Captain Kangaroo" aired in the early mornings on CBS until 1985, when the network canceled the show to expand its morning news program. 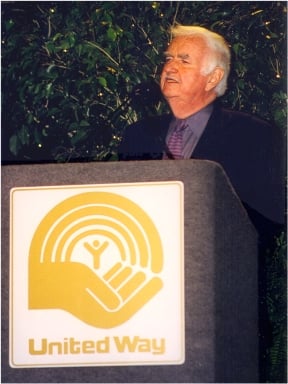 Bob Keeshan speaking at a United Way event in 1999.

He was a strong advocate against video game violence and took part in the congressional hearings in 1993.

In the 1990s, Keeshan expressed an interest in bringing back a new version of Captain Kangaroo as a gentler and kinder answer to the violent cartoons on children's television. Despite having sponsors and television stations lined up, he was unable to obtain permission from ICM, the company that owned the rights to Captain Kangaroo at that time.

Bob Keeshan was a television pioneer and spent 40 years in television, all of them in children's programming. He was known for creating a safe place for children to grow up.

Keeshan was a staunch advocate for children. In a 1983 lecture delivered at Fordham’s Graduate School of Education, he expressed the importance of making children feel their value:

We must all work to motivate our young, to make them feel good about themselves and feel good about us. We must let them know that they are—each of them—unique and of great value to us.[1]

In his lifetime, Keeshan was awarded no fewer than eight Honorary degrees and was named an Honorary Fellow by the American Academy of Pediatrics. In 1980 He was named TV father of the Year. In 1990 he was inducted into the Clown Hall of Fame.[1]

Keeshan received many awards, including:

Retrieved from https://www.newworldencyclopedia.org/p/index.php?title=Bob_Keeshan&oldid=1075631
Categories:
Hidden category:
This page was last edited on 6 August 2022, at 14:25.
Content is available under Creative Commons Attribution/Share-Alike License; additional terms may apply. See Terms of Use for details.