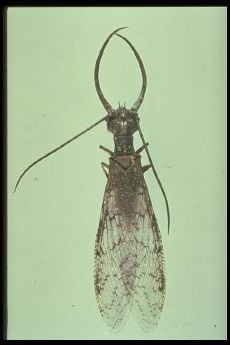 The male dobsonfly has long mandibles

Mandibulata is a group of arthropods characterized by mandibles (mouthparts) used for biting, cutting, and holding food. This group is variously considered as a subphylum (Sikes 2007; Brands 2005; Rogers 2007; HBE 2007), a phylum (Margulis and Schwartz 1998), or as not a natural group (Wills et al. 1998). For those that hold Mandibulata as a subphylum, it is considered to include the insects, crustaceans, millipedes, and centipedes. Mandibulata generally is contrasted with the Arachnomorpha (arachnids and trilobites), with the arachnids possessing pincer-like mouthparts (chelicerae) instead of mandibles.

Today, biological classification strives to based taxonomies on lineage;that is, the establishment of natural groups based on shared ancestry. While members of Mandibulata all share mandibles, at least during some stage of the life cycle, there is disagreement whether these members represent a natural group or an assemblage based on non-derived characters.

Arthropods are generally classified together as a phylum (Arthropoda) of animals and include the insects, arachnids, and crustaceans, as well as millipedes and centipedes, among others. Approximately 80 percent of extant (living) animal species are classified as arthropods. Arthropods are invertebrates that are characterized by the possession of a segmented body, a pair of jointed appendages on each segment, and an exoskeleton.

A great many of the arthropods have mandibles. A mandible is either of a pair of arthropod mouthparts used for biting, cutting, and holding food. Mandibles are often simply referred to as jaws. They are on the third or fourth head segment (Kazlev 2002).

In many taxonomic schemes, the arthropods with mandibles form the clade Mandibulata, comprising the extant Myriapoda (millipedes, centipedes, and relatives), Crustacea (crustaceans, such as lobsters, crabs, and barnacles) and Hexapoda (insects and three small groups of insect-like animals with six thoracic legs). They are also characterized by the presence of one or two pairs of antennae and have groups of eight cells in the retinula of the compound eye (if one exists).

Mandibulata is held to be a sister group to the rest of arthropods, the clade Arachnomorpha (Chelicerata+Trilobita). The mandibulates constitute the largest and most varied arthropod group.

Unlike the chelicerae of arachnids, mandibles can often be used to chew food. Mandibulates also differ from chelicerates by having three distinct body regions: head, thorax, and abdomen (the prosoma of chelicerates is not a fusion of head and thorax, although often called a cephalothorax). The arachnid chelicerae is a pincer-like mouthpart of the anterior appendage, composed of a base segment and a fang portion. Chelicerates also lack antennae.

This view of Mandibulata as a natural group has been long established, and is still held by many today (Kazlev 2002). For example, Sikes (2007), Brands (2005), Rogers (2007), and Columbia Encyclopedia (HBE 2007) all list Mandibulata as a subphylum of the phylum Arthropoda that includes these groups. Margulis and Schwartz (1998) consider Mandibulata a phylum and limits it to insects, millipedes, centipedes and relatives, while the crustaceans are placed in their own phylum, Crustacea. 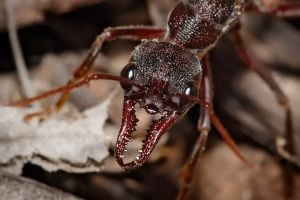 The mandibles of a Bull ant

Insect mandibles are as diverse in form as their food. For instance, grasshoppers and many other plant-eating insects have sharp-edged mandibles that move side to side. Most butterflies and moths lack mandibles as they mainly feed on nectar from flowers.

Queen bees have mandibles with sharp cutting teeth unlike worker bees, who have toothless jaws. Male dobsonflies have slender mandibles up to 2.5 centimeters long, half as long as the insect's body. Potter wasps use their mandibles to mix droplets of water with clay while constructing a nest.

Ants have long, broad, serrated jaws, used for digging, collecting food, fighting and cutting, and are probably the most important work tool ants possess. Ants typically bite each other when fighting. Some ants use mandibles to injure the enemy and squirt poison into the wound. Harvester ants use their mandibles to collect and carry seeds. Army ants have sharp mandibles that are better adapted for fighting than obtaining food or nursing the larvae. Carpenter ants make their nests in various wooden structures, which they hollow out with their sharp mandibles. 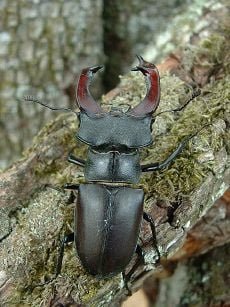 Stag beetle with mandibles modified no longer used in feeding

The shape and size of beetle mandibles varies from species to species depending on the food preferences. For example, carnivorous beetles have extended mandibles to seize or crush prey. Tiger beetles' mandibles (similar to the piercing canine teeth of tigers) are well adapted for killing prey. Diving beetle and firefly larvae have hollow mandibles that can inject digestive fluid to liquefy the tissues of the prey. When this process is over, they suck the digested tissue through the mandibles.

The antler-like jaws of stag beetles are essentially their namesake trait. In some tropical species, they can be up to 10 centimeters, as long as the body of the beetle. These mandibles are primarily used in combat.

Caterpillars use sharp mandibles to cut leaves in side-to-side motions. Only a few moths have functional mandibles in the adult stage. The most notable example are members of the family Micropterigidae, small moths with toothed mandibles used for chewing pollen grains, lacking even the most rudimentary proboscis.

Centipedes have strong, bristly mandibles that have a row of teeth in all centipedes except for members of the order Geophilomorpha. Millipedes have small mandibles that are their only functioning mouthparts, as the maxillae are fused to the lower lip (labium). 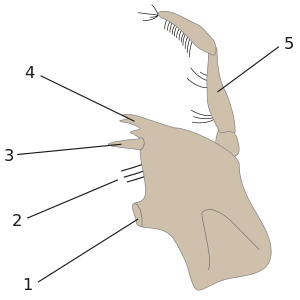 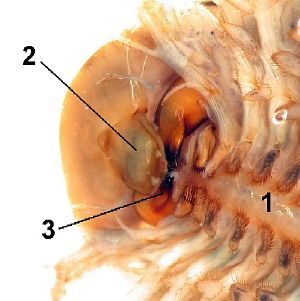 Head of a tadpole shrimp, with the mandibles labelled 3

Crustaceans have a pair of mandibles that typically consist of an enlarged basal segment (coxa) and a palp (sensory feeler) consisting of all other segments. In some groups, such as the Branchiopoda, the palp is reduced or absent. Crustacean mandibles may be equipped with special teeth (molar and incisor processes).

Retrieved from https://www.newworldencyclopedia.org/p/index.php?title=Mandibulata&oldid=681324
Categories:
Hidden category:
This page was last edited on 2 April 2008, at 11:40.
Content is available under Creative Commons Attribution/Share-Alike License; additional terms may apply. See Terms of Use for details.