Fireflies (family Lampyridae), also called lightning bugs, are luminous beetles. These names come from the fact that the adults of some species emit flashes of light to attract mates for sexual reproduction, using special light-emitting organs in the abdomen. Fireflies also glow as larvae and are known as "glowworms."

In addition to reflecting the rich diversity and order in nature (such as examples of synchronous flashing), the fact that fireflies utilize a spectrum of light visible to human beings allows them to provide joy to countless humans who observe their displays. Thus, in addition to fulfilling a necessary individual purpose related to reproduction, the fireflies offer an aesthetic benefit to people.

There are more than two thousand species of fireflies, found in temperate and tropical environments around the world. Most fireflies in the United States are found east of the Rocky Mountains. Although they have "fly" in their name, fireflies are not "true flies," which are members of the order Diptera. 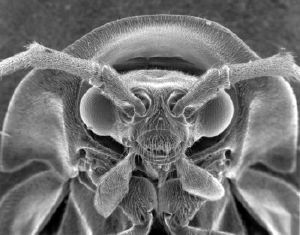 Scanning electron micrograph of a firefly

Fireflies tend to be soft-bodied, often with the elytra (modified, hardened forewing) more leathery than in other beetles. They are small to medium-sized, and some are colorful. Though the females of some species are similar in appearance to males, larviform females are found in many other firefly species. These females can often only be distinguished from the larvae because they have compound eyes.

The most commonly known fireflies are nocturnal, though there are numerous species that are diurnal. Most diurnal species are non-luminescent and use pheromones to find mates. Some day-flying species that remain in shadowy areas, such as Lucidota species, do produce light. Some species glow light instead of flashing light.

There are three main genera of fireflies in North America: Photinus, Photuris, and Practomena. They are distinguished by subtle morphological differences.

Fireflies can recognize their own species and the sex of another firefly by species-specific flash patterns (variations in pulse rate, duration and number of pulses) (Lewis and Lloyd 2003).

The life cycle of most firefly species takes two years. A few days after mating, which occurs in the spring, a female lays her fertilized eggs on or just below the surface of the ground. The eggs hatch 3-4 weeks later and the larva feed until the end of the summer (Drees and Jackman 1999). In the United States, fireflies may persist in the larvae stage for 1-3 years (Lewis and Lloyd 2003). The larvae are commonly called glowworms, not to be confused with the distinct beetle family Phengodidae. Lampyrid larvae have simple eyes.

Fireflies overwinter (some species for several years) during the larval stage. Some do this by burrowing underground, while others find places on or under the bark of trees. They emerge as adults in the spring. After several weeks of feeding, they pupate for one to 2.5 weeks and emerge as adults. The adult firefly's life span lasts only a few weeks, during which reproduction is their main goal.

The larvae of most species are specialized predators and feed on other larvae, small insects, earthworms, terrestrial snails, and slugs (Drees and Jackman 1999). Some are so specialized that they have grooved mandibles, which deliver toxic digestive fluids directly into their prey before sucking out the liquefied body contents (Dress and Jackman 1999). The diet of adults is variable. It has been reported that some are predatory and some feed on plant pollen or nectar.

Many species use their species-specific flash pattern to court mates. In the Photinus species, males fly above the ground, emitting flash patterns to attract females. The females sit below watching the males and respond with their own flashes of light (Lewis and Lloyd 2003). Female Photuris fireflies are known for spying on and mimicking the mating flashes of other fireflies (such as Photinus) for the sole purpose of predation.

Tropical fireflies, particularly in Southeast Asia (Thailand and Malaysia), routinely synchronize their flashes among large groups, a startling example of spontaneous biological order. This phenomenon occurs through the night along river banks in the Malaysian jungles every day of the year. It is significantly rarer in the Western hemisphere. Current hypotheses about the causes range from diet, social interaction, and altitude. In the United States, one of the most famous sightings of fireflies blinking in unison occur near Elkmont, Tennessee in the Great Smoky Mountains during the second week of June (Vaykay 2010). The phenomenon has been observed as well in Congaree National Park in South Carolina (Cross 2004). 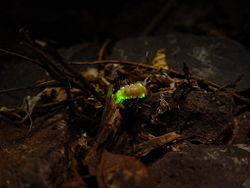 Some fireflies do not glow as adults, but all glow as larvae. Bioluminescence serves a different function in lampyrid larvae than it does in adults. It appears to be a warning signal to predators, since many firefly larvae contain chemicals that are distasteful or toxic, due to defensive steroids they produce in their bodies (Rice 2005).

Light production in fireflies is due to a chemical reaction that occurs in specialized light organs, usually on the lower abdomen. The reaction that produces light occurs in specialized cells called photocytes. In these photocytes, when oxygen combines with calcium, adenosine triphosphate and the enzyme luciferase acts on the substrate luciferin to stimulate light emission (Rice 2005). This reaction can only occur in the presence of oxygen (Lewis and Lloyd 2005). Nitric oxide plays a large role in generating light production because it can inhibit oxygen consumption in mitochondria. In fireflies, the release of nitric oxide inhibits mitochondria from using oxygen, thus the oxygen is used in producing light instead. This reaction is of scientific interest, and genes coding for these substances have been spliced into many different organisms.

The ancient Chinese sometimes captured fireflies in transparent or semi-transparent containers and used them as (short-term) lanterns. They are revered in Japan and in Japanese poetry, a firefly is a common metaphor for love (Lewis and Lloyd 2003). The firefly is the state insect of Pennsylvania in the United States.

Photopollution endangers fireflies because they depend on low-light backgrounds for their flash pattern based courtship to occur. With manmade light filling the night sky, breeding among fireflies is reduced (Lewis and Lloyd 2003).

Retrieved from https://www.newworldencyclopedia.org/p/index.php?title=Firefly&oldid=975428
Categories:
This page was last edited on 24 October 2013, at 14:39.
Content is available under Creative Commons Attribution/Share-Alike License; additional terms may apply. See Terms of Use for details.