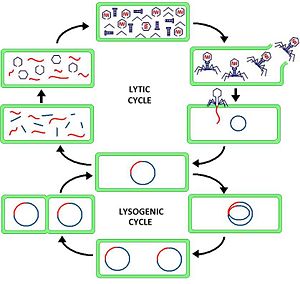 Lytic cycle is one one of the two alternative life cycles of a virus inside a host cell, whereby the virus that has entered a cell takes over the cell's replication mechanism, makes viral DNA and viral proteins, and then lyses (breaks open) the cell, allowing the newly produced viruses to leave the now disintegrated host cell to infect other cells. This method of replication is contrasted with the lysogenic cycle, whereby the virus that has infected a cell attaches itself to the host DNA and, acting like an inert segment of the DNA, replicates when the host cell divides. The lysogenic cycle causes no harm to the host cell, but the lytic cycle results in the destruction of the infected cell.

The lytic cycle is typically considered the main method of viral replication as it is more common. Even the lysogenic cycle can lead to the lytic cycle when there is an induction event, such as exposure to ultraviolet light, that causes this latent stage to enter the lytic cycle.

Through better understanding the lytic cycle, scientists can better understand how the immune system responds to repel these viruses and how new technologies can be developed to overcome viral illnesses. Much research is being done in an effort to learn how to disrupt viral replication in order to tackle the main serious viral diseases affecting humans, animals, and agricultural crops. For example, the Epstein-Barr virus (EBV) manifests both a latency phase and a lytic replication phase in its life cycle. Scientists hope one day to be able to understand how to stop the triggers that initiate the destructive replicative cycle of this human herpesvirus.

Viral reproduction is most fully understood through studying viruses that infect bacteria, known as bacteriophages (or, commonly, phages). The lytic cycle and the lysogenic cycle are two fundamental reproductive processes that have been identified. The following is a description of these cycles based on bacteriophages.

The lytic cycle involves the virus entering a host cell, taking control of the host DNA to produce viral DNA and the viral proteins that provide the structural component of the bacteriophage, and then, when the cell has many new virus particles assembled, digesting the host cell wall from within and releasing the new viruses. For example, the bacteriophage lambda, after infecting an E. coli host cell, normally multiplies until several hundred progeny are produced, at which time the bacterial cell is lysed and the progeny released (Alberts et al. 1989).

The lysogenic cycle involves the virus entering the cell, and instead of creating new virus particles, is characterized by integration of the bacteriophage nucleic acid into the host bacterium's genome. The newly integrated genetic material acts as an additional set of genes that can be replicated when the DNA of the host cell is replicated and the host cell divides. The virus is thus transmitted to daughter cells at each subsequent cell division, although the phages remain inert, causing no harm to the host cells. In the case of the bacteriophage lambda, this is a more rare occurrence than the lytic cycle (Alberts et al. 1989). However, there can be induction events, such as exposure to ultraviolet light, that leads to the lytic cycle even in these cases.

Attachment. The virus first attaches itself to a specific host cell. In the case of the T4 phage, a commonly studied bacteriophage that infects the bacterium Escherichia coli, this attachment is done by the tail fibers of the virus having proteins that have an affinity with the host cell wall. The virus attaches at places called receptor sites (Towle 1989). A virus also may attach by simple mechanical forces.

Penetration. To infect a cell, a virus must first enter the cell through the plasma membrane and (if present) the cell wall. It then releases its genetic material (either single- or double-stranded RNA or DNA) into the cell. In the case of the T4 phage, after attachment to the host cell, the virus first releases releases an enzyme that weakens a spot in the cell wall of the host (Towle 1989). The virus then injects its genetic material much like a hypodermic needle, pressing its sheath up against the cell and injecting its DNA into the host cell through the weak spot in the cell wall. The empty capsid stays on the outside of the host cell. Other viruses enter their host cell intact, and once inside the capsid dissolves and the genetic material is released; this process is known as uncoating (Towle 1989). Once the virus has infected the cell, it also can be targeted by the immune system.

Replication. The virus' nucleic acid uses the host cell’s machinery to make large amounts of viral components, both the viral genetic material (DNA or RNA) and the viral proteins that comprise the structural parts of the virus. In the case of DNA viruses, the DNA transcribes itself into messenger RNA (mRNA) molecules that are then used to direct the cell's ribosomes. One of the first polypeptides to be translated is one that destroys the hosts' DNA. In retroviruses (which inject an RNA strand), a unique enzyme called reverse transcriptase transcribes the viral RNA into DNA, which is then transcribed again into RNA. In the case of the T4 phage, the E. coli DNA is inactivated and then the DNA of the viral genome takes over, with the viral DNA making RNA from nucleotides in the host cell by using the enzymes of the host cell.

The replication is often (for example, in T4) regulated in three phases of mRNA production followed by a phase of protein production (Madigan and Martinko 2006). In the early phase, the enzymes involved modify the hosts DNA replication by RNA polymerase. Among other modifications, virus T4 changes the sigma factor of the host by producing an anti-sigma factor so that the host promotors are not recognized any more but now recognize T4 middle proteins. In the middle phase, the virus nucleic acid is produced (DNA or RNA depending on virus type). In the late phase, the structural proteins are produced, including those for the head and the tail.

Assembly. After many copies of viral components are made, they are assembled into complete viruses. In the case of the T4 phage, proteins coded for by the phage DNA act as enzymes for construction of the new phages (Towle 1989). The entire host metabolism is directed toward this assembly, resulting in a cell filled with new viruses.

Lysis. After assembly of the new virus particles, an enzyme is produced that breaks down the bacteria cell wall from within and allows fluid to enter. The cell eventually becomes filled with viruses (typically 100-200) and liquid, and bursts, or lyses—thus giving the lytic cycle its name. The new viruses are then free to infect other cells and start the process again.

Some viruses escape the host cell without bursting the cell membrane, but rather bud off from it by taking a portion of the membrane with them. Because it otherwise is characteristic of the lytic cycle in other steps, it still belongs to this category. HIV, influenza, and other viruses that infect eukaryotic organisms generally use this method.

The bacteriophage lambda is an example of a virus that can exhibit either a lytic cycle or a lysogenic cycle. Normally, when it infects an E. coli host, it goes through the lytic cycle, multiplying to produce several hundred new phage particles and then the bacterial cell lyses to release these particles. Under more rare conditions, the free ends of the linear DNA molecules of the phage form a DNA circle that becomes integrated into the circular host chromosome and follows the lysogenic cycle, multiplying normally with the host DNA. An environmental insult, such as exposure to ionizing radiation or ultraviolet light can cause the integrated provirus to leave the host chromosome and follow the normal lytic cycle of viral replication (Alberts 1989).

In essence, there is a switch-like mechanism that establishes whether the lambda bacteriophage will multiply within the host cytoplasm and kill the host cell or instead be integrated into the host cell DNA and be replicated whenever the bacterium divides. This switch results from the proteins encoded by the viral genome (about 50 genes). These genes are transcribed differently in the two states, with the integrating bacteriophage requiring production of the lambda integrase protein, which is essential for insertion of the viral DNA into the bacterial chromosome and also represses production of the viral multiplication proteins that would kill the host cell.

Retrieved from https://www.newworldencyclopedia.org/p/index.php?title=Lytic_cycle&oldid=886635
Categories:
Hidden category:
This page was last edited on 22 December 2008, at 16:42.
Content is available under Creative Commons Attribution/Share-Alike License; additional terms may apply. See Terms of Use for details.