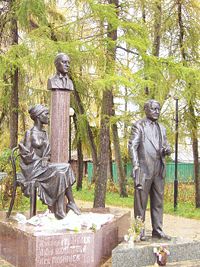 Monument to Lev Gumilev and his parents in Bezhetsk.

Lev Nikolayevich Gumilyov (Russian: Лев Никола́евич Гумилёв) (October 1, 1912 – June 15, 1992), also known as Lev Gumilev, was a Russian historian. His unorthodox ideas on the birth and death of ethnoses (ethnic groups) have given rise to the political and cultural movement known as "Neo-Eurasianism."

Neo-Eurasianism is a Russian school of thought, popularized in Russia during the years leading up to and following the collapse of the Soviet Union, that considers Russia to be culturally closer to Asia than to Western Europe. The school takes its inspiration from the Eurasianists of the 1920s, notably Prince N.S. Troubetskoi and P.N. Savitsky.

The idea of Eurasianism contrasts with Konstantin Leontyev's Byzantism, which is similar in its rejection of the West, but identifies with the Byzantine Empire rather than with Central Asian tribal culture. Neo-Eurasianism also has aspects of national mysticism, and emphasizes the opposition of a united Eurasia against the transatlantic West.

His parents were two prominent poets, Nikolay Gumilev and Anna Akhmatova. They divorced when Lev was 7 years old, and his father was executed because of his anti-bolshevik sympathies when Lev was just 9. During his mother's persecution in the 1930s, he was expelled from the Leningrad University and deported to gulags, where he would spend most of his youth, from 1938 until 1956. During a brief stint at large, he joined the Red Army and took part in the Battle of Berlin. In order to secure his release, Akhmatova was forced to publish dithyrambs to Stalin, but this didn't help. Their relations remained strained, as Lev blamed his mother for the misfortunes that had dogged his youth. 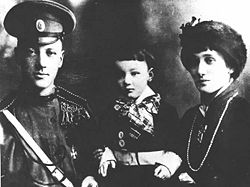 After Stalin's death, Gumilev joined the Hermitage Museum, whose director, Mikhail Artamonov, he would come to appreciate as his mentor. Under Artamonov's guidance, he became interested in Khazar studies and steppe peoples in general. In 1950s-1960s he participated in several expeditions to the Volga Delta and North Caucasus. He proposed an archaeological site for Samandar as well as the theory of the Caspian transgression in collaboration with geologist Aleksandr Alyoksin as one of the reasons for Khazar decline.[1] In 1960, he started delivering lectures at the Leningrad University. Two years later, he defended his doctor's thesis on ancient Turks. From the 1960s, he worked in the Geography Institute, where he would defend another doctoral thesis, this time in geography.

Although his ideas were rejected by the official Soviet doctrine and most of his monographs banned from publication, Gumilev came to attract much publicity, especially in the period of Perestroika during the Gorbachev era. As an indication of his popularity, the Kazakh president Nursultan Nazarbayev ordered the Lev Gumilev Eurasian University to be erected just opposite his own palace on the central square of new Kazakh capital, Astana.

Gumilev attempted to explain the waves of nomadic migration that rocked the great steppe of Eurasia for centuries by geographical factors, such as annual vacillations in solar radiation, which determine the area of grasslands that could be used for grazing livestock. According to this idea, when the steppe areas shrank drastically, the nomads of Central Asia began moving to the fertile pastures of Europe or China.

To describe his ideas on the genesis and evolution of ethnoses, Gumilev introduced the concept of "passionarity," which may be explained as the level of vital energy and power characteristic of any given ethnic group. Gumilev argued that they pass through stages. The stages include: Rise, development, climax, inertial, convolution, and memorial. It is during the "acmatic" phases, when the national passionarity reaches its maximum heat, that the great conquests are made. The current state of Europe he described as deep inertia, or "introduction to obscuration," to use his own term. The passionarity of the Arabic world, on the other hand, is still high.

Drawing inspiration from the works of Konstantin Leontyev and Nikolay Danilevsky, Gumilev regarded Russians as a "super-ethnos" which is kindred to Turkic peoples of the Eurasian steppe. Those periods when Russia has been said to conflict with the steppe peoples, Gumilev reinterpreted as the periods of consolidation of Russian power with that of steppe in order to oppose destructive influences from Catholic Europe, that posed a potential threat to integrity of the Russian ethnic group.

Gumilev is often cited as the founder of the Neo-Eurasianist movement, and he was quoted as saying that "I am the last of the Eurasianists."[2]

At the same time, major differences have been noted between Gumilev's work and those of the original Eurasianists.[2] Gumilev's work is controversial both for its scientific methodology (using his own conception of ethnogenesis and the notion of "passionarity") and for overtones of antisemitism. At any rate, Gumilev's work has been a source of inspiration for the Neo-Eurasianist authors, the most prolific of whom is Aleksandr Dugin.

The idea of "Eurasia" as it is referred to here stems from the nineteenth century. It originally referred to the plain extending to the East and West of the Ural mountains. As late as 1915 the Russian geographer V. Semenov-Tian-Shanskii used the term “Russian Eurasia” (Russkaia Evraziia) to designate the expanse from the Volga to the Yenisei Rivers, north to the Siberian Arctic and south to Turkestan.[3] Soon, however, the idea of Eurasia was extended to cover the whole continent as it is now known.

Gumilev's contribution to Neo-Eurasianism lies in the conclusions he reaches from applying his theory of ethnogenesis: That the peoples of the Eurasian steppe, including the Russians, but also the Turkic-speaking nomadic peoples of Central Asia, constitute a "super-ethnos" (a notion comparable to the "civilizations" that many authors have used to describe like minded groups of nations or cultures—such as Samuel P. Huntington in his Clash of Civilizations. It should be noted that Neo-Eurasianists are fiercely opposed to Huntington's taxonomy of civilizations on the Eurasian continent).

In accordance with his pan-Asiatic theories, he supported the national movements of Tatars, Kazakhs, and other Turkic peoples, in addition to those of the Mongolians and other East Asians. Not surprisingly, Gumilev's teachings have enjoyed immense popularity in Central Asian countries. In Kazan, for example, a monument to him was opened in August 2005.

Gumilev did not extend this ethnological ecumenism, however, to the medieval Jews, who he regarded as a parasitic, international urban class that had dominated the Khazars, who in turn had subjected the early East Slavs to the "Khazar Yoke." This last phrase he adapted from the traditional term "Tatar Yoke" for the Mongol domination of medieval Russia, a term Gumilev rejected for he did not regard the Mongol conquest as a necessarily negative event. In particular, and with virtually no support from primary sources, he asserted that the Radhanites had been instrumental in the exploitation of East Slavic people and had exerted undue influence on the sociopolitical and economic landscape of the early Middle Ages. Gumilev maintained that the Jewish culture was, by nature, mercantile and existed outside and in opposition to its environment. According to this view, the Jews are not a nation, but a specific way of thinking by a certain group of people having Jewish genetic heritage and/or sharing the moral norms of Judaism.[4] These ideas have led scholars such as Vadim Rossman, John Klier, Victor Yasmann, Victor Shnirelman, and Mikhail Tripolsky to label Gumilev antisemitic.[5]

Retrieved from https://www.newworldencyclopedia.org/p/index.php?title=Lev_Gumilev&oldid=1083914
Categories:
Hidden category:
This page was last edited on 25 October 2022, at 22:04.
Content is available under Creative Commons Attribution/Share-Alike License; additional terms may apply. See Terms of Use for details.