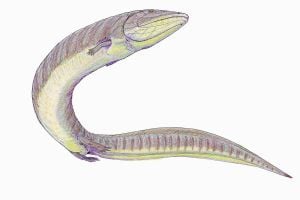 Labyrinthodontia is an extinct, traditional group (superorder or subclass) of amphibians that constituted some of the dominant animals of Late Paleozoic and Early Mesozoic times (about 350 to 210 million years ago). They are considered to include the first vertebrates known to live on solid ground, and to have been ancestral to at least some of the groups of modern amphibians and a bridge to the reptiles (NSMC 2002), although disagreement remains on whether or not the group died out without leaving any descendants.

The name Labryinthodonita, which is from the Greek for "maze-toothed," describes the pattern of infolding of the dentine and enamel of the teeth, which are often the only part of the creatures that fossilize. They are also distinguished by a heavy solid skull, and complex vertebrae, the structure of which is useful in older classifications of the group. Labryinthodonts persisted from the Late Devonian of the Paleozoic into at least the Late Triassic of the Mesozoic, and flourished in the Carboniferous period (NSMC 2002). Some are believed to have persisted until the Cretaceous.

Although Labyrinthodontia is a traditional and still common designation, this group has fallen out of favor in recent taxonomies because it is paraphyletic—that is, the group does not include all the descendants of the most recent common ancestor. This shows not only the changing nature of science—what a few years ago may be presented as a taxonomy for amphibians might be different today—but also reflects on the importance of ascertaining lineage and ancestral-descendant relatedness in modern-day biological classification.

The amphibians that lived in the Paleozoic traditionally were divided into the two subclasses of Labyrinthodontia and Lepospondyli based on the character of their vertebrae (Panchen 1967). Labyrinthodonts are named for the pattern of infolding of the dentine and enamel of the teeth, that resembles a maze (or labyrinth). They are believed to have representatives that were aquatic, semiaquatic, and terrestrial, and that the passage from aquatic environments to terrestrial took place beginning in the Late Devonian (NSMC 2002).

Labyrinthodonts could be up to four meters long. They were short-legged and large headed. Their skulls were deep and massive, and their jaws were lined with small, sharp, conical teeth. Also, there was a second row of teeth on the roof of the mouth. In their way of living, labyrinthodonts were probably similar to fishes—it is speculated that they laid eggs in the water, where their larvae developed into mature animals.

Characteristically labyrinthodonts have vertebrae made of four pieces: an intercentrum, two pleurocentra, and a neural arch/spine. The relative sizes of these pieces distinguishes different groups of labyrinthodonts.

They also appear to have had special sense organs in the skin, that formed a system for perception of water fluctuations. Some of them possessed well developed gills and many seemingly had primitive lungs. They could breath atmospheric air; that was a great advantage for residents of warm shoals with low oxygen levels in the water. The air was inflated into the lungs by contractions of a special throat sac. Primitive members of all labyrinthodont groups were probably true water predators, and only advanced forms that arose independently in different groups and times, gained an amphibious, semi-aquatic mode of living. Their bulky skeleton and their short limbs suggest that the majority of the labyrinthodonts were slow walkers on land.

Amphibians (Class Amphibia) traditionally have been divided into three subclasses: the two extinct subclasses of Labyrinthodontia and Lepospondyli (a small Paleozoic group), and the extant subclass of Lissamphibia. This later subclass includes the three extant orders of Anura or Salientia (frogs), Caudata or Urodela (salamanders, and Gymnophiona or Apoda caecilians).

However, with the emphasis on cladistics in biological classification, recent taxonomies have tended to discard Labyrinthodontia as being a paraphyletic group without unique defining features apart from shared primitive characteristics. Classification varies according to the preferred phylogeny of the author, and whether they use a stem-based or node-based classification. Generally amphibians are defined as the group that includes the common ancestors of all living amphibians (frogs, salamanders, etc) and all their descendants. This may also include extinct groups like the temnospondyls, which traditionally were placed within the subclass Labyrinthodontia, and the Lepospondyls. Recent amphibians are included in the Lissamphibia, which is commonly considered a clade (which means that it is thought that all Lissamphibians evolved from a common ancestor apart from other extinct groups), although it has also been suggested also that salamanders arose separately from a temnospondyl-like ancestor (Carroll 2007).

A good summary (with diagram) of characteristics and main evolutionary trends of the above three orders is given in Colbert (1969, pp. 102-103).

However, as noted above, the grouping Labyrinthodontia has since been largely discarded as paraphyletic; that is, artificially composed of organisms that have separate genealogies, and thus not a valid taxon. The groups that have usually been placed within Labyrinthodontia are currently variously classified as basal tetrapods, non-amniote Reptiliomorpha; and as a monophyletic or paraphyletic Temnospondyli, according to cladistic analysis.

Temnospondyli are an important and extremely diverse taxon of small to giant primitive amphibians. They flourished worldwide during the Carboniferous, Permian, and Triassic periods and a few stragglers continued into the Cretaceous. During their evolutionary history, they adapted to a very wide range of habitats, including fresh-water aquatic, semi-aquatic, amphibious, terrestrial, and in one group even near-shore marine, and their fossil remains have been found on every continent. Authorities continue to disagree over whether some specialized forms were ancestral to some modern amphibians, or whether the whole group died out without leaving any descendants (Benton 2000; Laurin 1996).

The Labyrinthodontia evolved from a bony fish group, the Crossopterygii rhipidistia. Nowadays only a few living representatives of these fish remains: two species of coelacanth and three species of lungfish.

The most diverse group of the labyrinthodonts was the Batrachomorpha. Though these animals looked more like crocodiles, they most probably gave rise to the order Anura, the amphibians without tails, which include, in particular, the modern frogs. Batrachomorphs appeared in the Late Devonian, but they had worldwide distribution in the continental shallow basins of the Permian (Platyoposaurus, Melosaurus) and Triassic Periods (Thoosuchus, Benthosuchus, Eryosuchus). Some batrachomorphs existed until the end of the Cretaceous.

Retrieved from https://www.newworldencyclopedia.org/p/index.php?title=Labyrinthodontia&oldid=680998
Categories:
Hidden category:
This page was last edited on 2 April 2008, at 10:47.
Content is available under Creative Commons Attribution/Share-Alike License; additional terms may apply. See Terms of Use for details.