The Caecilians are elongated, segmented, limbless amphibians. They are classified in the order Gymnophiona or Apoda ("without legs"). Lacking limbs, caecilians resemble earthworms or snakes in appearance.

Amphibians include all the tetrapods (four-legged vertebrates) that do not have amniotic eggs. Despite the lack of external limbs, caecilians, like snakes, are still considered tetrapods because the lack of limbs is considered a derived, secondary characteristic, with the assumption being that they evolved from forms that did have appendages. Caecilians reveal how difficult it is to place the vast diversity of nature into discrete taxonomic boxes based on anatomical features, as well as the importance of common lineage in establishing scientific classification.

The name caecilian means "blind," but most have small eyes. They mostly live hidden in the ground, which makes them the least explored order of amphibians. There are about 200 known caecilian species. Their habitat is in tropical and subtropical regions of the world. Maternal care in caecilians is common.

Caecilian heads are adapted for burrowing, being strong with highly ossified skulls. All caecilians share two tentacles at their head, which are probably used for a second olfactory capability in addition to the normal sense of smell based in the nose.

Due to their underground life, the eyes are small and covered by skin for protection, which have led to the misconception that they are blind. However due to the skin cover their visual sense is limited to simple dark-light perception.

Caecilians have degenerate feet, making the smaller species resemble worms, while the larger species with lengths up to 1.5 m resemble snakes. Limbs and limb girdles are absent in all living caecilians. The tail is reduced or lacking, with the exception of the family Ichthyophiidae, and the cloaca is near the end of the body.

The skin of caecilians is smooth and usually dark-matte, but some species have colorful skins. Inside the skin are calcite scales, which suggest that they are related to the fossil Stegocephalia. However the scales are now believed to be a secondary development, and not directly inherited from Stegocephalia. Caecilians are the only amphibians with dermal scales; these scale-like structures are more similar to fish scales than reptile scales. Reptile scales are keratinized folds of skin, whereas caecilian scales are layers of fibers covered by mineralized nodules.

Except for one lungless species—Atretochoana eiselti, only known from a single specimen collected somewhere in South America—all Caecilians have lungs, but also use the skin or the mouth for oxygen absorption. Often, the left lung is much smaller than the right one, an adaptation to body shape that is also found in snakes.

A Swiss researcher Daniel Hofer has found that certain caecilians produce potent skin poisons from specialized poison glands. The poison helps prevent predation and the poison of the bright yellow caecilian of São Tomé Island (Schistometopum thomense) in West Africa kills other animals kept in the same tank within a few days. The chemical contents of caecilian poison have not been well studied. Werner Himstedt has shown that the skin glands of ‘‘Ichthyophis’’ protect the eggs from germs and fungi.

Caecilians are found in most of the tropical regions of South-East Asia, Africa, and South America, except the dry areas and high mountains.

In South America, their distribution extends well into the temperate north of Argentina. They can be seen as far south as Buenos Aires, Argentina, when they are carried by the flood waters of the Parana river coming from farther north.

The northernmost distribution is of the species Ichthyophis sikkimensis of Northern India. In South-East Asia, the Wallace-Line is not crossed and they are not found in Australia or the islands in between. Ichthyophis is also found in South China and North Vietnam.

Caecilians are the only order of amphibians that only use internal insemination. The male Caecilians have an external organ, the phallodeum, which is inserted into the cloaca of the female for two to three hours.

About 25 percent of the species are oviparous (egg-laying)—the eggs are guarded by the female. For some species, the young caecilians are already metamorphosed when they hatch, other hatch as larvae. The larvae are not fully aquatic, but spend the daytime in the soil near the water.

Seventy-five percent of the species are viviparous, meaning that they give birth to already developed offspring. The fetus is fed inside the female with special cells of the oviduct, which are eaten by the fetus with special scraping teeth. The egg laying species Boulengerula taitanus, feeds its young by developing a special outer layer of skin, which the young peel off with similar teeth.

Ichthyophis is oviparous and is also known to show maternal care.

Origin of the name

The name Caecilian derives from the Latin word caecus = blind, referring to the small or sometimes non-existing eyes. The name dates back to the taxonomic name of the first species described by Carolus Linnaeus, which he gave the name Caecilia tentaculata.

The taxonomic name of the order, Gymnophiona, derives from the Greek words γυμνος (gymnos, naked) and οφις (ophis, snake), as the caecilians were originally thought to be related with snakes. This order is sometimes called Apoda, which means "without legs." 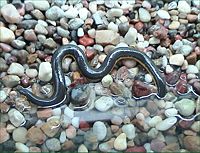 Caecilian from the San Antonio zoo.

Gymnophiona is one of three extant (living) orders of amphibians, the others being Anura (or Salientia), which includes frogs and toads, and Caudata (or Urodela), which includes salamanders and newts, among others.

Taxonomically, the caecilians commonly are divided into five or six families. The species numbers are approximate and some of these species are identified on the basis of only one specimen. It is likely that not all species have been described yet, and that some of the species described below as different may be combined into one species in future reclassifications. The six families are:

Retrieved from https://www.newworldencyclopedia.org/p/index.php?title=Caecilian&oldid=794370
Categories:
Hidden category:
This page was last edited on 29 August 2008, at 13:26.
Content is available under Creative Commons Attribution/Share-Alike License; additional terms may apply. See Terms of Use for details.