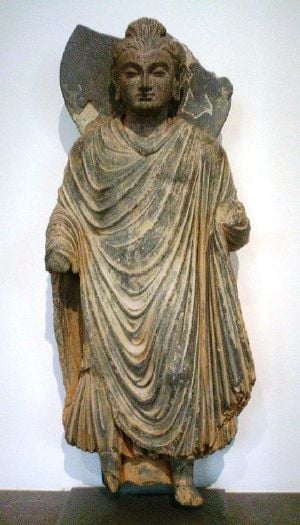 Siddhartha Gautama was born into a Hindu Kshatriya family.

Kshatriya (Hindi: क्षत्रिय, kṣatriya from Sanskrit: क्षत्र kṣatra) is one of the four varnas (social orders) in Hinduism traditionally responsible for the protection of the political-cosmic order (dharma) and the administration of society. Kshatriyas were the military and ruling class of the ancient Hindu society, who initially, acheived their class position on the merits of their aptitude (guna), conduct (karma), and nature (swabhava). However, over time, a Hindu's varna status became hereditary and rules surrounding class status were fixed in the Laws of Manu. Today, the Kshatriya varna includes a broad class of jati groups, differing considerably in status and function but united by their claims to rulership, the pursuit of war, or the possession of land.

It is notable that several key figures in Buddhism, Jainism, and Hinduism were Kshatriyas, indicating the power and prestige that this group once held in ancient Indian society. Indeed, the famous religious leaders Gautama Buddha and Mahavira (as well as Lord Rama and Lord Krishna) all belonged to this social order. In addition to their religious impact, the Kshatriya class also played a very important role in the development of Indian political thought, penning key texts of political strategy such as the Arthashastra.

In Sanskrit, the word "Kshatriya" is derived from kšatra, meaning "dominion, power, government" from a root kšī "to rule, govern, possess." Old Persian xšāyaθiya ("emperor") and xšaθra ("realm") are related to it, as are the New Persian words šāh ("emperor") and šahr ("city," "realm"). The Thai word for "king," kasat, and the Malay word for "knight" or "warrior," kesatria or satria, are also derived from it. The term denotes aristocratic status.

In the early Vedic civilization, the warrior caste was called rājanya or kšatrīya. The former was an adjectival form of rājan "ruler, king" from a root rāj "to rule," cognate to the Latin rex "king," the German Reich "empire/realm," and the Thai racha "king." In Persia, the satraps, or "kshatrapa," were the governors, or "protectors," of the Persian Empire's provinces.

According to Hindu mythology, the origins of the Kshatriya class can be explaned by several different theories. First, it is said that when the Hindu god Brahma was involved in the job of procreation due to toil and perspiration, a negative energy emanated from him. This negative energy took form of Rakshasas (Devils) Madhu and Kaitabha, evil and inhuman souls. They started torturing Brahma. Brahma appealed to Lord Vishnu who readily appeared and killed both of them. He explained to Brahma that when a positive energy is utilized, negative energy also emanates, and that a special race of humans should be created to protect the entire human race. Brahma acting on this advice sat down for meditation. At the end of the day four different forms of energy for the human race were formed out of Brahma's body. Brahmins were created at dawn, Kshatriyas at Noon, Vaishyas at dusk and Shudras at night. Note that these were the Varnas (colors) and not "caste" (Jati) as now thought of today. Usually this is told as Brahmins were born from Brahma’s head, ending with Shudras from the feet. In the Rig Veda the varnas were not rigid and were related to ones actions.

The Brahmin varna was reddish as the sky before dawn, Kshatriya varna as the Sun at noon, Vaishya as the evening sky and Shudra the color of night sky. Gradually, the Varna system caught hold of Indian Sub Continent and each varna did its job as per guidelines of Brahma. Brahmins and Kshatriyas were the upper castes and Vaishyas and Shudras the lower castes. Both, Brahmins and Kshatriyas were allowed to study the Vedas. Kshatriyas (pronounced as shatria) also studied the ancient martial arts which were eventually carried by Buddhist monks like Bodhidharma (a Kshatriya) to China and Japan. The Brahmans and Kshatriyas and later the Vaishyas had to perform a communion ceremony called the Upanayanam (thread ceremony) that would symbolize their entry into the Aryan social structure and would be considered reborn, i.e dvijas (twice born). This meant that you accepted the Vedas as the word of God and were willing to perform the rituals and duties outlined under the guidance of your spiritual guide, the Brahman priest.

The Rig Veda contains another Hindu story to explain the origins of the four classes of Hinduism. It is said that the universe began with the great sacrifice of the cosmic being Purusha. From its head (mouth) came the Brahmin class, and from its arms came the Kshatriya (warrior/ruling) class. Other classes came from its legs (Vaishyas) and feet (Shudras). As the warriors, the Kshatryas protected Hindu society whereas the Vaishyas pursued trade, while the Shudras performed menial chores of farming, labor, artisans, and all the jobs required of a society.

In ancient India, there was mobility between varnas, as people learned new skills and changed their actions and occupations. The nomadic tribes of ancient India did not have a fixed caste system. They initially assigned roles based on an individual’s aptitude and ability. This was necessary in order to ensure the tribe's survival. The stronger members of the tribe became the warriors and were given higher status in society, as they were more important to the survival of the tribe at the time. As the tribes became more familiar with farming, they built up surpluses and settled. This more sedentary and leisurely lifestyle shifted the people's focus to accumulating wealth and finding a meaning to life. Priests began to take the preeminent role in society as they ensured spiritual salvation. This led to society forming a more rigid social system, where one's position was determined by birth rather than merit. Thereafter, those in the more powerful classes enforced this caste system to remain in power, a pattern also exhibited by the nobles of Europe. During the Epic Age, people began to question these institutions.

Although the caste system was very fluid early on and an individual rose or fell depending on his own merit, historians generally agree that caste became hereditary around the time of the rise of Buddhism and Jainism based on archaeological, literary, and artistic evidence of the communities that existed in India. Gautama Buddha and Mahavira are two Kshatriya sages who made a lasting impression on the world. They did not believe in the preeminence of the Vedas and taught to the masses, not keeping spirituality to an elite few. Many of the ancient rulers such as Ashoka Maurya were ardent followers of this faith and promoted it throughout the Mauryan empire. This resulted in the decline in status of the Brahman order. Priests in all three faiths were the record keeper and as you will see in the coming examples there was a definite trend towards placing rulers in the Sudra varna if they did not follow Vedic teachings and maintain the prominence of the priestly order, losing their Kshatriya status.

While the term varna refers to the four broad different classes in society, the term jati refers to the different specific endogamous sections of the Hindu Society known as castes. Varna means "color" as well as "veil." In the context of color people have confused it to mean race but it actually represents the distinct qualities (guna) that the four functional classes possess in their hearts and minds. The four different qualities of human beings: 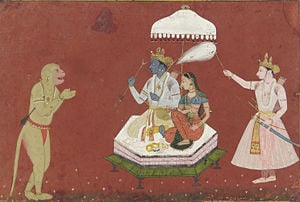 Lord Rama (center) with wife Sita, brother—Lakshmana and devotee Hanuman. Rama and Lakshmana are always shown to be ready for battle, with bow and arrow, as it is their Kshatriya dharma to fight.

In classical Hindu society, the two primary tasks of the Kshatriya varna were to govern the land and to wage war. The latter task was the responsibility of the Raja (King), who was instructed by the Hindu texts to rule by the danda (staff) and inflict punishment (and war) upon enemies of the kingdom. These Hindu kings often ruled justly following the ideals found in their holy scriptures to govern as a Dharma-Raja (Just Ruler), with the main duties being protection of his subjects and livestock.

These Kings also controlled large armies of other Kshatriyas who were employed as soldiers in pursuit of the Kingdom's protection, defence and expansion. However, these soldiers were not employees in a modern sense; rather they believed they were destined for their role as fighters. For the most part, it was seen as their intrinsic duty (svadharma).

The Agnivanshi are people belonging to the Agnivansha. According to legend, they are descended from Agni, the Hindu God of Fire. The Agnivanshi lineage is one of the three lineages into which the Kshatriya caste of Hindus is divided.

In South India, inscribed on the walls of the Vaithheswaran temple, is the Story of Horsemen coming out of Agni Homam conducted by Jambhuuva Maharishi to protect the earth (from Vatapi and Mahi garrisonning the world)is called Vanniyar Puranam. The Head of these horsemen was Rudra Vanniya Maharaja,descendants of whose five sons are called Vannia Kula Kshatriyas, famous among whom is Pallava king Narasimha Varman.

Some Kshatriyas claim descent from the Nāga or the "serpent dynasty," and are called Nagavanshi. Some clans of Nair and Jat caste claim Nagavanshi descent. The Nagavanshi (or Nagabanshi) are known for ruling Chhotanagpur.

Additionally, outside of India, the Ahom kings of Assam claimed descent from the Hindu god Indra (identified with Khunlung) and Syama (a low-caste woman), and called themselves Indravanshi (or Indravamsa) Kshatriyas. The Brahmavansha lineage descends from the Brahmavanshi king Chulki. The Vayuvanshi are another Kshatriya clan although not much is known about the clan.

The Rexulvanshis are popular for being the kings of Surguja. The alien hordes that did not follow priestly customs or traditions (Shakas, Kushans, Indo-Greeks, Hunas, and Parthians) were stated as Vratya Kshatriyas in Manusmriti.

Many historical rulers came from other castes, or were descended from non-Hindu foreign conquerors, and were either granted de facto Kshatriya status by virtue of the power they held, or they created fictionalized family histories to connect themselves to past Kshatriya rulers. For instance, the Sakas, Yavanas, Kambojas, Pahlavas, Paradas, and so on, were foreign invaders from the northwest, but were assimilated into the Indian community as Kshatriyas.

Within the complex and multifaceted world of Hindu symbolism, the Kshatriyas class is represented by the Nyagrodha Banyan tree and the danda (staff). When a Kshatriya undergoes his initiation ceremony, a "staff made of [the aforementioned] wood is given to the Kshatriya initiate with a mantra imparting physical vitality or 'ojas'".[3]

Retrieved from https://www.newworldencyclopedia.org/p/index.php?title=Kshatriyas&oldid=1009080
Categories:
Hidden category:
This page was last edited on 23 January 2018, at 21:11.
Content is available under Creative Commons Attribution/Share-Alike License; additional terms may apply. See Terms of Use for details.