Kintpuash, also known as Captain Jack (c. 1837 – October 3, 1873), was a hereditary chief of the Native American Modoc tribe of California and Oregon. He was born in the Lost River village of Wa’Chamshwash, not far from the sacred sites of Mount Shasta and Crater Lake.

Prompted by the unsustainable conditions of reservation life, Kintpuash led his people to their former traditional lands and fishing grounds. This breaking of the treaty that placed the Modoc on the reservation, led to the unsuccessful war of resistance known as the Modoc War of 1872–1873. After being found guilty of war crimes, Kintpuash and three other tribal leaders were tried by military tribunal, sentenced, and hanged. They were the only Indian combatants to be convicted as war criminals in United States history. Following his death, his head was severed and sent to Washington, D.C. In 1984 his remains were returned to his descendants by the Smithsonian Institution National Museum of Natural History. That action prompted legislation of the Native American Graves Protection and Repatriation Act of 1990.

To some, Kintpuash was a villain who deserved execution, to others he is regarded as a hero who died defending his people and his homeland.

The Modoc and Klamath were neighboring tribes in the Cascade Range of what is now southern Oregon and northern California. Plateau tribes, they shared a common Penutian language.

Though related, they were individual tribes who lived separately within their own villages and had their own customs. Neighbors and sometimes rivals, they would ally for war. There was some intermarriage between members of these two groups.

Kintpuash was born around 1837 in the Lost River village of Wa’Chamshwash. In 1852 he witnessed the death of his father when a Modoc village was slaughtered by a volunteer regiment seeking retaliation for a Pit River tribe's attack on an emigrant party.[1] He initially responded with hostility but eventually actively sought out and befriended white settlers. It was the settlers who gave him his English name, Captain Jack. 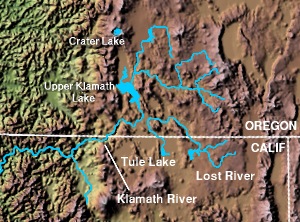 Traditional homelands of the Klamath and Modoc tribes.

As the United States expanded westward, the government pressured the Modoc to give up their traditional territory and move with the Klamath to a reservation near Upper Klamath Lake. This land had traditionally been Klamath land, and when the Modoc joined them in 1864 they were viewed as intruders. The tract of land set aside for them did not provide enough food for the combined tribes, and poverty and sickness increased inter-tribal tensions. Kintpuash's band was forced to move to another part of the reservation to avoid hostilities. Several attempts were made to find a suitable location, but none provided the necessary resources to sustain them.

Acknowledging the bad feeling between Kintpuash's band and the Klamaths, Alfred B. Meacham recommended to the Commissioner of Indian Affairs in Washington, D.C. that Kintpuash's Modocs be given a separate reservation. Pending action on the recommendation, Meacham instructed Kintpuash (now known as Captain Jack) to remain at Clear Lake.

However, the situation there was so bad that they had been compelled to slaughter their horses for food to keep from starving. When they had no more horses to slaughter they were then forced by hunger to seek their former fishing grounds.[2] Kintpuash and his band left the reservation and returned to their original homelands in the Lost River region. By this time a number of settlers had taken up land there. In 1869, the Modoc were rounded up by the United States Army and returned to the Klamath Reservation, but conditions had not improved, and Captain Jack led a band of about 180 Modoc to the Tule Lake area in April 1870.

As the rest of the Modoc were following his lead, it is believed that a Modoc warrior and a Lieutenant got into a verbal argument, pulled their revolvers and shot at each other, both missing their target. The Modoc scrambled to regain their recently cast aside weapons, and fought a short battle before fleeing towards the border of California. After driving the Modoc from camp, Captain Jackson ordered the troops to retreat to await reinforcements. However the militia pursued them and a short battle followed. 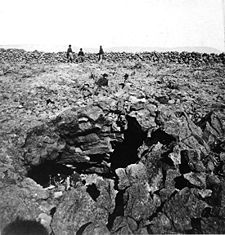 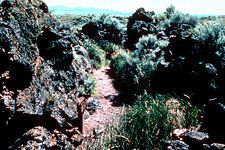 The brief battle, known as the Battle of Lost River, prompted Jack to lead his band into the naturally fortified area in the Lava Beds east of Mount Shasta, now known as Lava Beds National Monument. The band settled in a natural fortress, now known as Captain Jack's Stronghold, consisting of many caves and trenches in the lava beds. When they were finally located, the Army quickly launched an attack on January 17, 1873; the Army was left with 35 dead and many wounded, while the Modoc suffered no casualties.

Captain Jack's advisers, misunderstanding European-Americans' culture and intentions, believed that if their generals were killed the army would go away. Jack hoped, to the contrary, for a peaceful solution to the conflict, and entered into negotiations with a Federal peace commission. During the months-long negotiations, the Modoc hawks gained in influence. Jack was shamed, his opponents even dressing him in the clothing of a Modoc woman to symbolically strip him of his manhood. To bolster his influence, Jack agreed to their plan: he called for a meeting with the commission, of which General Edward Canby was by then the chair, with the intention of killing them all.

During a conference on April 11, Captain Jack and several other Modocs drew pistols upon a pre-arranged signal, and killed two leading members of commission; Captain Jack fatally shot Canby and Boston Charley dispatched Californian clergyman Reverend Eleazar Thomas.[3] Canby was the only general killed during the Indian Wars (Custer's permanent rank was lieutenant colonel). The murder had far from the desired effect, and Canby's successor, General Jefferson C. Davis, brought in over 1000 soldiers as reinforcements. On April 14, the Army again attacked the stronghold, this time forcing the majority of the Modoc to flee.

After six months in the Lava Beds, the Modoc were badly outnumbered, short of water and supplies, and lacking horses. Some continued to fight the army, while others began to surrender. A number of Jack's followers began to desert him. He successfully avoided the Army until a number of Modoc agreed to hunt him down and turn him in; these men included Hooker Jim, Bogus Charley, Shacknasty Jim, and Steamboat Frank.

Did you know?
Kintpuash, also known as Captain Jack, was convicted of war crimes and executed for his actions in the Modoc War

At Big Sand Butte Captain Jack led his band, by then only 33, out of an army trap involving more than three hundred soldiers. But one by one the Modocs surrendered, with the guarantee they would be treated as prisoners of war.

On June 1, Captain Jack himself surrendered, ceremonially laying down his rifle. He was taken to Fort Klamath where a military tribunal found him and several other Modocs guilty of war crimes and sentenced them to death. On October 3, 1873, he was hanged for the murder of General Canby and Reverend Thomas. Black Jim, John Schonchin and Boston Charley were hung with him. Most of his people, including his widow and his sister, were forced to relocate to Indian territory in Oklahoma, where many of their descendants remain.

After the execution, Captain Jack's body was transported by freight train to Yreka, with reports that the body was embalmed to be used as a carnival attraction in the Eastern states.[3] While it is not clear what happened to the body of Kintpuash after his death, it is known that his head was severed and sent to Washington, D.C. On October 25th, Colonel Wheaton wrote the Surgeon General notifying him of the shipment of the four heads of the executed for the Army Medical Museum.[4][5]

In 1898, the skulls were transferred to the Smithsonian Institution. In the 1970s, descendants of Captain Jack learned that the skull was at the Smithsonian and requested its return. In 1984, the Smithsonian returned the remains to Kintpuash's relatives, along with the skulls of Boston Charley, Black Jim, John Schonchin and an unnamed woman whose remains were collected from the Lava Bed Battlefields.[6][7]

Retrieved from https://www.newworldencyclopedia.org/p/index.php?title=Kintpuash&oldid=969646
Categories:
Hidden category:
This page was last edited on 29 May 2013, at 20:19.
Content is available under Creative Commons Attribution/Share-Alike License; additional terms may apply. See Terms of Use for details.