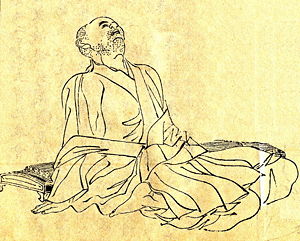 Kamo no Chōmei, by Kikuchi Yosai

Kamo no Chōmei (鴨長明, 1155–1216) was a Japanese author, (waka) poet, essayist, and critic of Japanese vernacular poetry, one of the major figures in the history of Japanese poetics. Born the son of a Shinto priest, he was educated as a poetic artist, and his talent won him recognition from the court and eventually a government post. In 1204, he took Buddhist orders, but after being denied an appointment as priest of Kamo Shrine, he turned his back on society and went to live in the forest as a hermit.

Kamo no Chomei is best known as a classic example of a man of artistic sensibility turned recluse. In 1212, he completed Hojo-ki (The Ten Foot Square Hut), a philosophical work describing his life in seclusion against the backdrop of a series of catastrophes and natural disasters which had afflicted the capital city of Kyoto: the Great Fire of 1177, a windstorm, a two-year famine, the moving of the capital, a disastrous earthquake in 1185, and the bitter civil war between the Taira and Minamoto clans. The Hojo-ki conveys a Buddhist understanding of the vanity of human effort and the impermanence of material things. Kamo no Chomei also wrote Hosshin shu (Examples of Religious Vocation), a collection of stories about legendary recluses. Kamo no Chomei's works represent the best poetry of his age, a time when Japan produced a number of great poets.

Kamo no Chōmei was born Kamo no Nagaakira in 1155, the son of a Shinto priest in Kyoto, Japan. He was thoroughly trained as a poetic artist, and his abilities soon won him grudging recognition from the court and eventually, an official post, in spite of his humble origins. In 1204, he took Buddhist orders, but was denied an appointment as priest at the Kamo Shrine and lost the political support of his sponsors. He decided to turn his back on the world, and for four or five years he lived in the hills of Ohara, before building himself a tiny hermit’s hut in the Hino foothills south of Kyoto. Here he completed Hojo-ki, an account of the disasters that had befallen Kyoto during his lifetime, contrasted with descriptions of natural beauty and the serenity of a hermit’s life.

Chomei remained in contact with the court and the literary world after his retirement from society. In 1205, he was delighted when ten of his poems were included in the Shin kokin-shu, the eight imperial anthology of court poetry. In 1208 - 1209, he began Mumyo sho (“Nameless Notes”), an invaluable collection of literary critiques, anecdotes and poetic lore.

In 1214 or 1215, Kamo completed Hosshin shu (“Examples of Religious Vocation”). He also compiled a selection of his own poems (probably in 1181) and wrote Ise-ki (“Record of a Journey to Ise”), now lost. Kamo no Chomei's works represent the best poetry of his age, a time when Japan produced a number of great poets. His poetry was difficult, but possessed great resonance and depth of tone.

Kamo no Chomei's Hojoki (The Ten Foot Square Hut), is interesting both from a historical and a philosophical point of view. It records a devastating series of calamities which befell Kyoto (or Heian-kyo), the capital city of Japan, during Kamo no Chomei’s lifetime. Kyoto experienced the Great Fire of 1177; a windstorm in 1180 that flattened much of the city; a two-year famine that devastated the area and left the streets littered with corpses and starving residents wandering aimlessly; the moving of the capital; and a disastrous earthquake in 1185; all while the Taira and Minamoto clans were fighting a bitter civil war. In the midst of this, Kamo no Chomei experienced his own personal disappointment and decided to turn his back on the world and retreat into Buddhism. The Hojo-ki conveys a Buddhist understanding of the vanity of human effort and the impermanence of material things, and bears a resemblance to Yoshishige Yasutane’s Chitei-ki (“Account of My Cottage by the Pond”), a work in Chinese prose dating from 981.

Kamo no Chomei regarded at the violence and chaos of his lifetime with Buddhist insight, and wrote lyrically and reflectively about the tragedy of human life. Hojoki opens with these words:

The flowing river
never stops
and yet the water
never stays
the same.

Foam floats
upon the pools,
scattering, re-forming,
never lingering long.
So it is with man
and all his dwelling places
here on earth.

Kamo no Chomei goes on to describe all the calamities he has seen, and what he has observed of human nature. Chomei is specifically interested in how society in distress is just a continuum of everyday human behavior. Powerful men are filled with greed, but those who have no supporters are despised. Possessions are accompanied by many worries, but in poverty there is sorrow. If one person asks another for help, he becomes his slave through obligation; if he takes care of another person, he becomes enslaved by bonds of affection. If a person does not take care of others who ask for help, society views him as deranged. No matter where one lives, or what work one does, there is no peace of mind.

Kamo no Chomei describes how he renounced the world to become a monk-hermit, "Not having any family, I had no ties that would make abandoning the world difficult. I had no rank or stipend. What was there for me to cling to?" He concluded Hojoki by describing the hut he built:

It is a bare ten feet square and less than seven feet high. ... I laid a foundation and roughly thatched a roof. ... I have added a lean-to on the south and a porch of bamboo. Along the west wall I built a shelf for holy water and installed an image of the Buddha. The light of the setting sun shines between its eyebrows. ... On the wall that faces the north I have built a little shelf on which I keep three or four black leather baskets that contain books of poetry and music and extracts from the sacred writings. Beside them stand a folding koto and lute.

My bed on the east wall is a straw mat and fern fronds. There, too, is a window, desk, and brazier.

Outside the hut is a fenced garden to the north and a rock pool to the south, with a bamboo pipe draining water. The woods are close, providing plenty of brush-wood, and only to the west is a clearing beyond vines and overgrown valleys.

In his forest retreat, Chomei watches the seasons change; wisteria blossoms in spring, cuckoos sing in the summer, autumns insects chirp, and in the winter it snows. Since he has no visitors, he takes his idle ease. When not reaing or in prayer, he reflects on places he has visited or strums the lute. Depending on the season he picks fruits, nuts, or greens, gathers flowers or rice husks to weave, or make’s a day’s excursion to the mountains, an ancient temple or a famous gravesite. "And sometimes," he writes, "as is the custom of old age, I awaken in the middle of the night. I stir up the buried embers and make them companions in solitude."

Knowing myself and the world, I have no ambitions and do not mix in the world. I seek only tranquility; I rejoice in the absence of grief.

The spiritual crisis of medieval Japan (twelfth-fourteenth centuries) witnessed the emergence of a new genre, the literature of reclusion, which sought through poetry, essays and stories to find the best means of separating oneself from the evils of society and its false values, and therefore from the impermanence of human existence. There were three types of recluses: hijiri, holy men completely rejected the world and who hid themselves from society as hermits; tonsiesha, who admired and imitated the hijiri but could not completely embrace the material hardship and isolation of their lives; and inja, those who rejected society and relationships to pursue aesthetic liberty in reclusion.

In Hosshinshu, a collection of one-hundred-and-two stories and legendary vignettes, made years after the writing of Hojoki, Kamo no Chomei described two hijiri, Gempin Sozo and Zoga Shonin. Despite his faith and his belief in mappo, the eminent last age, Chomei realized that he was not a hijiri. He found himself too attached to literature, to music, and to an ideal of aesthetic simplicity, and understood that he was a tonseisha, or worse, an inja or sukimono, that is, a secular aesthete.

Kamo no Chomei acknowledged this near the end of Hojoki:

The teachings of the Buddha warn us against feelings of attachment. So now it must be wrong for me to love this thatched hut of mine, and my fondness for quiet and solitude must be a block to my salvation. Why have I wasted precious time in the recital of these useless pleasures?

The Hosshinshu is a collection of stories about men who have sought seclusion from worldly life and its distractions, and who have fiercely guarded that seclusion. In describing his work, Kamo no Chomei said,

I collected and wrote down stories read and listened to here and there, without looking for profound doctrines. ... I did not write down tales coming from countries far away like India and China, neither did I collect stories of Buddha and Bodhisattvas unsuitable for me. I have only recorded those easily understood stories of people of our country, which I had occasion to listen to.

Most of the holy men portrayed in the Hosshinshu shared several common characteristics. They were wanderers, living in a mental state of reclusion even when in the midst of other people; they minimized their material possessions; and they hid themselves and even antagonized people or pretended to commit crimes in order to maintain their seclusion and peace of mind. Chomei commented,

It is a fact that men who truly have faith will fear being reverenced by others and concealing their virtue they will appear to exhibit only faults. For even if someone forsakes worldly life, if he does it with the thought of hearing people say how noble is his renunciation and how worthy his religious practice, then this is far worse than the pursuit of worldly fame.

Retrieved from https://www.newworldencyclopedia.org/p/index.php?title=Kamo_no_Chomei&oldid=1080933
Categories:
Hidden category:
This page was last edited on 5 October 2022, at 02:34.
Content is available under Creative Commons Attribution/Share-Alike License; additional terms may apply. See Terms of Use for details.