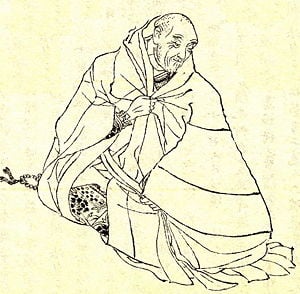 Taira no Kiyomori (平 清盛, 1118 - 1181) , a general of the late Heian period of Japan, established the first samurai-dominated administrative government in the history of Japan. Thought to be the natural son of Emperor Shirakawa, he was adopted by Taira Tadamori of the powerful Taira samurai clan and spent his youth at court. From 1137 to 1156, he held provincial governorships. In 1156, he helped to defend Emperor Go-Shirakawa against a coup by the Minamoto clan, and in 1160 he crushed the Minamoto clan and took political and military control of the capital, Kyoto. He used his power over Emperor Go-Shirakawa to gain increasingly higher ranks in the non-samurai government, becoming the first samurai to sit in the grand council of state, and in 1167, the Daijō Daijin, chief minister of the government, the highest official position at court. Taira Kiyomori aroused widespread resentment by appointing his Taira kinsmen to government posts and marrying his daughters into the imperial family. In 1179, he forced the resignation of his rivals from all government posts and imprisoned Cloistered Emperor Go-Shirakawa. In 1180, he placed his two-year-old grandson on the throne and moved the capital to Fukuhara (modern Kobe), in his own domain; protests forced him to return it to Kyoto after six months. In the middle of 1180, Prince Mochihito, called on the Minamoto clan to rise against the Taira, beginning the Genpei War. Though the initial uprising was crushed, the Minamoto eventually gained supremacy throughout Japan. Kiyomori died from an illness early in 1181.

The epic chronicle, Heike monogatari (Tale of the Heike, c. 1220) presents Kiyomori as a ruthless tyrant. His political and military activities helped bring Japan's classical Heian golden age to an end, and initiated events which eventually resulted in the establishment of the Tokugawa shogunate which unified feudal Japan.

Taira Kiyomori, born 1118, was the adopted son of Taira Tadamori; his natural parents were said to be the retired Emperor Shirakawa (1053-1129) and his lover, the younger sister of Gion no Nyôgo (dates unknown). Kiyomori was raised by an aunt, who was closely related to the Gion Shrine in Kyoto, a Shintô shrine dedicated to the worship of dragon deities. (Another document found during the Meiji era (1868-1912) indicates that Kiyomori’s mother was a sister of Gion no Nyôgo.)

After the death of his father, Taira no Tadamori, in 1153, Kiyomori assumed control of the Taira, a powerful warrior clan from the area in western Japan along the Inland Sea, and ambitiously entered the political realm in which he had previously only held a minor post. In 1156, a power struggle erupted between Cloistered Emperor Sutoku and his younger brother, the reigning Emperor Go-Shirakawa. Sutoku attempted to take the throne with the support of the Minamoto warrior clan, under the leadership of Minamoto Tameyoshi. During the bloody and bitter conflict which followed, known as the Hōgen Rebellion, Taira Kiyomori supported Emperor Go-Shirakawa. He eventually prevailed after Minamoto Tameyoshi’s son Yoshitomo defected to the Taira side. Kiyomori ruthlessly executed his enemies and ordered Yoshitomo to behead his own father. Yoshitomo refused, but the order was carried out by another Minamoto.

Defeat of the Minamoto Clan

This victory established the Taira and Minamoto samurai clans as the top warrior clans in Kyoto. However, the two clans entered into a bitter rivalry which culminated three years later during the Heiji Rebellion of 1159. In 1158, Emperor Go-Shirakawa abdicated, intending to control the government from retirement, as was commonly done. During the winter of 1159, dissatisfied with the rewards he had received for his role in the Hōgen victory, Minamoto Yoshimoto took advantage of Taira Kiyomori’s absence from the capital to seize power, precipitating the Heiji Disturbance. Caught off-guard, Kiyomori mustered his forces and used a series of clever maneuvers to overpower the Minamoto. He returned victorious to Kyoto and eliminated the remaining members of the Minamomoto clan. At the request of his wife, Kiyomori showed mercy and exiled Yoshitomo's three youngest sons Yoritomo, Minamoto no Noriyori, and Yoshitsune. The Heiji Disturbance later became the subject of many tales and legends.

The Taira clan mistrusted Cloistered Emperor Go-Shirakawa, who was constantly involved in plots and schemes to further his own power. As the head of the sole remaining warrior clan in Kyoto, Kiyomori was in a unique position to manipulate the court rivalry between the retired sovereign Go-Shirakawa and his son, Nijo tenno (sovereign). With the patronage of the retired sovereign Go-Shirakawa, Kiyomori was able to climb the ranks of government, and to gain positions and titles at court for members of his family. Kiyomori arranged for Cloistered Emperor Go-Shirakawa to marry his wife’s younger sister. In 1167, Kiyomori became the first courtier of a warrior family to be appointed Daijō Daijin, chief minister of the government, the highest official position at court and the de facto administrator of the imperial government. As was customary among high-ranking officials, he soon relinquished the position and leadership of the Taira clan, in order to maintain the social and political prestige of having attained the highest office in the land, but free himself of the attendant duties. Many of the courtiers from traditional (non-samurai noble families) were displeased with Kiyomori's attainment of the rank of Daijō-daijin and with how he comported himself towards other high-ranking courtiers.

In 1171, Kiyomori arranged a marriage between the Emperor Takakura and his daughter Tokuko. Their first son, Prince Tokihito was born in 1178. The next year, in 1179, Kiyomori staged a coup d'etat, forcing the resignation of his rivals from all government posts and subsequently banishing them. He then filled the open government positions with his allies and relatives, and imprisoned Cloistered Emperor Go-Shirakawa. Finally, in 1180 Kiyomori forced the emperor Takakura to abdicate, and placed his two-year-old grandson Tokuhito on the throne as the Emperor Antoku. He moved the capital to his own city of Fukuhara (modern Kobe), which provided ready access to the Inland Sea and the rich trade routes with China.

Beginning of the Genpei War

Many of Kiyomori’s allies were angered by his displays of power and his monopoly on authority. Most of the provincial samurai, and even members of his own clan turned against him. In the middle of 1180, Prince Mochihito, brother of Emperor Takakura, called on Kiyomori's old rivals, the Minamoto clan, to rise against the Taira, beginning the Genpei War. Though the initial uprising was crushed, Minamoto Yoritomo, the son of Minamoto Yoshitomo, who had been exiled in his youth, mustered an army from among the warrior clans in the outlying provinces. Taira forces were sent from the capital to confront them, but had been weakened by years of luxurious living in the capital and were quickly defeated by Yoritomo’s troops. Kiyomori turned over all government administration to his son Munemori in order to devote all his attention to rebuilding his army, but died from an illness early in 1181.

Taira Munemori was left to preside preside over the downfall and destruction of the Taira at the hands of the Minamoto. In 1185, Minamoto Yoritomo eliminated the last of the Taira clan, including the young emperor Antoku, and established Minamoto supremacy throughout Japan.

Taira no Kiyomori is also the main character in the Kamakura period epic, the Tale of Heike.

The Heike nôkyô (平家納経) is a set of 33 scrolls of sutra manuscripts, comprising the 28 chapters of the Lotus Sutra, opening and closing chapters, a dedication, and other sections. Under the direction of Taira Kiyomori and other members of the Taira clan, these manuscripts were copied, one chapter per scroll, and placed in a bronze sutra container, with gold and silver ornamentation of clouds and dragons, which was donated to Itsukushima Shrine (present-day Hiroshima Prefecture)in 1164. Kiyomori was familiar with earlier large-scale sutra copying projects, such as the Kunôjikyô (alternately Ipponkyô shakyô) manuscript of the Lotus Sutra sponsored by retired Emperor Toba (1103-56) and his wife Taikenmon'in (1101-45), but his strong association of the Lotus Sutra with dragon worship was a new concept.

Kiyomori was raised by his aunt, Gion no Nyôgo,who was closely related to the Gion Shrine in Kyoto, where indigenous dragon deities were worshipped, and this project may have been motivated by his belief in the dragon deities. His aunt had bequeathed to Kiyomori a jewel, inherited from Shirakawa, which was said to grant wishes, an attribute associated with the ascent to Buddhahood of the dragon king's daughter in the twelfth "Devadatta" chapter of the Lotus Sutra (J., Daibadattahon). Kiyomori also participated in Buddhist rituals related to the Lotus Sutra, which involved dragon worship. The Sensô kuyô, a Buddhist rite in which 1,000 priests chanted the scripture in order to appease the dragon king, was held frequently near Kiyomori's residence at Fukuhara (the Sannomiya part of Kobe, Hyogo Prefecture) and at Itsukushima Shrine.

Further associations with dragon worship can be found in literary allusions within Heike nôkyô frontispiece paintings.

Retrieved from https://www.newworldencyclopedia.org/p/index.php?title=Taira_Kiyomori&oldid=991942
Categories:
Hidden category:
This page was last edited on 12 November 2015, at 15:29.
Content is available under Creative Commons Attribution/Share-Alike License; additional terms may apply. See Terms of Use for details.