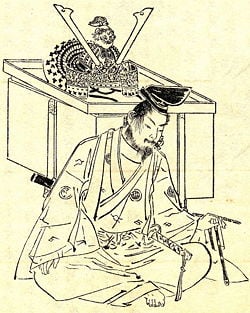 Minamoto no Yoshitsune (源 義経) (1159 – June 15, 1189) was a general of the Minamoto clan of Japan in the late Heian period and early Kamakura period. Yoshitsune, the ninth son of Minamoto no Yoshitomo, was responsible for many of the military victories through which his half-brother, Minamoto no Yoritomo, gained control of Japan and established the Kamakura shogunate. Soon after Yoshitsune's birth his father was put to death, following the Heiji Rebellion of 1159, and he was raised in a monastery. In 1180, at the instigation of the Cloistered Emperor Go-Shirakawa, the Minamoto clan rose up against the Taira clan, who had usurped the emperor’s power. Yoshitune’s elder half-brother, Minamoto Yoritomo, raised a large army of supporters, and Yoshitsune and another brother, Noriyori, went to join him. Yoshitsune’s skill as a general and military strategist enabled the Minamoto troops to win several decisive campaigns against the Taira, including a final battle fought in Japan's Inland Sea. Yoritomo, however, became jealous of Yoshitsune and, though Yoshitsune eluded him for several years, eventually had him killed.

The exploits of Yoshitsune and his faithful follower, the monk Benkei, have become the subject of numerous Japanese folk tales, legends, stories, poems, kabuki plays, and modern films.

Yoshitsune was born Ushiwakamaru (牛若丸) in 1159, the ninth son of Minamoto Yoshitomo (1123-1160). Minamoto Yoshitomo had supported the Taira clan during the Hôgen Disturbance (1156), after which his own father and eleven relatives were put to death. Soon after Yoshitsune’s birth, his father and two eldest brothers were killed in an attempt to defy the Taira during the Heiji Rebellion of 1159. Yoshitsune and his siblings were found, together with their mother, and brought to Taira Kiyomori, who spared them. Yoshitsune was put under the care of Kurama Temple, nestled in the Hiei Mountains near the capital of Kyoto, and his thirteen-year-old brother Yoritomo was banished to Izu Province. Eventually Yoshitsune was put under the protection of Fujiwara no Hidehira, head of the powerful regional Northern Fujiwara clan in Hiraizumi, Mutsu Province.

Little is known for certain about Yoshitsune’s youth, but stories and legends recount various adventures including his slipping away from the monastery to learn the art of swordsmanship from the mythical tengu. In May 1180, Prince Mochihito, the son of Cloistered Emperor Go-Shirakawa, urged the Minamoto to rise against the Taira clan, which had usurped the power of the emperor. Minamoto Yorimasa was crushed at the Battle of the Uji, and Mochihito was killed in June, but the rebellion had been set in motion. In September, Yoshitsune’s brother Yoritomo raised an army in the Kanto district. Yoshitsune, along with another brother from whom they had been separated, Minamoto no Noriyori, soon joined Yoritomo in the last of three conflicts between the rival Minamoto and Taira samurai clans during the Genpei War.

On June 2, 1183, Yoshitsune and Yoritomo’s cousin Minamoto no Yoshinaka won a decisive victory over the Taira at Kurikara, and in late August he occupied Kyoto and attempted to assume the leadership of the Minamoto clan. Yoritomo could not tolerate this, and on the pretext that Yoshinaka’s troops were misbehaving in the capital, he sent Yoshitsune to depose him. In February 1184, Yoshitsune and Noriyori led an army to the Kyoto area and crossed the Uji River at the Uji and Seta bridges. Yoshinaka’s troops lost heart and fled, and Yoshinaka attempted to escape with a handful of retainers. He was trapped at Awazu in Omi Province and committed seppuku. Minamoto Yoritomo now obtained the support of Cloistered Emperor Go-Shirakawa and a mandate to continue the war with the Taira clan.

War With the Taira

In March 1184, Yoshitune and Noriyori were permitted to go to the western provinces. Their first target was a fortification at Ichi no Tani (一の谷), where the Taira had retreated when they fled Kyoto. It was protected by several outposts, including Mikusuyama to the north and Ikuta no mori to the west. Yoshitsune planned to lead ten thousand men north to position themselves to attack from the western flank, while Noriyori would attack from the east with a force of fifty thousand. Yoshitsune launched a surprise night attack on the outpost of Mikusuyama, and took the fort. (According to the Heike Monogatari the surviving defenders, including three of Taira Kiyomori’s grandsons, fled to the coast and passed over to Shikoku, leaving five hundred dead.)

The fortress of Ichi no Tani was protected at the rear by a steep slope. Yoshitsune sent seven thousand of his men under the command of Doi Sanehira to attack the western side of Ichi no Tani, while he led the remaining three thousand men to the cliffs above the rear of the fort. Yoshitsune called for a man who might know a path down the cliffs to the castle, and the monk Benkei furnished him with a guide. While the Taira were distracted by the attacks of Noriyori and Doi in their forward and western positions, Yoshitsune and his men descended the dangerous cliffs and rode into the rear of Ichi no Tani. The Taira were thrown into a panic and ran for their ships, which were anchored just offshore, and set sail, taking the boy emperor Antoku with them. Yoshitsune and Noriyori returned to Kyoto and paraded through the streets, displaying the heads of the Taira warriors which had been taken in battle. 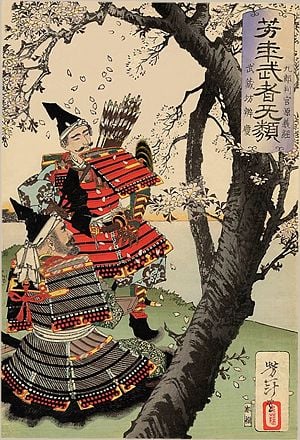 The Minamoto victory at Ichi no Tani opened the way for an attack on the Taira headquarters at Yashima, on Shikoku. Minamoto Yoritomo spent six months organizing his supporters and consolidating his gains. In October, he sent Noriyori on a long and tiring march to eliminate Taira supporters in Kyushu. Yoshitsune remained in Kyoto and acted as his deputy, taking responsibility for quelling any violence and forbidding taxes to be levied without the express consent of the Minamoto.

In March 1185, Yoritomo authorized Yoshitsune to launch an attack on the Taira headquarters in Yashima. Yoshitsune assembled a fleet of ships at Watanabe, in Settsu Province, but on March 22, the night he gave the order to set sail, the weather was so bad that some of the sailors mutinied and refused to follow him. Unperturbed, Yoshitsune landed at dawn on Shikoku, at a point about thirty miles from Yashima. A local warrior informed him that the fort was only lightly guarded because the troops were on an expedition into Iyo. A narrow channel, easily forded at low tide, separated Yashima from the mainland. The Taira fort was situated on a beach facing the mainland, with their ships moored in the shallows directly in front of the fort. Alerted of Yoshitsune’s approach by signal fires, Taira Munemori overestimated the size of the attacking forces and ordered an immediate evacuation. Yoshitsune led his men on a charge into the channel and fighting ensued all around the Taira ships, while their fort was set on fire. At dusk, during a lull in the fighting, the Taira ships moved out of reach, and the next morning they set sail for Shido harbor, with Yoshitsune’s troops pursing them on land. They regrouped at Hikoshima in Nagato, while Yoshitsune crossed over to Suo Province, where he was joined at the last minute by some additional supporters and ships, to prepare for battle.

Yoshitsune had eight-hundred-and-fifty ships and the Taira had only five hundred, but the Taira had nowhere to run and were inspired by the leadership of Taira Tomomori, a skillful warrior. At dawn on April 24, 1185, the Minamoto sailed against the Taira at Dan no Ura. With the tide in their favor, the Taira archers showered arrows on the Minamoto as they approached in their boats. The outcome of the battle was uncertain until one of the Taira commanders, Taguchi Shigeyoshi, defected and showed Yoshitsune which Taira ship held the young emperor. Yoshitsune rallied his forces, and the battle turned in his favor. Emeror Antoku and his mother drowned themselves in the sea, followed by Taira Tomomori and hundreds of other warriors. Munemori was captured and the Taira clan was almost eradicated.

Yoshitsune’s victory at Dan no Ura ensured Yoritomo’s ascendance as shogun, but a rift occurred between the brothers, possibly exacerbated by the Cloistered Emperor Go-Shirakawa. Yoritomo neglected to award Yoshitsune any honors or titles, and did not allow him to enter Kamakura when he brought the prisoner Taira Munemori. Yoshitsune sent a message, the ‘Koshigoe Letter,’ professing his loyalty to the Minamoto clan and Yoritomo, but by late 1185, Yoritomo had decided to eliminate Yoshitsune, and ordered Noriyori to lead an expedition against him in the north. Noriyori refused and was sent into exile. A warrior named Tosa no bô Masatoshi was sent in his place, and was captured and killed by Yoshitsune’s men.

In mid-November, Yoshitsune obtained imperial authorization from Cloistered Emperor Go-Shirakawa to go to war with his elder brother. He allied himself with Minamoto Yukiie, an uncle who had once served alongside Kiso Yoshinaka. When they learned that a large army was approaching from Kamakura, they attempted to flee to Kyushu, but were attacked by Minamoto clansmen loyal to Yoritomo. By December, Yoshitsune was hiding in the hills south of Kyoto with a handful of retainers. Yoshitsune eventually went to Mutsu and found shelter with his old guardian, Fujiwara Hidehira. When Hidehira died in November 1187, he left a will making Yoshitsune acting governor of Mutsu. Hidehira's son Yasuhira refused to accept the will, and the ensuing conflict within the Fujiwara alerted the Kamakura authorities to Yoshitsune’s whereabouts.

On June 13, 1189, at Yoritomo’s insistence, Fujiwara Yasuhira attacked Yoshitsune and the monk Benkei in Fujiwara Motonari’s mansion at Koromogawa. Benkei held off the attackers long enough for Yoshitsune to kill his young wife and daughter and commit seppuku. Minamoto Yoshitsune’s head was taken down to Kamakura and put on display. Years later, when Yoritomo suffered fatal injuries in a fall from his horse, it was rumored that the shôgun had been startled by the ghost of his betrayed brother Yoshitsune.

A remarkable soldier and a classic tragic hero, Yoshitsune became a legend even during his own lifetime. Kujô Kanezane, a supporter of Yoritomo, wrote in his diary in 1185,

Yoshitsune has left great achievements; about this there is nothing to argue. In bravery, benevolence, and justice, he is bound to leave a great name to posterity. In this he can only be admired and praised. The only thing is that he decided to rebel against Yoritomo. This is a great traitorous crime.

Yoshitsune is enshrined in the Shinto shrine Shirahata Jinja in Fujisawa, Kanagawa.

Yoshitsune has long been a popular figure in Japanese myth and lore due to his appearance as the main character in the third section of the Japanese literary classic Heike Monotogari (Tale of the Heike).

Retrieved from https://www.newworldencyclopedia.org/p/index.php?title=Minamoto_no_Yoshitsune&oldid=1086551
Categories:
Hidden category:
This page was last edited on 9 November 2022, at 18:09.
Content is available under Creative Commons Attribution/Share-Alike License; additional terms may apply. See Terms of Use for details.