For other uses of the word Taira see Taira (disambiguation) 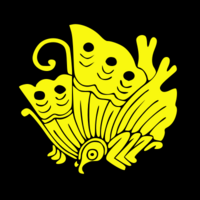 The butterfly Mon (badge) of the Taira is called Ageha-cho (揚羽蝶) in Japanese.

Heike (平家) or Taira (平) or Heishi (平氏) is a Japanese clan name. Along with Minamoto, Taira was a hereditary clan name bestowed by the emperors of the Heian Period on certain ex-members of the Imperial family when they became subjects. The Taira were one of the four important clans that dominated Japanese politics during the Heian period (794-1185), along with the Fujiwara, the Tachibana, and the Minamoto.

In 1156, during the Hōgen Rebellion, Taira Kiyomori supported Emperor Go-Shirakawa and established the Taira, along with the Minamoto, as the dominant samurai clans in Kyoto. In 1159, after the Heiji rebellion, Kiyomori banished the Minamoto. With the patronage of the retired sovereign Go-Shirakawa, Kiyomori was able to climb the ranks of government, and gain positions and titles at court for members of his family. In 1167, Kiyomori became the first courtier of a samurai family to be appointed Daijō Daijin, chief minister of the government, the highest official position at court. His unbridled ambition antagonized both his supporters and his enemies, and when he placed his two-year-old grandson Tokuhito on the throne as the Emperor Antoku in 1180, the remaining leaders of the Minamoto clan rose up against the Taira, beginning the Genpei War (Gempei no Sōran) which eventually destroyed the Taira clan and gave the Minamoto supremacy throughout Japan. The story of the Taira clan is told in the Heike Monogatari ("The Tale of the Heike").

During the Heian period, the Emperor Temmu (c. 631–686), who had many children, became concerned that in time the Imperial household would grow to an unmanageable size, and declared that descendants of the emperors in the sixth generation were to be deprived of the rank of prince and instead be given a family name. Observation of this decree began in the time of Kammu (r.782-805). The Taira (or Heike, or Heishi) were descended from Prince Katsurabara (the emperor Kammu's son), whose eldest son Takamune-ō (804-867), was the first to take the name Taira, receiving the kabane of Taira no Ason in 825. Katsurabara's second son, Takami, received permission to give the Taira name to his own son, Takamochi. Takamochi received the name in 889 on the authority of the emperor Uda, and his son Kunika (d.935) settled in Hitachi province. Afterwards, descendants of Emperor Nimmyō, Emperor Montoku, and Emperor Kōkō were also given the surname. The specific hereditary lines from these emperors are referred to by the emperor's posthumous name followed by Heishi, for example, Kammu Heishi.

The Taira were one of the four important clans that dominated Japanese politics during the Heian period (794-1185), along with the Fujiwara, the Tachibana, and the Minamoto. The Kammu Heishi line, founded in 889 by Taira no Takamochi (a great-grandson of the 50th Kammu tenno, reigned 781-806), proved to be the strongest and most dominant line during the late Heian period.

In 935, a grandson of Taira Takamochi, Taira Masakado, petitioned the court for the title of Kebiishi (Commissioner of Government Police), and was refused, perhaps because of his belligerent nature. Angry, he returned to his lands in the Kanto region and began to rebel by attacking his local rivals. He attracted a number of neighboring landowners as his followers, and killed his uncle Kunika and clashed with Taira Sadamori. Emboldened by his successes and the nonchalance of the imperial court in Kyoto, Masakado declared himself emperor, claiming a mandate to do so from the Sun Goddess. This proved a tactical error; it stiffened the opposition of his enemies and gave the court reason to declare him a rebel. Loyalist forces, under the command of Taira Sadamori and Fujiwara Hidesato, first forced Masakado to take a defensive position and then defeated him at the Battle of Kojima, in 940. In the course of the battle Masakado was killed by an arrow, which struck him in the head.

Rise of the Taira Clan

A great-grandson of Heishi Takamochi, Taira no Korihira, moved to Ise Province (now part of Mie Prefecture) and established a major daimyo dynasty there. Masamori, his grandson; and Tadamori, great-grandson, became loyal supporters of the cloistered emperors Shirakawa and Toba, respectively.

The imperial court maintained its influence in the provinces by appointing provincial governors, often selected from the Taira and Minamoto clans, who were given successive appointments in different provinces. This strategy allowed the court some control over the provinces, and prevented the Minamoto and Taira leaders from remaining in one place long enough to form a strong local power base. The Taira and Minamoto nobles were thus familiar with the members of the imperial court. Taira Masamori served as provincial governor in nine different provinces during his career, and as a result his son, Taira Tadamori (1096–1153) became close to the cloistered emperor Shirakawa. Taira Tadamori was given the title of kebiishi and the governorship of Bizen, Harima, and Ise. There he proved himself by suppressing pirates on the Inland Sea, and gradually the Taira power base shifted to the western provinces. Tadamori was rewarded by the emperor with a favored concubine, who soon gave birth to a son, Taira Kiyomori (1115-1181).

Taira Kiyomori became a commander of palace guards in the capital, and, in 1146, was appointed the governor of Aki province, earning a reputation for being decisive. In one famous incident in 1146, one of his men insulted the head priest of Kyoto's Gion Shrine, prompting a large group of warrior monks to march on the city and demand Kiyomori's chastisement. Kiyomori rode out to meet them and shot an arrow into their mikoshi (portable shrine), a shocking act of sacrilege that succeeded in dispersing the monks.

After the death of Taira no Tadamori in 1153, Taira no Kiyomori assumed control of the Taira and ambitiously entered the political arena. In 1156, a power struggle erupted between Cloistered Emperor Sutoku and his younger brother, the reigning Emperor Go-Shirakawa. Sutoku attempted to take the throne with the support of the Minamoto warrior clan, under the leadership of Minamoto Tameyoshi. During the bloody and bitter conflict which followed, known as the Hōgen Rebellion, Taira Kiyomori supported Emperor Go-Shirakawa and eventually prevailed, after Minamoto Tameyoshi’s son, Yoshitomo defected to the Taira side. This victory established the Taira and Minamoto samurai clans as the top warrior clans in Kyoto.

However, the two clans entered into a bitter rivalry that culminated three years later during the Heiji Rebellion of 1159. During the winter of 1159, dissatisfied with the rewards he had received for his role in the Hōgen victory, Minamoto Yoshimoto took advantage of Taira Kiyomori’s absence from the capital to seize power and capture the cloistered Emperor Go-Shirakaawa and the Emperor Nijô, precipitating the Heiji Disturbance. Caught off-guard, Kiyomori mustered his forces and used a series of clever maneuvers to overpower the Minamoto and liberate Go-Shirakaawa and Nijô. He attacked the Minamoto headquarters in Kyoto, forcing Yoshitomo to flee eastward to Owari province, where he was murdered in his bath by supporters of the Taira. Kiyomori eliminated the remaining members of the Minamomoto clan, but at the request of his wife, showed mercy and exiled Yoshitomo's three youngest sons Yoritomo, Minamoto no Noriyori, and Yoshitsune.

As the head of the sole remaining warrior clan in Kyoto, Kiyomori was in a unique position to manipulate the court rivalry between the retired sovereign Go-Shirakawa and his son, Nijo tenno (sovereign). With the patronage of the retired sovereign Go-Shirakawa, Kiyomori was able to climb the ranks of government, and to gain positions and titles at court for members of his family. In 1167, Kiyomori became the first courtier of a samurai family to be appointed Daijō Daijin, chief minister of the government, the highest official position at court and the administrator of the imperial government. Many of the courtiers from traditional (non-samurai) noble families were displeased with Kiyomori's attainment of the rank of Daijō-daijin and with his arrogance and the way in which he manipulated the emperor to place members of his family in high positions. In 1171, Kiyomori arranged a marriage between the Emperor Takakura and his daughter Tokuko. Their first son, Prince Tokihito was born in 1178. The next year, in 1179, Kiyomori staged a coup d'etat, forcing the resignation of his rivals from all government posts and subsequently banishing them. He then filled the open government positions with his allies and relatives, and imprisoned Cloistered Emperor Go-Shirakawa. Finally, in 1180 Kiyomori forced the emperor Takakura to abdicate, and placed his two-year-old grandson Tokuhito on the throne as the Emperor Antoku.

Decline of the Taira

Many of Kiyomori’s allies were angered by his displays of power, and most of the provincial samurai, even members of his own clan, turned against him. In the middle of 1180, Prince Mochihito, brother of Emperor Takakura, called on Kiyomori's old rivals, the Minamoto clan, to rise against the Taira, beginning the Genpei War (Gempei no Sōran). The initial uprising was crushed, but the Minamoto eventually gained supremacy throughout Japan. Kiyomori died from an illness early in 1181. Kiyomori's sons, the last of heirs of the Kanmu Heishi line, were eventually destroyed by the armies of Minamoto no Yoritomo in 1185, at the Battle of Dan-no-ura, the last battle of the Gempei War. The remaining members of the Heike Clan fled to the area known as Yunishigawa Onsen (Yunishigawa Hot Spring) in Tochigi Prefecture, and re-established themselves there. This story is told in the Heike Monogatari. ("The Tale of the Heike").

This Kammu Heishi had many branch families including the Hōjō, Chiba, Miura, and Hatakeyama clans. Another Kammu Heishi: Takamune-ō (804-867), the eldest son of Kazurahara-Shinnō (786-853) and a grandson of Emperor Kammu, received the kabane of Taira no Ason in 825. Thus there were two Kammu Heishi families, one descended from Takamune and the other from his nephew, Takamochi (son of Prince Takami).

Retrieved from https://www.newworldencyclopedia.org/p/index.php?title=Heike&oldid=1097685
Categories:
Hidden category:
This page was last edited on 25 January 2023, at 15:14.
Content is available under Creative Commons Attribution/Share-Alike License; additional terms may apply. See Terms of Use for details.