Kamakura (Japanese: 鎌倉市; -shi) is a city located in Kanagawa, Japan, about 31 miles (50 km) south-south-west of Tokyo (to which it is linked by the Yokosuka Railway Line to Yokosuka, Kanagawa). Minamoto no Yoritomo established the first Bakufu (shognate) in Kamakura in twelveth centry, and moved his political center from Kyoto to Kamakura. After the shift, new Buddhist movements emerged and Buddhist culture flourished. Many of Kamakura's 65 temples and 19 shrines were established during Kamakura period. In 1333, Emperor Go-Daigo re-established power in Kyoto, but until it vanished into anonymity in the late fifteenth century, Kamakura retained its status as an important religious, cultural, political, and military center.

Kamakura remained a religious destination for pilgrimages because of its grand temples; in the last century, it has become a tourist destination and an attractive residential area because of its historical and cultural environment and its proximity to Tokyo. Kamakura has a beach which, in combination with the temples, makes it an ideal site for tourism. Kamakura is also noted for its "senbei," which are crisp rice cakes, grilled and sold fresh along the main shopping street. These are popular with tourists, especially Japanese tourists. The city is well-provided with restaurants and other tourist-oriented amenities. 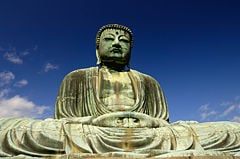 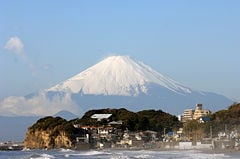 View of Mt. Fuji from the beaches along Kamakura

Kamakura (Japanese: 鎌倉市; -shi) is a city located in Kanagawa, Japan, about 31 miles (50 km) south-south-west of Tokyo (to which it is linked by the Yokosuka Railway Line to Yokosuka, Kanagawa). Surrounded by mountains on three sides and the open water of Sagami Bay on the fourth, Kamakura is a natural fortress, only one hour’s train ride south of Tokyo. Many of the 65 temples and 19 shrines were established around eight centuries ago, when, for a short period, Kamakura was Japan’s political and military hub (Dodd and Richmond 2001, 218).

As of January, 2007, the city has an estimated population of 172,877.[1] The total area of Kamakura is 25 mi² (39.53 km²) with a circumference of 22 miles (35.30 km).[2] The city flower is the Gentian, a purple flower with leaves resembling those found on bamboo grass; and the city tree is a wild cherry tree.[3] The City Emblem, established November 3, 1952, is the “sasarindou,” a crest design with bamboo grass leaves and gentian flowers.[4] Kamakura is noted for its "senbei," which are crisp rice cakes, grilled and sold fresh along the main shopping street. These are very popular with tourists, especially Japanese tourists. Kamakura is famous for a biscuit called Hatosabure, a biscuit shaped like a pigeon. It is sold next to Kamakura station and a very popular omiyage (souvenir) among the Japanese. Kamakura has a beach which, in combination with the temples makes it an ideal tourist location. The city is well-provided with restaurants and other tourist-oriented amenities. Kamakura is also the terminal for the Enoshima Electric Railway, locally known as "Eno-den." This traditional narrow gauge railway runs to Fujisawa; to the west, part of the route takes it parallel to the seashore. 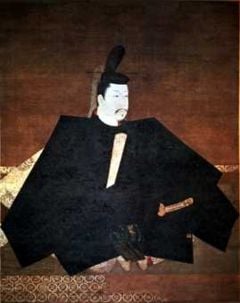 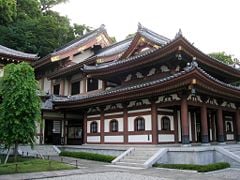 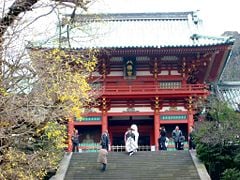 A Japanese traditional wedding ceremony has been organized in Tsurugaoka Hachiman Shrine. 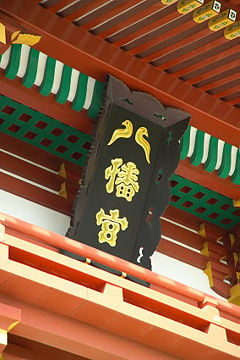 The name of the shrine on a tablet on the gable at Tsurugaoka Hachiman Shrine. 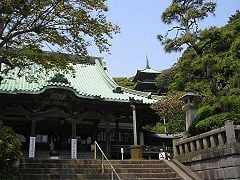 In the Genpei Wars (1180-1185), there was a power struggle between two militaristic clans, the Minamoto (also known as Genji) and the Taira (also known as Heike). Lord Kiyomori of the Taira clan was first to gain power, but spared the lives of the Minamoto brothers, Yoritomo and Yoshitsune. In the Battle of Dannoura (1185), the Minamoto fleet, commanded by Yoshitsune defeated the Taira. There then began a rival between the Minamoto brothers that led to eventually led to the winning brother, Yoritomo, creating his Bafuku (tent government) at Kamakura in 1192 (Dodd and Richmond 2001, 831).

The military aspect of the government was given predominance; military governors worked alongside civil administrators and taxes were imposed to support the military. Semi-feudalism, where peasants were given land to farm in return for loyalty to their local lord, was established throughout Japan. After his death in 1199, Yoritomo’s Bafuku struggled to survive under his descendants who lacked his intense character and organizational skills (Dodd and Richmond 2001, 831).

Over the subsequent century, many majestic monuments were constructed in Kamakura. Monks fleeing the Song dynasty of China founded many Zen temples with the support of the warrior class that “shared similar ideals of single-minded devotion to duty and rigorous self-discipline” (Dodd and Richmond 2001, 220). In 1219, power passed to the Hōjō clan, who administrated as regents behind figurehead shoguns. After the Mongol invasions in the late thirteenth century, the Hōjō clan’s power began to diminish. In 1333, Emperor Go-Daigo re-established power in Kyoto, leaving the last Hōjō regent and 800 retainers to commit seppuku (ritual suicide by disembowelment) (Dodd and Richmond 2001, 220). Before vanishing into anonymity in the late fifteenth century, Kamakura retained its status as an important military center. Kamakura continued to remain a religious destination for pilgrimages because of its grand temples; and in the last century, has turned into a tourist destination and an attractive residential area because of its proximity to Tokyo.

Walking and public transportation are the recommended modes of transportation throughout the city since roads are almost too narrow for out-of-town drivers. Kamakura Station is located in the middle of Kamakura, and the most famous temples and shrines can be found within about a 2-mile radius (3-kilometer radius).

Retrieved from https://www.newworldencyclopedia.org/p/index.php?title=Kamakura&oldid=1010559
Categories:
Hidden category:
This page was last edited on 10 April 2018, at 19:10.
Content is available under Creative Commons Attribution/Share-Alike License; additional terms may apply. See Terms of Use for details.