Josef Suk (January 4, 1874 – May 29, 1935) was a Czech composer and violinist who achieved great fame as a leader in the musical art of composing extended harmonies. In creating extended harmonies with more complex tonal movements leading towards atonal sounds, Suk balanced the concepts of freedom and responsibility, a freedom from traditional tonal structures with a responsibility in the use of chromatic polyphony and dissonance. His choices of the type of harmonies that he used could color and predispose a listener and musician in their thoughts on atonal music. Such choices become the foundation of a musical maturity and personal responsibility.

Josef Suk was born in Křečovice. He studied at the Prague Conservatory from 1885 to 1892, where he was a pupil of Antonín Dvořák (he married Dvořák's daughter in 1898). He formed the Czech Quartet with three of his fellow students—Suk played second violin with them for most of his life. From 1922 he taught at the Prague Conservatory where his pupils included Bohuslav Martinů and Rudolf Firkušný. He later became the rector of the conservatory. He died in Benešov. 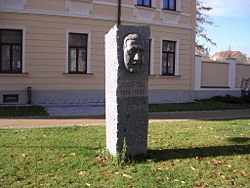 Memorial of Josef Suk in small park in front of the Elementary Art School in Benešov, Czechoslovakia.

Suk's early works show the influence of Antonin Dvořák and Johannes Brahms, while later pieces use more extended harmonies to create a more personal and complex style. These extended harmonies were based on chromatic polyphony with a direction towards rejecting any key framework for the freedom of atonal music. This concentration on dissonance created music which always showed a tension due to the absence of any musical relaxation. Arnold Schoenberg referred to atonal music as not corresponding to the nature of tone; Suk explored this deviation very pointedly. Unlike many of his countrymen, Suk made little use of Czech folk music. His best known works are probably the youthful Serenade for Strings (1892) and the symphony, Asrael (1906), a work written in response to the deaths of his wife and Dvořák. Other pieces include the Fairy Tale Suite (1900), the cycle of piano works Things Lived and Dreamed (1909), and the trilogy of symphonic poems A Summer's Tale (1909), The Ripening (1917) and Epilog (1929, for chorus and orchestra).

He won a silver medal at the Art competitions at the Olympic Games during the 1932 Summer Olympics in Los Angeles, California with his work Into a New Life.

Suk was the grandfather of the violinist Josef Suk.

Josef Suk lived at a time of great impressionism and symbolism in music, painting, and poetry. His works became a bridge between a harmonious order in the nationalism of nineteenth-century music and the atonality of the twentieth century. Suk tried to express the emotions of an age of musical diversity during this period preceding World War I, and his experimentation with music without a key helped to support composers such as Arnold Schoenberg's point of departure from a harmonious order to a musical emancipation.

Retrieved from https://www.newworldencyclopedia.org/p/index.php?title=Josef_Suk_(composer)&oldid=999214
Categories:
Hidden category:
This page was last edited on 10 September 2016, at 16:38.
Content is available under Creative Commons Attribution/Share-Alike License; additional terms may apply. See Terms of Use for details.