John Smyth (1570 – c. August 28, 1612) was co-founder, with Thomas Helwys of the modern Baptist denomination, Ordained as an Anglican Priest, he soon identified with the Separatists who opposed State control of the Church, and became pastor of the Independent or Congregational Church in Gainsborough, where he had attended the Grammar School. In 1608, he led forty of his followers to Amsterdam following persecution in England where, together with Thomas Helwys he formed the first Baptist congregation. Having first baptized himself, he then baptized the rest of the congregation. Later, when he encountered the Mennonites who already practiced believer's baptism (baptism following a mature confession of Christian faith), he was troubled by his actions, and identified himself with the Mennonites. Through his relationship with the Puritan leader, John Robinson Smyth exercised some influence on the Pilgrim Fathers who shared his opposition to the concept of an Established, or state-controlled church. Smyth did not leave behind him as sophisticated a theological legacy as did a Martin Luther or a John Wesley, both of whom founded Protestant denominations but he did significantly contribute to the development of baptist polity, and can be considered as co-founder of a major church tradition that is now spread across the world.

Smyth was born in Lincolnshire in 1570, and educated locally at the grammar school in Gainsborough. He studied at Christ's College, Cambridge and was a Fellow of the College between 1594 and 1598. In 1600 he was appointed City Preacher of Lincoln but was deposed because of his "dangerous preaching."[1]

Smyth was ordained as an Anglican priest in 1594 in England. Soon after his ordination, he broke with the Church of England and became a Separatist. By 1602, he had left the Church of England to pastor the Independent congregation at Gainsborough, which numbered between 60 and 70 members.[2] According to some accounts, he was imprisoned shortly after his ordination for having departed from Anglican doctrine.[3] With John Robinson, the Puritan pastor whose congregation included many of the Pilgrim Fathers who traveled on the Mayflower to the American colonies in 1620, Smythe led the Separatist movement in Nottingham until 1608, when following a clamp down on Separatism by the Ecclesiastical High Court, he and Robinson took some 40 of their followers to Amsterdam.[4] One characteristic of Smyth's polity which later Baptists emulated was his refusal to use a translation of the Bible in worship. Rather, he would translate spontaneously from the Biblical languages. 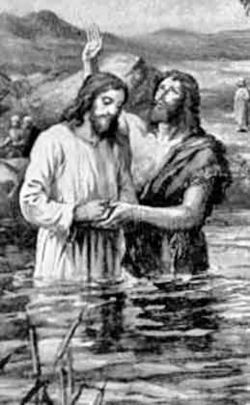 Baptists were named for their practice of adult baptism.

In Amsterdam in 1608, Smyth came to believe in believer's baptism (as opposed to infant baptism) and with his followers formed the first Baptist church. Thomas Helwys, a prominent member of the Gainsborough church and an attorney-at-law, was co-leader of this emigree congregation. Since he did not consider anyone baptized as an infant to be qualified to adminster believer's baptism, that is, baptism following a mature confession of faith in Jesus Christ Smythe first baptized himself, then Helwys and the rest of the congregation. Subsequently, he was known as the 'se-baptist', or 'self-batized'.

In the beginning, Smyth was closely aligned with his Anglican heritage. As time passed, his views evolved.

First, Smyth insisted that true worship was from the heart and that any form of reading from a book in worship was an invention of sinful man. Beale says that, "Reacting to the use of the Book of Common Prayer, Smyth insisted that not only prayer but preaching and even the singing of psalms must be totally spontaneous."[5] This rejection of liturgy remains strong among many Baptists still today. Prayer, singing and preaching had to be completely spontaneous. He went so far with this mentality that he would not allow the reading of the Bible during worship “since he regarded English translations of Scripture as something less than the direct word of God.”

Second, Smyth introduced a twofold church leadership, that of pastor and deacon. This was in contrast to the Reformational trifold leadership of Pastor-Elder, Lay-Elders, and Deacons.

Third, with his newfound position on baptism, a whole new concern arose for these “Baptists.” Having been baptized as infants, they all realized that they would have to be re-baptized. Since there was no other minister to administer baptism, Smyth baptized himself and then proceeded to baptize his flock.

This brought about a separation between Smyth and a group led by Thomas Helwys. Helwys did not affiliate with the Mennonites but led his followers back to England to form the first Baptist congregation on English soil in 1611-12. However, Helwys and his followers continued to correspond with Mennonites, thus early Baptists and the Anabaptist Mennonites enjoyed an historical link. The churches that descended from Smyth and Helwys were of the General Baptist persuasion, preaching an Armenian theology that taught that all people can be saved. Smyth, under Mennonite influence, rejected the notion of original sin and was actually excommunicated by his own congregation. He was accused of Pelagianism, that is, of believing that salvation can be achieved by good works.[6] He set out his own beliefs in his 1609 "Short Confession of Faith in 20 Articles."[7] Smyth died from tuberculosis in 1612. He did not therefore live to see the formal merger of his congregation with the Mennonites, which took place on January 21, 1615.

Smyth's insistence on the separation of church and state may well have influenced some of the Pilgrims who sort refuge and the freedom to practice their religion without interference in the American colonies. His identification with the Mennonites has led to continued debate about whether Baptists share historical roots with the Anabaptists or are different, distinct and unrelated traditions. There is an increased tendency in Baptist educational institutions to claim a link with Mennonites and several have chairs in Mennonite or in Anabaptist studies.[8]