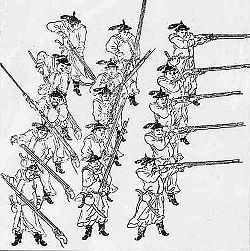 Jiao Yu (Traditional and Simplified Chinese: 焦玉, Wade-Giles: Chiao Yü, Hanyu Pinyin: Jiāo Yù) was a Chinese military officer loyal to Zhu Yuanzhang (1328-1398 C.E.), the founder of the Ming Dynasty (1368-1644 C.E.). He was entrusted by Emperor Hongwu (洪武) as a leading artillery officer for the rebel army that overthrew the Mongol Yuan Dynasty, and established the Ming Dynasty. As a senior advisor and general, he was later appointed to the venerable and noble status of the Count of Dongning.

Jiao Yu, together with Liu Ji (Traditional Chinese: 劉基; Simplified Chinese: 刘基; Wade-Giles: Liu Chi, pinyin: Liú Jī, July 1, 1311-May 16, 1375), edited and wrote Huolongjing, a famous military treatise that outlined the use of Chinese military technology during the from as far back as his military campaign of 1355 C.E. to mid 14th century. Descriptions of advanced gunpowder weapons in his treatise extended back to the Song Dynasty (960-1279 C.E.) in battles against the Khitans, Jurchens and Mongols. In his Huolongjing, he described the fire arrow, fire lance, the early grenade, firearm, matchlocks, bombard, cannon, exploding cannonballs, land mine, naval mine, rocket, rocket launcher, two-stage rockets, and use of various gunpowder solutions that included poisonous concoctions. Huolongjing is one of the key resources for the history of military technology around fourteenth century China. By the fifteenth century, however, European innovations in firearms surpassed China. 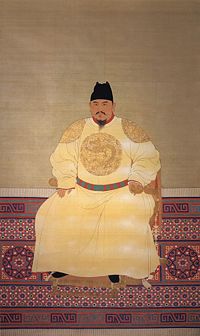 A portrait of the Hongwu Emperor, founder of the Ming Dynasty, whose many loyal officers included Jiao Yu.

In his youth, Jiao was an aspiring Confucian scholar, although his studies would not secure a great political future, since the ruling Mongols had restricted the amount of Chinese accepted into their governmental administration. Before Jiao Yu took up the cause against the ruling Mongols over China, he had met an adept Daoist intellect living in the Tiantai Mountains known as Chichi Daoren (the "Knowing-when-to-stop Daoist").[1] Like Jiao Yu, Daoren accepted the Confucian teachings of Confucius and Mencius, but in military affairs Jiao was convinced that he had inherited the skill of the ancient Sun Tzu.[1] After Jiao Yu became his protege, Daoren urged Yu to join the cause of Zhu Yuanzhang's rebellion.[2] Daoren had also shared with him various literary works on 'fire-weapons' and their recorded uses in battle.[2] After joining his ranks, Jiao Yu became one of Zhu Yuanzhang's trusted confidants in the Red Turban Rebellion against the ruling Mongols of Yuan Dynasty China. Zhu was impressed with Jiao's designs of firearms, the knowledge of which he had earlier acquired from Daoren. Zhu Yuanzhang ordered his officer Xu Da to provide a demonstration of their destructive capability, and after the display Zhu Yuanzhang was most impressed with their power.[2]

With the aid of Jiao's 'fire-weapons', Zhu's army (once stationed in Hezhou amongst a plethora of different rebel groups in surrounding towns) conquered Jingzhou and Xiangzhou in one expedition, in the second expedition the provinces of Jiang and Zhe, and in the third campaign the entire province of Fujian was taken, including its surrounding waterways.[3] After this, Zhu's army captured the whole of the Shandong province in one campaign, strengthening his base while the authority of the Mongol regime at Beijing was collapsing.[3] Zhu Yuanzhang finally drove the Mongols north in 1367, establishing a new capital at Nanjing soon after (while Beijing remained the secondary capital).

After the successful rebellion and establishment of Zhu as China's new Hongwu Emperor, Jiao was put in charge of manufacturing firearms for the government.[2] Jiao was eventually appointed head officer in charge of the enormous Shen Zhi Ying Armory, where multitudes of manufactured guns and artillery were deposited for storage and safekeeping.[2] Proper maintenance and safety measures for gunpowder arsenals were taken very seriously by the Chinese during Jiao's time since previous disasters occurred during the Song Dynasty, with Prime Minister Zhao Nanchong's personal arsenal catching fire and exploding in 1260 C.E.,[4] alongside the monumental disaster of the enormous Weiyang arsenal accidentally catching fire in 1280 C.E. and killing more than 100 people.[5] With Zhu Yuanzhang in power over the government, he established various factories in the capital at Nanjing for the manufacture of gunpowder and fire-weapons, stored in various arsenals throughout the country.[2] The Hongwu Emperor established a new Gunpowder Department in the central administration of the capital.[3] Jiao Yu placed a lot of emphasis on the importance of these fire-weapons, as he once wrote in a preface to his book, "the very existence or destruction of the Empire, and the lives of the whole armed forces depend on the exact timing of these weapons. This is what fire-weapons are all about."[1]

Along with the scholar, general, and court advisor Liu Ji (1311-1375), Jiao Yu was the main editor of the fourteenth century military treatise known as the Huolongjing (Fire Drake Manual), which would include quotations from both editors.[6] The Nanyang publication of the book, known as the Huolongjing Quanzhi (Fire Drake Manual in One Complete Volume) featured a preface written by Jiao Yu much later in 1412 C.E. Both publications falsely attributed the earliest passages of the book to the ancient Chinese Prime Minister Zhuge Liang (181-234 C.E.) of the Shu Kingdom,[6] even though gunpowder warfare did not exist in China until the advent of the gunpowder-fuse-ignited flamethrower (Pen Huo Qi) in the 10th century.[7] In any case, the oldest passages found in the Huolongjing were made no earlier than circa 1270 C.E.[8]

Although Jiao Yu's biography does not appear in the official Ming historical text of the Ming Shi (1739), Yu was mentioned in Zhao Shizhen's book Shenqipu (1598 C.E.), He Rubin's book Binglu (1606 C.E.), and Jiao Xu's book Zekelu (1643 C.E.).[2] His text of the Huolongjing was also reprinted in the nineteenth century, during the late Qing Dynasty.[6]

The phalanx-charging fire-gourd, one of many fire lance types discharging lead pellets in the gunpowder blast, an illustration from the Huolongjing. 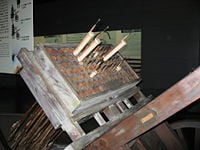 A drawn illustration of a naval mine and page description from the Huolongjing.

A small bronze cannon dated to the Ming Dynasty, on display at Beijing's Capital Museum 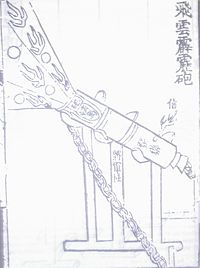 The Huolongjing (Wade-Giles: Huo Lung Ching; Traditional Chinese: 火龍經, rendered by its translator into English as Fire Drake Manual but correctly meaning Fire Dragon Manual) is a fourteenth century military treatise that was compiled and edited by Jiao Yu and Liu Ji of the early Ming Dynasty (1368–1644 C.E.) in China. It outlined the use of various "fire–weapons" involving the use of gunpowder.

The Huolongjing provided info for various gunpowder compositions, including "magic gunpowder," "poison gunpowder," or "blinding and burning gunpowder." It had descriptions of the Chinese hollow cast iron grenade bomb, shrapnel bombs, and bombs with poisonous concoctions.

The book had descriptions of tenth century Chinese fire arrow, a simple wooden arrow with a spherical soft casing attached to the arrow and filled with gunpowder, ignited by a fuse so that it when propelled forward, a light explosion was created on contact. The book explained how this simple "fire arrow" evolved into the metal-tube launched rocket. The advent of the two stage rocket having a booster rocket igniting a swarm of smaller ones that were shot from the mouth of a missile shaped like a dragon, and even fin–mounted winged rockets.

The book described the use of explosive land mines and descriptions of explosive naval mines at sea and on the river; this incorporated the use of a complex trigger mechanism of falling weights, pins, and a steel wheel lock to ignite the train of fuses.

The book described various proto–guns including the fire lance (a short-burst flamethrower that emitted a charge of shrapnel), multiple metal barrel handguns (with up to ten barrels), and descriptions of handguns with possible serpentine locks, used as components in matchlock firearms.

The book provided descriptions of the early bombard and cannon, including the use of hollow gunpowder–packed exploding cannonballs, cannon barrels filled with tons of metal balls containing poisonous gunpowder solutions, and cannons that were mounted on wheeled carriages so that they could be rotated in all directions.

By the fifteenth century, European innovations in firearms, cannons, and other gunpowder weapons began to surpass Chinese innovation. This included the European breech–loading gun and culverin, the wheellock musket, and then the flintlock musket of the mid-seventeenth century. By the late sixteenth century, the Chinese adopted Western-style muskets while employing Ottoman Turkish style firing positions. The book provided information for:

Jiao Yu studied Confucianism and Taoism during his youth, and aspired to become a Confucian scholar in the future. Jiao, however, realized his talent in military strategy and technology. Although historians record various innovations and improvements in firearms, gunpowder, rockets, and others, specific innovations on his part is difficult to trace since military technology was highly classified information. Jian served various military technology positions during Ming Dynasty.

Jiao Yu, together with Liu Ji, edited and wrote Huolongjing (火龍經; Fire Drake Manual), a famous military treatise on Chinese military technology during the mid 14th century. The treatise probably is a compilation of the best military technology at his time, which includes various compositions of gun powder, hollow cast iron grenade bomb, cannons, handguns, rocket launchers, winged rockets with fins, and others. China has a long history of these technologies, and invention of gun powder, for example, can be traced back to as early as Tang Dynasty (618-907).

Jiao's treatise is one of important historical documents that contain information about advanced technology during Mind Dynasty, China.