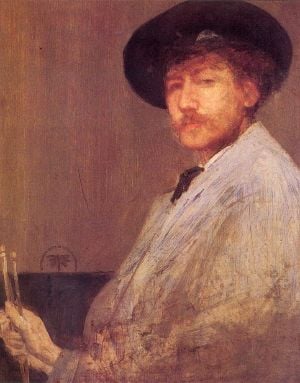 James Abbott McNeill Whistler (July 11, 1834 – July 17, 1903) was an American-born, British-based painter and etcher. Averse to sentimentality in painting, he was a leading proponent of the credo, "art for art's sake," a rejection of the accustomed role of art, which, since the Counter-Reformation of the sixteenth century, had been put in the service of the state or official religion, and later of Victorian-era moralism. It opened the way for artistic freedom of expression in the Impressionist movement and modern art. The slogan continued to be raised in defiance of those, including John Ruskin and the more recent Communist advocates of Socialist realism who thought that the value of art lay in serving some moral or didactic purpose. The concept of “art for art’s sake” continues to be important in contemporary discussions of censorship, and of the nature and significance of art.

Whistler took to signing his paintings with a stylized butterfly, possessing a long stinger for a tail.[1] The symbol was apt, for Whistler's art was characterized by a subtle delicacy, in contrast to his combative public persona.

Whistler was born in Lowell, Massachusetts. The house in which he was born is now preserved as the Whistler House Museum of Art. His father, George Washington Whistler, was invited to Russia in 1842, to build a railroad, and James learned French in school while there. At the Ruskin trial, Whistler claimed Russia as his birthplace: "I shall be born when and where I want, and I do not choose to be born in Lowell," he declared. He also attended the United States Military Academy at West Point for several years. His departure from this academy seems to have been due to a failure in a chemistry exam; as he himself put it later: "If silicon were a gas, I would have been a general one day." In European society, he later presented himself as an impoverished Southern aristocrat, although to what extent he truly sympathized with the Southern cause during the American Civil War remains unclear.

In 1888, Whistler married Beatrix, the widow of E. W. Godwin. The five years of their marriage (before her death from cancer) were very happy.

He was well-known for his biting wit, especially in exchanges with his friend Oscar Wilde. Both were figures in the café society of Paris at the turn of the twentieth century. It was once said that the young Oscar Wilde attended one of Whistler's dinners, and hearing his host make some brilliant remark, Wilde apparently said, "I wish I'd said that." Whistler riposted, "You will, Oscar, you will!"

He is buried at St Nicholas's Church in Chiswick, London. 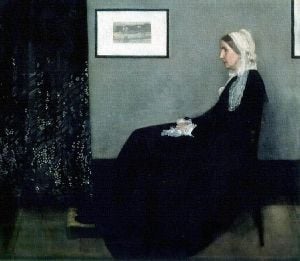 Arrangement in Grey and Black: The Artist's Mother (1871) popularly known as Whistler's Mother

Whistler is best known for the nearly monochromatic full-length figure titled Arrangement in Gray and Black: Portrait of the Artist's Mother, but usually referred to as Whistler's Mother. The painting was purchased by the French government and is housed in the Musée d'Orsay in Paris.

Whistler's painting The White Girl (1862) caused controversy when exhibited in London and, later, at the Salon des Refusés in Paris. The painting epitomizes his theory that art should essentially be concerned with the beautiful arrangement of colors in harmony, not with the accurate portrayal of the natural world. 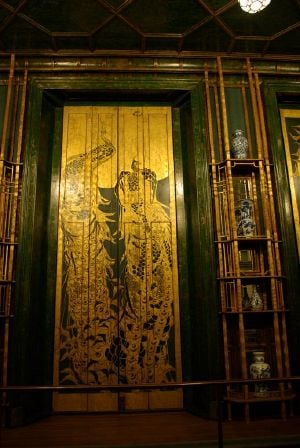 Detail of the Peacock Room

In the 1870s, Whistler painted full length portraits of F.R. Leyland and his wife. Leyland subsequently commissioned the artist to decorate his dining room; the result was Whistler's Harmony in Blue and Gold: The Peacock Room, now in the Freer Gallery of Art. The room was designed and painted in a rich and unified palette of brilliant blue-greens with over-glazing and metallic leaf, and is considered a high example of the Anglo-Japanese style.

Artist and patron quarreled so violently over the room and the proper compensation for the work that their relationship was terminated. The entire room was later purchased by industrialist and aesthete Charles Lang Freer, and installed in his collection. The published communications between Freer and Whistler reveal how Whistler's interest in those collecting his work in his native country (the United States) transitioned over many decades. 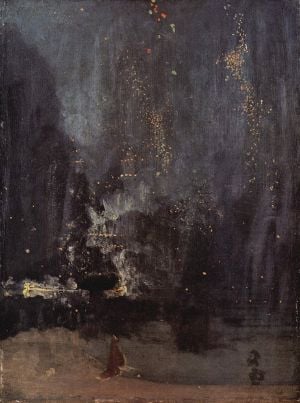 Nocturne in Black and Gold: The Falling Rocket (1874) by James McNeill Whistler

In 1878, Whistler sued the critic John Ruskin for libel after the critic condemned his painting Nocturne in Black and Gold: The Falling Rocket, writing:

For Mr. Whistler's own sake, no less than for the protection of the purchaser, Sir Coutts Lindsay [founder of the Grosvenor Gallery] ought not to have admitted works into the gallery in which the ill-educated conceit of the artist so nearly approached the aspect of willful imposture. I have seen, and heard, much of Cockney impudence before now; but never expected to hear a coxcomb ask two hundred guineas for flinging a pot of paint in the public's face.

Though suing for one thousand pounds plus costs, Whistler won a mere farthing in nominal damages. The cost of the case, together with huge debts from building his residence, "The White House" in Tite Street, Chelsea, (designed with E. W. Godwin, 1877–8) bankrupted him.

Friendly with various French artists, he illustrated the book Les Chauves-Souris with Antonio de La Gandara. He also knew the impressionists, notably Edouard Manet and Edgar Degas, and was a leading figure in the Aesthetic movement. As a young artist, he maintained a close friendship with Dante Gabriel Rossetti, a member of the Pre-Raphaelite Brotherhood.

A supremely gifted engraver, Whistler produced numerous etchings, lithographs, and dry-points. His lithographs, some drawn on stone, others drawn directly on "lithographie" paper, are perhaps half as numerous as his etchings. Some of the lithographs are of figures slightly draped; two or three of the very finest are of Thames subjects—including a "nocturne" at Limehouse; while others depict the Fauburg St Germain in Paris, and Georgian churches in Soho and Bloomsbury in London. The etchings include portraits of family, mistresses, and intimate street scenes in London and Venice.

Whistler achieved worldwide recognition during his lifetime. In 1884, he was elected an honorary member of the Royal Academy of Fine Arts in Munich. In 1892, he was made an officer of the Legion d'Honneur in France and he became a charter member and first president of the International Society of Sculptors, Painters, & Gravers in 1898.

Whistler's influence was significant, and has been the subject of museum exhibitions and publications. A trip to Venice in 1880, to create a series of etchings not only reinvigorated Whistler's finances, but also re-energized the way in which artists and photographers interpreted the city. His tonalism had a profound effect on many American artists, including John Singer Sargent and William Merritt Chase. Famous protégés included Oscar Wilde and impressionist painter Walter Sickert; Whistler fell out with both Wilde and Sickert. He successfully sued Sickert in the 1890s, over a minor legal issue in France. When Wilde was publicly acknowledged to be a homosexual in 1895, Whistler openly mocked him. Whistler had a significant influence upon Arthur Frank Mathews, whom Whistler met in Paris, in the late 1890s. Mathews took Whistler's Tonalism to San Francisco, spawning a broad use of that technique among turn of the century California artists.

Once, after he had suffered a heart attack, a Dutch newspaper incorrectly reported Whistler dead. He wrote to the newspaper, saying that reading his own obituary induced a "tender glow of health."

Whistler published two books which detailed his thoughts on life and art: Ten O'Clock Lecture (1885), and The Gentle Art of Making Enemies (1890). He was, in turn, the subject of a contemporaneous biography by a friend: The printmaker Joseph Pennell collaborated with his wife Elizabeth Robins Pennell to write The Life of James Mcneill Whistler, published in 1908.

Whistler's belief that art should concentrate on the arrangement of colors led many critics to see his work as a precursor to abstract art.

Retrieved from https://www.newworldencyclopedia.org/p/index.php?title=James_McNeill_Whistler&oldid=1009893
Categories:
Hidden category:
This page was last edited on 19 March 2018, at 22:13.
Content is available under Creative Commons Attribution/Share-Alike License; additional terms may apply. See Terms of Use for details.