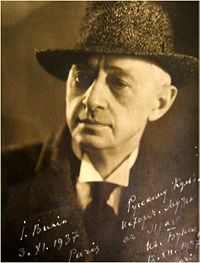 Ivan Alekseyevich Bunin (Ива́н Алексе́евич Бу́нин) (October 22, 1870 – November 8, 1953) was the first Russian writer to win the Nobel Prize for Literature. The texture of his poems and stories, sometimes referred to as "Bunin brocade," is one of the richest in the language. His last book of fiction, The Dark Alleys (1943), is arguably the most widely read twentieth century collection of short stories in Russia. Bunin came to literature through journalism and his attention to detail belies a journalistic background. From the gentry class, he was an early opponent of the Bolsheviks. Forced out of Moscow by the revolution, he worked in Odessa and later abroad. As an outspoken critic of the regime, he became popular and was warmly received by the Russian emigre community.

Bunin was born on his parents' estate in Voronezh province in central Russia. He came from a long line of landed gentry and serf owners, but his grandfather and father had squandered nearly all of the estate.

He was sent to the public school in Yelets in 1881, but had to return home after five years. His brother, who was university educated, encouraged him to read the Russian classics and to write.

At 17, he published his first poem in 1887 in a St. Petersburg literary magazine. His first collection of poems, Listopad (1901), was warmly received by the critics. Although his poems are said to continue the nineteenth century traditions of the Parnassian poets, they are steeped in oriental mysticism and sparkle with striking, carefully chosen epithets. Vladimir Nabokov, who scorned Bunin's prose, was a great admirer of his verse, comparing him with the great symbolist poet, Alexander Blok.

In 1889, he followed his brother to Kharkov, where he became a government clerk, assistant editor of a local paper, librarian, and court statistician. Bunin also began a correspondence with Anton Chekhov, with whom he became close friends. He had a more distant relationship with Maxim Gorky and Leo Tolstoy. He would later write books on both Chekhov and Tolstoy.

In 1891, he published his first short story, "Country Sketch" in a literary journal. As the time went by, he switched from writing poems to short stories. His first acclaimed novellas were "On the Farm," "The News From Home," "To the Edge of the World," "Antonov Apples," and "The Gentleman from San Francisco," his most representative piece, which was translated into English by D. H. Lawrence.

Bunin was a well-known translator himself. The best known of his translations is Longfellow's "The Song of Hiawatha" for which Bunin was awarded the Pushkin Prize in 1903. He also translated works of Byron, Tennyson, and Musset. In 1909, he was elected to the Russian Academy. 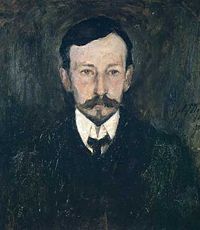 From 1895 on, Bunin divided his time between Moscow and St. Petersburg. He married the daughter of a Greek revolutionary in 1898, but the marriage ended in divorce. Although he remarried in 1907, Bunin's romances with other women continued until his death. His tempestuous private life in emigration is the subject of the internationally acclaimed Russian movie, The Diary of His Wife (2000).

Bunin published his first full-length work, The Village, when he was 40. It was a bleak portrayal of village life, with its stupidity, brutality, and violence. It's harsh realism recalls that of Anton Chekhov. Like Chekhov's "Peasants," Bunin's work is an antidote to the romanticization of the peasants that is found in Russian literature (Tolstoy's peasant-philosopher, Platon Kataev from War and Peace, is a prime example) as well as idealization of the peasant commune in much later nineteenth and early twentieth century Russian social thought. Bunin described the work thusly, "the characters having sunk so far below the average of intelligence as to be scarcely human." The work brought him in touch with Maxim Gorky. Two years later, he published Dry Valley, which was a veiled portrayal of his family.

Before World War I, Bunin traveled in Ceylon, Palestine, Egypt, and Turkey, and these travels left their mark on his writing. He spent the winters from 1912 to 1914 on Capri with Gorky.

Bunin left Moscow after the Russian Revolution of 1917, moving to Odessa. He lived there during the Russian Civil War, leaving Odessa on the last French ship in 1919, settling in Grasse, France. There, he published his diary, The Accursed Days, which voiced his aristocratic aversion to the Bolshevik regime. About the Soviet government he wrote: "What a disgusting gallery of convicts!"

Bunin was much lionized in emigration, where he came to be viewed as the last living link to the lineage of Russian writers in the tradition of Tolstoy and Chekhov. Accordingly, he was the first Russian to win the Nobel Prize for Literature in 1933. On the journey through Germany to accept the prize in Stockholm, he was detained by the Nazis, ostensibly for jewel smuggling, and forced to drink a bottle of castor oil.

Bunin was a strong opponent of the Nazis and reportedly sheltered a Jew in his house in Grasse throughout the occupation. To the end of his life, he remained interested in Soviet literature and even entertained plans of returning to Russia, as Alexander Kuprin had done before. Bunin died of a heart attack in a Paris attic flat, his invaluable book of reminiscences on Chekhov still unfinished. Several years later, his works were allowed to be published in the Soviet Union.

Retrieved from https://www.newworldencyclopedia.org/p/index.php?title=Ivan_Bunin&oldid=1009647
Categories:
Hidden category:
This page was last edited on 10 March 2018, at 23:01.
Content is available under Creative Commons Attribution/Share-Alike License; additional terms may apply. See Terms of Use for details.