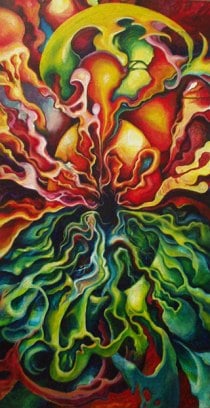 In Hinduism, the term Isvara (ईश्वर in Devanagari script, also variously transliterated as Ishvara and Īśvara), is a generic name for God as well as a philosophical concept denoting one Supreme personal power who rules the cosmos. The term should not be confused with any specific Hindu deity, since it is used interchangeably for God in various Indian languages, along with other terms such as Paramatman and Bhagavan.

In some Hindu schools, the term Isvara is used apologetically to affirm that God is a deeply personal and loving figure rather than a cold, distant, impersonal force.

Isvara is an extrapolation of the Sanskrit verb root īś, meaning to "have power" and may be used interchangeably with terms such as īśa and īśana, all of which can also be translated as "lord" or "possessor of power." Consequently, the word īśvara can be used to denote a "lord" in a temporal sense, such as a master or a king, as well as God. In the theological context, the word Isvara means "the Supreme Lord" (Correspondingly, the feminine "Ishvari" is sometimes used when referring to the Supreme God as a female, particularly in Shaktism.).

The Sanskrit root īś is often used in the Rg Veda to describe the powers of specific deities, indicating their dominion over aspects of the cosmos or natural phenomena. While supreme lordship is not fixed enduringly upon any particular deity, certain gods such as Rudra and Indra are described by the term īśana or "ruling one" in recognition of their exceptional power. In the Atharvaveda Samhita and the Taittiriya Brahmana, Īsana is a title referring specifically to the "lord" or "master" of the universe.

The term īśvara itself first appears in the Atharvaveda Samhita, again designating presiding powers, but also to identify the original cosmic man Purusha, who sacrificed himself and in the process created the universe from his severed parts. This concept of the cosmic monarch is further developed in the Upanishadic texts, particularly the Svetasvatara, with the description of the singular Supreme Lord who spawned the entirety of the cosmos, and who provides liberation to individual souls within it. The terms Isvara, īśa, and īśana are all used to describe this being.

It was in the post-Vedic literature, especially the Bhagavadgita, where the term Isvara took on a meaning which most closely resembles the modern usage of the term. With the introduction of Krishna, the abstract notion of the supreme divine was imbued with highly personal character. This is obvious in the Gita, where Krishna is referred to as bhutanam isvarah, "the lord of all creatures," as well as "the highest person." Further, in this text the soul of each human individual is identified with the supreme self of Krishna, and is said to serve as his or her internal guide. This personalistic notion of God is prescribed to be the ideal focal point for one's personal religious concentration. Thus, Ishvara had come to fill the notion of a transcendent God who is the ground of all existence, as well as a anthropomorphic figure worthy of an individual's unquestioning devotion, as exemplified in bhakti.

Of the six major schools of Hindu philosophy, only two, Samkhya and Mimamsa, do not acknowledge the concept of Isvara. The four remaining schools, Yoga, Vaisheshika, Vedanta, and Nyaya, have each developed their own notion of the concept, though the debate over the nature of Isvara has been most extensive in the Vedanta school.

Advaita Vedanta holds that Isvara is a creation of the limited, finite human mind. Shankara, the founder of Advaita, held that Brahman, the monistic essence of the universe, is the only entity that truly exists, and every other individual thing perceived in the universe is essentially an illusion. Isvara is just another part of this illusion, since it has taken on particular qualities such as personality, motherhood, and fatherhood, among others, which Shankara perceived to be projections of human attributes upon the divine. Perception of such qualities within God, he claimed, is ultimately based on ignorance, or maya. Nevertheless, Advaita Vedanta accepts that acknowledgement of Ishvara may be helpful in aiding individuals toward the divine. However, such dualism between the ultimate Brahman and the human soul (atman) must be overcome if an individual wishes to realize their true nature as indistinguishable from Brahman.

Visistadvaita Vedanta attributes Isvara with more significance when compared to Brahman. Rather than relegating Isvara beneath nirguna Brahman (God without attributes), the innumerable auspicious qualities of Isvara's character are instead celebrated. Isvara is said to be the omniscient, omnipresent, incorporeal, and independent creator of the universe, who actively sustains it as ruler; who will also destroy it. He is causeless, eternal, and unchangeable, and yet He represents the material and the efficient cause of the world. He is both immanent (like whiteness in milk) and transcendent (like a watchmaker independent of a watch). Thus, Ishvara is not merely a human projection, but rather the Supreme Cosmic Spirit who maintains complete control over the Universe and all the sentient beings. Together these beings and the universe form the pan-organistic body of Ishvara. Thus, individual souls are only a part of Isvara and therefore cannot be said to be equivalent to him. The triad of Ishvara along with the universe and the sentient beings is the ultimate Brahman. Ramanuja, the chief proponent of Visistadvaita, most often equated Isvara with Vishnu. According to Ramanuja, the goal of religious activity should be to surrender oneself to Isvara through bhakti.

Unlike the other Vedanta schools, Dvaita ("dualism") Vedanta considers Isvara to be the efficient but not the material cause of the universe. Thus, Isvara exists totally separate from the material world and the sentient beings within it. Drawing upon the teleological argument, Dvaita claims that Isvara's creation alone suggests his irreconcilable transcendence. Isvara's personalistic attributes do not mitigate his supremacy, since each one of His characteristics is fully perfected. Dvaita followers claim that a conception of the divine without such attributes is impractical in the context of everyday worship, and therefore have little use for the concept of the incorporeal, nirguna Brahman. Instead, Isvara alone is the highest form of truth and one must devote themselves unselfishly to this infinite and yet personal being through bhakti if they wish to attain salvation. This viewpoint closely resembles western theism which is the standard among the Abrahamic faiths.

Other orthodox Hindu schools developed their own unique understandings of Isvara. The Raja Yoga school, founded by Patanjali, acknowledges the existence of Isvara, although He is neither the efficient or material cause of the cosmos. Instead, his role is a highly practical one, as he is conceived to be the god who assists yogins in their spiritual activities. Specifically, Isvara serves as an object of concentration for the yogic practitioner. Yogins are to focus upon Isvara as a representation of absolute freedom, where spirit (or purusha) has been freed completely from the fetters of material existence. Devotion to Isvara (or isvarapranidhana) in the school of Yoga, then, is strictly an intellectual and meditative exercise.

Later thinkers in the Nyaya (or "logic") school, in putting forward various logical arguments for the existence of God, arrived at a conception of Isvara which is distinctly theistic in character. Udayana's Nyaya Kusumanjali suggests that God must exist since every effect is produced by a cause, thus the universe itself must also have a cause (see cosmological argument). This was Isvara, the possessor of all the material within creation. According to the Nyaya school, which subscribed to atomism, it is Isvara who joins together atoms in an orderly fashion, and it is Isvara who maintains the world's continual integration. Isvara is considered to be the source of all knowledge, and is credited with authorship of the Vedas, all because His own existence logically explains the existence of each of these aspects of reality. The Nyaya school also suggested that it was Isvara who determines the fruits of human actions, upholding the laws of karma. However, as this entity is not clearly seen in the material world, the Nyaya thinkers considered Isvara to exist outside of it. The Vaisesika school was also atomistic, and in congruence with Nyaya claimed that that the interactions of different types of atoms leading to the creation of new material had to be directed by the will of a higher power, that is, Isvara.

In addition to their belief in the abstract principle of Brahman, most Hindus worship God on a day-to-day basis in personalistic forms. However, these forms are considerably less abstract than the philosophical concept of Isvara. In accordance, the worship of specific deities such as Vishnu, Shiva, or Shakti, among others, as Isvara has become very prevalent. Therefore, modern Hindus conceive of the divine not only as an abstract principle or concept, but also as a personal being, much like God in the Judeo-Christian religions.

Some schools have gone further, elevating the personalistic Ishvara above and beyond the indescribable Brahman. Devotional monotheistic schools of contemporary times, such as Vaishnavism and Shaivism, worship their chosen supreme deities (Vishnu and Shiva respectively) as the one and only Ishvara. Also, contemporary adherents to the tradition Gaudiya Vaishnavism, such as International Society for Krishna Consciousness (ISKCON), hold that Krishna is the supreme personality in the universe, representing the monistic essence of all being, including Brahman.

Retrieved from https://www.newworldencyclopedia.org/p/index.php?title=Isvara&oldid=741562
Categories:
Hidden category:
This page was last edited on 23 June 2008, at 23:44.
Content is available under Creative Commons Attribution/Share-Alike License; additional terms may apply. See Terms of Use for details.