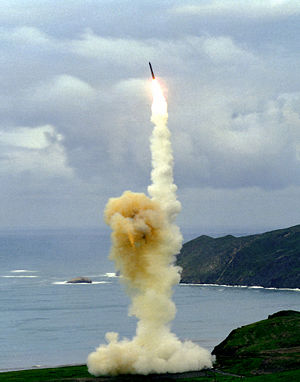 An intercontinental ballistic missile, or ICBM, is a long-range (greater than 5,500 km or 3,500 miles) ballistic missile typically designed for nuclear weapons delivery, that is, delivering one or more nuclear warheads. Due to their great range and firepower, in an all-out nuclear war, submarine and land-based ICBMs would carry most of the destructive force, with nuclear-armed bombers the remainder.

The development of the first two-staged ICBM, A9/10, intended for use in bombing New York and other American cities, was undertaken in Nazi Germany by the team of Wernher von Braun under Projekt Amerika. The ICBM A9/A10 rocket initially was intended to be guided by radio, but was changed to be a piloted craft after the failure of Operation Elster. The second stage of the A9/A10 rocket was tested a few times in January and February 1945. The progenitor of the A9/A10 was the German V-2 rocket, also designed by von Braun and widely used at the end of World War II to bomb British and Belgian cities. All of these rockets used liquid propellants. Following the war, von Braun and other leading German scientists were secretly transferred to the United States to work directly for the U.S. Army through Operation Paperclip, developing the IRBMs, ICBMs, and launchers.

In 1953, the USSR initiated, under the direction of the reactive propulsion engineer Sergey Korolyov, a program to develop an ICBM. Korolyov had constructed the R-1, a copy of the V-2 based on some captured materials, but later developed his own distinct design. This rocket, the R-7, was successfully tested in August 1957 and, on October 4, 1957, placed the first artificial satellite in space, Sputnik.

In the USA, competition between the U.S. armed services meant that each force developed its own ICBM program. The U.S. initiated ICBM research in 1946 with the MX-774. However, its funding was cancelled and only three partially successful launches in 1948, of an intermediate rocket, were ever conducted. In 1951, the U.S. began a new ICBM program called MX-774 and B-65 (later renamed Atlas). The U.S.'s first successful ICBM, the Atlas A, was launched on December 17, 1957, four months after the Soviet R-7 flight.

Military units with deployed ICBMs would first be fielded in 1959, in both the Soviet Union and the United States. The R7 and Atlas both required a large launch facility, making them vulnerable to attack, and could not be kept in a ready state.

These early ICBMs also formed the basis of many space launch systems. Examples include Atlas, Redstone rocket, Titan, R-7, and Proton, which was derived from the earlier ICBMs but never deployed as an ICBM. The Eisenhower administration supported the development of solid-fueled missiles such as the LGM-30 Minuteman, Polaris and Skybolt. Modern ICBMs tend to be smaller than their ancestors, due to increased accuracy and smaller and lighter warheads, and use solid fuels, making them less useful as orbital launch vehicles.

Deployment of these systems was governed by the strategic theory of Mutually Assured Destruction. In the 1950s and 1960s, development began on Anti-Ballistic Missile systems by both the U.S. and USSR; these systems were restricted by the 1972 ABM treaty.

The 1972 SALT treaty froze the number of ICBM launchers of both the USA and the USSR at existing levels, and allowed new submarine-based SLBM launchers only if an equal number of land-based ICBM launchers were dismantled. Subsequent talks, called SALT II, were held from 1972 to 1979 and actually reduced the number of nuclear warheads held by the USA and USSR. SALT II was not ever ratified by the United States Senate, but its terms were nevertheless honored by both sides until 1986, when the Reagan administration "withdrew" after accusing the USSR of violating the pact.

In the 1980s, President Ronald Reagan launched the Strategic Defense Initiative as well as the MX and Midgetman ICBM programs.

In 1991, the United States and the Soviet Union agreed in the START I treaty to reduce their deployed ICBMs and attributed warheads.

India is reported to be developing a new variant of the Agni missile, called the Agni 4, which is reported to have a strike range of 6,000 km.[1] There have also been speculations that India is developing another class of ICBMs called the Surya. No credible sources however can confirm if the 'Surya' program actually exists.

It is speculated by some intelligence agencies that North Korea is developing an ICBM;[2] two tests of somewhat different developmental missiles in 1998 and 2006 were not fully successful.[3]

Most countries in the early stages of developing ICBMs have used liquid propellants, with the known exceptions being the planned South African RSA-4 ICBM and the now in service Israeli Jericho 3.[4]

The following flight phases can be distinguished: 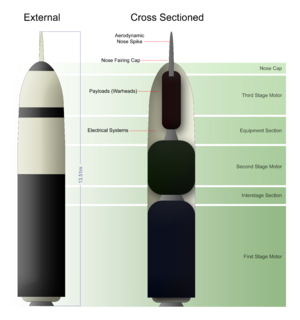 Modern ICBMs typically carry multiple independently targetable reentry vehicles (MIRVs), each of which carries a separate nuclear warhead, allowing a single missile to hit multiple targets. MIRV was an outgrowth of the rapidly shrinking size and weight of modern warheads and the Strategic Arms Limitation Treaties which imposed limitations on the number of launch vehicles (SALT I and SALT II). It has also proved to be an "easy answer" to proposed deployments of ABM systems – it is far less expensive to add more warheads to an existing missile system than to build an ABM system capable of shooting down the additional warheads; hence, most ABM system proposals have been judged to be impractical. The first operational ABM systems were deployed in the 1970s, the U.S. Safeguard ABM facility was located in North Dakota and was operational from 1975–1976. The USSR deployed its Galosh ABM system around Moscow in the 1970s, which remains in service. Israel deployed a national ABM system based on the Arrow missile in 1998,[5] but it is mainly designed to intercept shorter-ranged theater ballistic missiles, not ICBMs. The U.S. Alaska-based National Missile Defense system attained initial operational capability in 2004.

ICBMs can be deployed from multiple platforms:

The last three kinds are mobile and therefore hard to find.

During storage, one of the most important features of the missile is its serviceability. One of the key features of the first computer-controlled ICBM, the Minuteman missile, was that it could quickly and easily use its computer to test itself.

In flight, a booster pushes the warhead and then falls away. Most modern boosters are solid-fueled rocket motors, which can be stored easily for long periods of time. Early missiles used liquid-fueled rocket motors. Many liquid-fueled ICBMs could not be kept fuelled all the time as the cryogenic liquid oxygen boiled off and caused ice formation, and therefore fueling the rocket was necessary before launch. This procedure was a source of significant operational delay, and might cause the rockets to be destroyed before they could be used. To resolve this problem the British invented the missile silo that protected the missile from a first strike and also hid fuelling operations underground.

Once the booster falls away, the warhead falls on an unpowered path much like an orbit, except that it hits the earth at some point. Moving in this way is stealthy. No rocket gases or other emissions occur to indicate the missile's position to defenders. Additionally, it is the fastest way to get from one part of the Earth to another. This increases the element of surprise by giving the enemy less time to try to intercept it. The high speed of a ballistic warhead (near 5 miles per second) also makes it difficult to intercept.

As the nuclear warhead reenters the earth's atmosphere its high speed causes friction with the air, leading to a dramatic rise in temperature which would destroy it if it were not shielded in some way. As a result, warhead components are contained within an aluminum honeycomb substructure, sheathed in pyrolytic graphite-epoxy resin composite, with a heat-shield layer on top which comprises of 3-Dimensional Quartz Phenolic.

Accuracy is crucial, because doubling the accuracy decreases the needed warhead energy by a factor of four. Accuracy is limited by the accuracy of the navigation system and the available geophysical information.

Strategic missile systems are thought to use custom integrated circuits designed to calculate navigational differential equations thousands to millions of times per second in order to reduce navigational errors caused by calculation alone. These circuits are usually a network of binary addition circuits that continually recalculate the missile's position. The inputs to the navigation circuit are set by a general purpose computer according to a navigational input schedule loaded into the missile before launch.

One particular weapon developed by the Soviet Union (FOBS) had a partial orbital trajectory, and unlike most ICBMs its target could not be deduced from its orbital flight path. It was decommissioned in compliance with arms control agreements, which address the maximum range of ICBMs and prohibit orbital or fractional-orbital weapons.

Low-flying guided cruise missiles are an alternative to ballistic missiles. 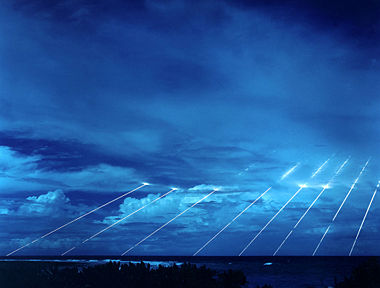 Testing at the Kwajalein Atoll of the Peacekeeper re-entry vehicles, all eight fired from only one missile. Each line, were its warhead live, represents the potential explosive power of about 375 kilotons of TNT.

The U.S. Air Force currently operates 450 ICBMs around three air force bases located primarily in the northern Rocky Mountain states and North Dakota. These are of the LGM-30 Minuteman III ICBM variant only. Peacekeeper missiles were phased out in 2005.[6]

All USAF Minuteman II missiles have been destroyed in accordance with START, and their launch silos have been sealed or sold to the public. To comply with the START II most U.S. multiple independently targetable reentry vehicles, or MIRVs, have been eliminated and replaced with single warhead missiles. However, since the abandonment of the START II treaty, the U.S. is said to be considering retaining 800 warheads on 450 missiles.

MIRVed land-based ICBMs are considered destabilizing because they tend to put a premium on striking first. If we assume that each side has 100 missiles, with 5 warheads each, and further that each side has a 95 percent chance of neutralizing the opponent's missiles in their silos by firing 2 warheads at each silo, then the side that strikes first can reduce the enemy ICBM force from 100 missiles to about 5 by firing 40 missiles at the enemy silos and using the remaining 60 for other targets. This first-strike strategy increases the chance of a nuclear war, so the MIRV weapon system was banned under the START II agreement. 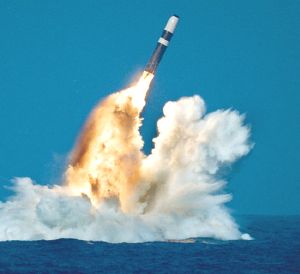 Specific types of Soviet ICBMs include:

France only deploys submarine launched ICBMs, with all land based ones decommissioned

Retrieved from https://www.newworldencyclopedia.org/p/index.php?title=Intercontinental_ballistic_missile&oldid=1009500
Categories:
Hidden category:
This page was last edited on 4 March 2018, at 16:55.
Content is available under Creative Commons Attribution/Share-Alike License; additional terms may apply. See Terms of Use for details.