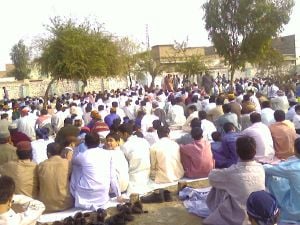 Eid al-Adha (Arabic: عيد الأضحى ‘Īd al-’Aḍḥā) is a religious festival celebrated by Muslims worldwide as a commemoration of Ibrahim's (Abraham's) willingness to sacrifice his son Ismael for Allah, but a voice from heaven allows Ibrahim to sacrifice a goat instead.[1] It is one of two Eid festivals that Muslims celebrate. Like Id al-Fitra, Eid ul-Adha also begins with a short prayer followed by a sermon (khuṭba). Eid al-Adha is four days long and starts on the tenth day of the month of Dhul Hijja (ذو الحجة) of the lunar Islamic calendar. This is the day after the pilgrims in Hajj, the annual pilgrimage to Mecca in Saudi Arabia by Muslims from around the world descend from Mount Arafat. It happens to be approximately 70 days after the end of the month of Ramadan. Like Eid al-Fitr, it is a time when Muslims express solidarity with the whole community, and most of what is killed and cooked is “given to the poor.”[2] The fact that all Muslims participate in the Feast “serves to bind into one celebrating community the whole household of Islam within and beyond its religious center.”[3]

Other names for Eid al-Adha

Eid-ul-Adha (Adha Eid) has other popular names across the Muslim world, such as Eid el-Kibir in Morocco, Algeria, Tunisia, Egypt and Libya; Tfaska Tamoqqart in the Berber language of Jerba; and Tabaski or Tobaski in some parts of Africa; Babbar Sallah in Nigeria and West Africa; Ciidwayneey in Somalia and Somali speaking regions of Kenya and Ethiopia.

In India and Pakistan it is also called Bakra Eid, where the goat is the animal most likely to be sacrificed. In Bangladesh it is called either ঈদ-উল-আজহা Id-ul-Azha or কোরবানী ঈদ Korbani Id. In South Africa it is also called Bakri Eid (or simply Bakrid in India). The Indonesian term is Idul Adha.

In Turkey it is often referred to as the Kurban Bayramı or "Sacrifice Feast." Similarly, in Bosnia and Herzegovina, Albania and Bulgaria it is referred as Kurban Bajram. In Kazakhstan, it is referred to as Qurban Ait. In Kurdish it is called Cejna Qurbanê. In Afghanistan it is called "Eid-e-Qurban" by Dari-speakers and "Loy Akhtar" (literally, "Big Eid") or "Qurbanay Akhtar" by Pashto-speakers. This Eid is for four days. It is also known as the greater Eid (or as Big Eid) because it is a day longer than Eid-ul-Fitr. The killing of the sacrificial animal is preceded by prayers, often outside in order to accommodate the larger numbers of people who attend.

Eid ul-Adha in the Gregorian calendar

Qurbani was offered to deities prior to Islam, and should correctly be called Udhiya. Qurbani is a phrase commonly used in the Indian sub-continent and in Iran.

This is the sacrifice as ordained upon Muslims to be given at the time of Eid al-Adha. Every Muslim adult; male and female—as long as they have the means—are required to offer this sacrifice. The rewards are the same and the benefits include feeding the poor. Costs vary between countries, with the cheapest being around $15 US for one part.

In addition to it being an ordained act Muhammad said that for every hair of a sacrificed animal a person will receive a reward. Traditionally, one third is eaten by the family, one third by friends and one third by the poor. The animals are slaughtered ritually. The throat is cut as Allah name is pronounced, and the blood is then drained from the carcass.

In the Context of the Hajj (pilgrimage)

As this festival marks the end of the pilgrimage and it is celebrated world-wide, it enables all Muslims to identify with those who are on pilgrimage. The whole experience of the hajj is closely linked with the memory of Abraham, who instituted the pilgrimage (Q22: 26-27) and also with Ishmael and Hagar. Described as a friend of God, Abraham is a model of the life of faith and obedience: "Surely Abraham was an example, obedient to Allah, by nature upright, and he was not of the polytheists. He was grateful for Our bounties. We chose him and guided him unto a right path. We gave him good in this world, and in the next he will most surely be among the righteous." (Qur'an 16:120-121).

The ritual slaughter of an animal signifies that just as Abraham was willing to sacrifice what he valued above all, so are Muslims. Distributing meat among people is considered an essential part of the festival during this period, as well as chanting Takbir out loud before the Eid prayer on the first day and after prayers throughout the four days of Eid.

Retrieved from https://www.newworldencyclopedia.org/p/index.php?title=Id_al-Adha&oldid=979941
Categories:
Hidden category:
This page was last edited on 2 April 2014, at 15:06.
Content is available under Creative Commons Attribution/Share-Alike License; additional terms may apply. See Terms of Use for details.