Hugh Capet (c. 940 – October 24, 996) was the first King of France of the eponymous Capetian dynasty from his election to succeed the Carolingian Louis V in 987 until his death. Most historians regard the beginnings of modern France with the coronation of Hugh Capet. This is because, as Count of Paris, he made the city his power center. The monarch began a long process of exerting control of the rest of the country from what became the capital of one of Europe's most powerful and important nations, a major producer of ideas and ideals that have had global impact.

Capet is regarded as the founder of the Capetian dynasty. The direct Capetians, or the House of Capet, ruled France from 987 to 1328; thereafter, the Kingdom was ruled by collateral branches of the dynasty. All French kings through Louis Philippe, and all royal pretenders since then, have belonged to the dynasty. Members of the Capetian dynasty are still the heads of state of the kingdom of Spain (in the person of the Bourbon Juan Carlos) and of the grand-duchy of Luxembourg, making it the oldest continuously reigning dynasty in the world. As one of the founders of what became the French state, Capet's legacy contributed to creating a country that, in many respects, has led the world in the field of humanitarian thinking, rights, political liberty and human solidarity.

The son of Hugh the Great, Duke of France, and Hedwige of Saxony, daughter of the German king Henry the Fowler, Hugh was born about 940. His paternal family, the Robertians, were powerful landowners in the Île-de-France. His grandfather had been King Robert I and his grandmother Beatrice was a Carolingian, a daughter of Herbert I of Vermandois. King Odo was his great uncle and King Rudolph Odo's son-in-law. Hugh was born into a well-connected and powerful family with many ties to the reigning nobility of Europe.[1] But for all this, Hugh's father was never king. When Rudolph died in 936, Hugh the Great organized the return of Louis d'Outremer, son of Charles the Simple, from his exile at the court of Athelstan of England. Hugh's motives are unknown, but it is presumed that he acted to forestall Rudolph's brother and successor as Duke of Burgundy, Hugh the Black from taking the French throne, or to prevent it from falling into the grasping hands of Herbert II of Vermandois or William Longsword, duke of Normandy.[2]

In 956, Hugh inherited his father's estates and became one of the most powerful nobles in the much-reduced West Frankish kingdom. However, as he was not yet an adult, his uncle Bruno, Archbishop of Cologne, acted as regent. Young Hugh's neighbors made the most of the opportunity. Theobald I of Blois, a former vassal of Hugh the Great, took the counties of Chartres and Châteaudun. Further south, on the border of the kingdom, Fulk II of Anjou, another former client of Hugh the Great, carved out a principality at Hugh's expense and that of the Bretons.[3]

The realm in which Hugh died, and of which he would one day be king, bore no resemblance to modern France. Hugh's predecessors did not call themselves rois de France ("Kings of France"), and that title was not used until the time of his distant descendant Philip the Fair (died 1314). Kings ruled as rex Francorum ("King of the Franks") and the lands over which they ruled comprised only a very small part of the former Carolingian Empire. The eastern Frankish lands, the Holy Roman Empire, were ruled by the Ottonian dynasty, represented by Hugh's first cousin Otto II and then by Otto's son, Otto III. The lands south of the river Loire had largely ceased to be part of the West Frankish kingdom in the years after Charles the Simple was deposed in 922. The Duchy of Normandy and the Duchy of Burgundy were largely independent, and Brittany entirely so, although from 956 Burgundy was ruled by Hugh's brothers Odo and Henry.[4]

Election and extent of power

From 977 to 986, Hugh Capet allied himself with the German emperors Otto II and Otto III and with Archbishop Adalberon of Reims to dominate the Carolingian king, Lothair. By 986, he was king in all but name. After Lothair and his son died in early 987, Adalberon and Gerbert of Aurillac convened an assembly of nobles to elect Hugh Capet as their king. In front of an electoral assembly at Senlis, Adalberon gave a stirring oration and pleaded to the nobles:

Crown the Duke. He is most illustrious by his exploits, his nobility, his forces. The throne is not acquired by hereditary right; no one should be raised to it unless distinguished not only for nobility of birth, but for the goodness of his soul.

He was elected and crowned rex Francorum at Noyon in Picardy on July 3, 987, by the prelate of Reims, the first of the Capetian house. Immediately after his coronation, Hugh began to push for the coronation of his son Robert. Hugh's own claimed reason was that he was planning an expedition against the Moorish armies harassing Borrel II of Barcelona, an invasion which never occurred, and that the stability of the country necessitated two kings should he die while on expedition.[5] Ralph Glaber, however, attributes Hugh's request to his old age and inability to control the nobility.[6] Modern scholarship has largely imputed to Hugh the motive of establishing a dynasty against the pretension of electoral power on the part of the aristocracy, but this is not the typical view of contemporaries and even some modern scholars have been less skeptical of Hugh's "plan" to campaign in Spain.[7] Robert was eventually crowned on December 25 that same year. 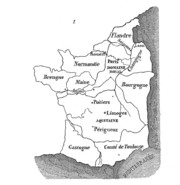 Hugh Capet possessed minor properties near Chartres and Angers. Between Paris and Orléans he possessed towns and estates amounting to approximately 400 square miles (1,000 km²). His authority ended there, and if he dared travel outside his small area, he risked being captured and held for ransom, though, as God's anointed, his life was largely safe. Indeed, there was a plot in 993, masterminded by Adalberon, Bishop of Laon and Odo I of Blois, to deliver Hugh Capet into the custody of Otto III. The plot failed, but the fact that no one was punished illustrates how tenuous his hold on power was. Beyond his power base, in the rest of France, there were still as many codes of law as there were fiefdoms. The "country" operated with 150 different forms of currency and at least a dozen languages. Uniting all this into one cohesive unit was a formidable task and a constant struggle between those who wore the crown of France and its feudal lords. As such, Hugh Capet's reign was marked by numerous power struggles with the vassals on the borders of the Seine and the Loire.

While Hugh Capet's military power was limited and he had to seek military aid from Richard I of Normandy, his unanimous election as king gave him great moral authority and influence. Adémar de Chabannes records, probably apocryphally, that during an argument with the Count of Auvergne, Hugh demanded of him: "Who made you count?" The count riposted: "Who made you king?"[8]

Dispute with the papacy

Hugh made Arnulf Archbishop of Reims in 988, even though Arnulf was the nephew of his bitter rival, Charles of Lorraine. Charles thereupon succeeded in capturing Reims and took the archbishop prisoner. Hugh, however, considered Arnulf a turncoat and demanded his deposition by Pope John XV. The turn of events outran the messages, when Hugh captured both Charles and Arnulf and convoked a synod at Reims in June 991, which obediently deposed Arnulf and chose as his successor Gerbert of Aurillac. These proceedings were repudiated by Rome, although a second synod had ratified the decrees issued at Reims. John XV summoned the French bishops to hold an independent synod outside the King's realm, at Aachen, to reconsider the case. When they refused, he called them to Rome, but they protested that the unsettled conditions en route and in Rome made that impossible. The Pope then sent a legate with instructions to call a council of French and German bishops at Mousson, where only the German bishops appeared, the French being stopped on the way by Hugh and Robert.

Through the exertions of the legate, the deposition of Arnulf was finally pronounced illegal. After Hugh's death, Arnulf was released from his imprisonment and soon restored to all his dignities.

Hugh Capet married Adelaide, daughter of William Towhead, Count of Poitou. Their children are as follows:

A number of other daughters are less reliably attested.[9]

Hugh Capet died on October 24, 996, in Paris and was interred in the Saint Denis Basilica. His son Robert continued to reign.

Most historians regard the beginnings of modern France with the coronation of Hugh Capet. This is because, as Count of Paris, he made the city his power center. The monarch began a long process of exerting control of the rest of the country from there.

He is regarded as the founder of the Capetian dynasty. The direct Capetians, or the House of Capet, ruled France from 987 to 1328; thereafter, the Kingdom was ruled by collateral branches of the dynasty. All French kings through Louis Philippe, and all royal pretenders since then, have belonged to the dynasty. Members of the Capetian dynasty are still the heads of state of the kingdom of Spain (in the person of the Bourbon Juan Carlos) and of the grand-duchy of Luxembourg, making it the oldest continuously reigning dynasty in the world.

Retrieved from https://www.newworldencyclopedia.org/p/index.php?title=Hugh_Capet&oldid=1099195
Categories:
Hidden category:
This page was last edited on 4 February 2023, at 12:17.
Content is available under Creative Commons Attribution/Share-Alike License; additional terms may apply. See Terms of Use for details.