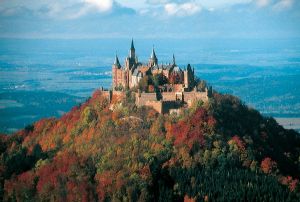 The ancestral home of the House of Hohenzollern, Swabia, Germany.

The House of Hohenzollern is a noble family and royal dynasty of Prince-electors, kings, and emperors of Prussia, Germany, and Romania. It originated in the area around the town of Hechingen in Swabia during the eleventh century. They took their name from their ancestral home, the Burg Hohenzollern castle. The family split into two branches, the Catholic Swabian branch and Protestant Franconian branch. The Swabian branch ruled the area of Hechingen until their eventual extinction in 1869. The Franconian branch was comparatively more successful. Branches within the Franconian branch ascended the throne of Margravate of Brandenburg in 1415 and of the Duchy of Prussia in 1525. The union of these two Franconian branches, in 1618, allowed the creation of the Kingdom of Prussia in 1701, the state which led the unification of Germany and the creation of the German Empire in 1871.

Social unrest at the end of World War I led to the German Revolution of 1918, with the subsequent formation of the Weimar Republic forcing the Hohenzollerns to abdicate, thus bringing an end to the modern German monarchy. A member of the house ruled in Romania until 1947. Known for their love of the military, the Hohenzollern princes and emperors are said to have presided over an army with a country rather than a country with an army. By the end of the nineteenth century, Germany's military capability had one major goal, that of world domination. Any nation that arms with the goal of acquiring world power does so not to defend itself against aggression but to attack other nations. Militarism of this type endangers world peace and security. On the one hand, members of this lineage gave stable government to many people within the European space over a very long period of time. On the other hand, ambition, a dislike of democracy together with unwillingness to change with the times, brought Hohenzollern rule to an end.

Count Frederick III of Zollern was a loyal retainer of the Holy Roman emperors Frederick Barbarossa and Henry VI and about 1185 he married Sophia of Raabs, the daughter of Conrad II, Burgrave of Nuremberg.

After the death of Conrad II, who left no male heirs, Frederick III was granted the burgraviate of Nuremberg in 1192 as burgrave Frederick I of Nuremberg-Zollern. Since then the family name became to be known as Hohenzollern.

After Frederick's death, his sons partitioned the family lands between themselves:

The senior Franconian branch of the House of Hohenzollern was founded by Conrad III, Burgrave of Nuremberg.

Beginning in the sixteenth century, this branch of the family became Protestant and decided on expansion through marriage and a purchase of surrounding lands.

The family were supporters of the rulers from the House of Hohenstaufen and the House of Habsburg of the Holy Roman Empire during the twelfth to fifteenth centuries, by which they were rewarded with several territorial benefits.

In a first phase, the family gradually added to their lands, at first with many small acquisitions in the Franconian and Bavarian regions of Germany:

In a second phase, the family expanded their lands further with large acquisitions in the Brandenburg and Prussian regions of Germany and Poland:

These acquisitions were to eventually propel the Hohenzollerns from a minor German princely family into one of the most important in Europe. 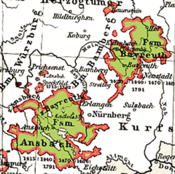 At Frederick V's death on January 21, 1398, his lands were partitioned between his two sons:

On December 2, 1791, Christian II Frederick sold the sovereignty of his principalities to king Frederick William II of Prussia.

On December 2, 1791, Christian II Frederick sold the sovereignty of his principalities to king Frederick William II of Prussia.

The Duchy of Brandenburg-Jägerndorf was purchased in 1523.

The duchy of Brandenburg-Jägerndorf was confiscated by Ferdinand III, Holy Roman Emperor in 1622.

The short-lived Margraviate of Brandenburg-Küstrin (principality) was set up, against the Hohenzollern house laws on succession, as a fief of the House of Hohenzollern, a typical German institution.

In 1788 the title was incorporated into the Kingdom of Prussia.

In 1525 the Duchy of Prussia was established as a fief of the King of Poland.

Prussia region of Germany and Poland.

In 1772, the Duchy of Prussia was elevated to a kingdom. 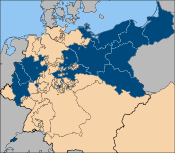 In 1871, the Kingdom of Prussia was a constituting member of the German Empire. 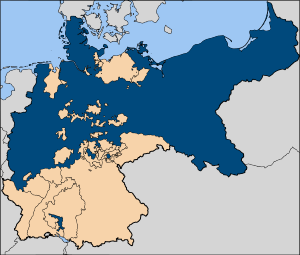 In 1871 the German empire was proclaimed. With the accession of William I to the newly-established imperial German throne, the titles of King of Prussia, Duke of Prussia and Elector of Brandenburg were always attached to the title of German Emperor.

In 1918 the German empire was abolished and replaced by the Weimar Republic. 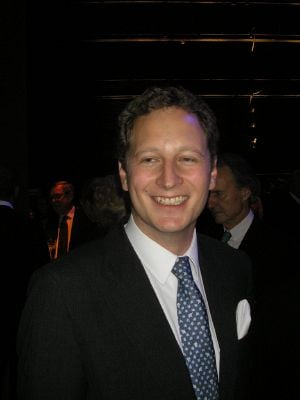 Prince Georg Friedrich head of the House of Hohenzollern

The House of Hohenzollern never relinquished their claims to the thrones of Prussia and the German Empire. At present, the claims are not recognized by the Federal Republic of Germany.

Since the death of William II in 1941, last reigning king and emperor and thereafter head of the House of Hohenzollern, he was succeeded by:

The head of the house is the titular King of Prussia and German Empire. He also bears a historical claim to the title of prince of Orange. Members of this line style themselves princes of Prussia. 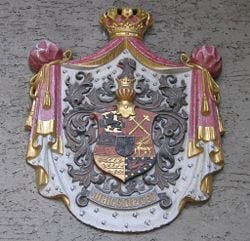 Combined coat of arms of the House of Hohenzollern-Sigmaringen (1849).

The junior Swabian branch of the House of Hohenzollern was founded by Frederick IV, Burgrave of Nuremberg.

They never expanded from these three Swabin principalities, which was one of the reasons they became relatively unimportant in German history for much of their existence. However, they kept royal lineage and married members of the great royal European houses.

The last ruling Prince of Hohenzollern-Sigmaringen, Karl Anton, would later serve as Minister-President of Prussia between 1858 and 1862.

The Hohenzollern-Hechingen finally became extinct in 1869. A descendant of this branch was Sophie Chotek, wife of Archduke Francis Ferdinand of Austria-Este.

However, a member of the Hohenzollern-Sigmaringen family, Charles Eitel, second son of prince Karl Anton, was chosen to become prince of Romania as Charles I in 1866. In 1881, Charles I became the first king of the Romanians.

Charles' older brother, Leopold, was offered the Spanish throne after a revolt removed queen Isabella II in 1870. Although encouraged by Otto von Bismarck to accept it, Leopold backed down once France's Emperor, Napoleon III, stated his objection. Despite this, France still declared war, beginning the Franco-Prussian War.

Charles I had no children of his own, so Leopold's younger son, Ferdinand I, would succeed his uncle as king of the Romanians in 1906, and his descendants continued to rule in Romania until the end of the monarchy in 1947.

Today, this branch is represented only by the last king, Michael, and his daughters. The descendants of Leopold's oldest son William continue to use the titles of prince or princess of Hohenzollern.

The County of Hohenzollern-Haigerloch was established in 1567.

Between 1630 and 1681, the county was temporarily integrated into the Margraviate of Hohenzollern-Sigmaringen.

The County of Hohenzollern-Hechingen was established in 1576.

In 1850, the principality was sold to the Franconian branch of the family and incorporated into the Kingdom of Prussia. The branch became extinct in dynastic line with Konstantin's death in 1869.

The County of Hohenzollern-Sigmaringen was established in 1576.

Kings of the Romanians

The Principality of Romania was established in 1862, after the Ottoman vassal states of Wallachia and Moldavia had been united in 1859, under Alexander John Cuza as Prince of Romania in a personal union.

He was deposed in 1866, by the Romanian parliament which then invited a German prince of the Hohenzollern-Sigmaringen family, Carol, to become the new Prince of Romania.

In 1881, the Principality of Romania was proclaimed a Kingdom.

In 1947, the Kingdom of Romania was abolished and replaced with the People's Republic of Romania.

King Michael has retained his claim on the Romanian throne. At present, the claim is not recognized by Romania, a republic.

The head of the family is styled His Serene Highness The Prince of Hohenzollern.

The princes of the House of Hohenzollern earned a reputation for their military prowess. Frederick William I (1713-1740), the "Soldier King," created Prussia's standing army, which was among the largest and best in Europe. Prussia has been described as not so much a country with an army, but an army with a country.[1] The Hohenzollern princes believed in strong leadership, and developed an efficient and pervasive bureaucracy. As surrounding European nations acquired overseas empires, the Prussian rulers wanted to re-unify the splintered German states to revive the German Empire of the early Middle Ages. Prussia led the process of German unification, and the Prussian Hohenzollern rulers became Emperors.

Elsewhere in Europe, such countries as Great Britain, Sweden and the Netherlands were transforming themselves into constitutional monarchies as authority shifted from kings (and Queens) to elected legislatures. Under Bismarck's Chancellorship, Germany saw the maturation of democratic governance. However, when Bismarck retired in 1890, Kaiser William II took the opportunity to exert much more direct political control. Towards the end of the nineteenth century, his admiration for and jealousy of the British navy led him to commission a massive ship building enterprise to increase German sea-power. Increasingly, the German state was engaged in an armaments race with rival European powers.

As early as 1893, the Kaiser was anticipating the need to be able to fight on two fronts, Western and Eastern, "Our army," he said, "isn't strong enough yet to fight on two fronts." Unless Germany became a "world power," she would cut "a deplorable figure." "World Power," without that, a nation cuts a deplorable figure," he said.[2] This military build-up, combined with William's ambitions for Germany as a world power, all contributed to Germany's role in World War I. William's ambition and his autocratic tendency saw the end of the main branch of the House of Hohenzollern, which had exercised power in some form since 1061. A nation that arms with the goal of acquiring world power does not do so only to defend itself against aggression but intends to be an aggressor. Militarism of this type endangers world peace and security.

It has been suggested that style of Hohenzollern the governance also helped lay a foundation upon which Adolf Hitler—who also believed in strong leadership—could build a system of state terror and totalitarianism. One writer comments:

the militarism of Germany, her ruthlessness and violence, and the principle of absolute obedience to orders, were the legacy of Prussia. Prussianism … was the root of Hitlerism … without the Prussianization of Germany … there would be no Hitler.[3]

On the one hand, rulers of the House of Hohenzollern governed several political entities in Europe over many centuries, which gave political and social stability to these polities and to the lives of their peoples. On the other hand, the dynasty failed to adjust to the new political climate that was sweeping through Europe in the early twentieth century, as "subjects" demanded to be treated as "citizens" with government by, for and of the people. Ludwig describes William II as an autocrat out of touch with his people, who failed to realize that those who appeared to be his friends only supported him "for the sake of their personal advantage.[4]

The family uses the motto Nihil Sine Deo (English: Nothing Without God). The family coat of arms, first adopted in 1192, began as a simple shield quarterly sable and argent. The head and shoulders of a hound were added in 1317 by Frederick IV.[5] Later quartering incorporated other branches of the family.