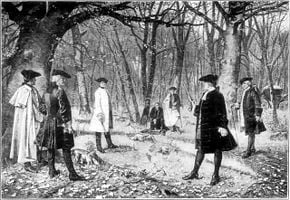 Alexander Hamilton defending his honor by accepting Aaron Burr's challenge to a duel.

In the Judeo-Christian tradition, as well as in Confucianism and other ethical systems, honor is defined as the high respect, esteem, reverence, admiration, or approbation shown, felt toward, or received by a deity or person. The Bible emphasized placing "no other gods" before the true God and honoring one's father and mother, while Confucius taught that one must love others and honor one's parents.

Honor became a guiding principle in Western society, from its earliest beginnings, especially as it relates to a man's honor, his wife's honor, and his family's honor. In the picture at the right, the American patriot Alexander Hamilton is seen defending his honor by accepting Aaron Burr's challenge to a duel. In some Muslim countries, women can be murdered in impunity if they are perceived as having brought dishonor to their family or tribe.

In East Asia, in lands such as Japan, honor was seen as a high duty, especially by the Samurai, and by ordinary people as well.

Honor has been defined in more modern times as the evaluation of a person’s trustworthiness and social status based on an individual's statements and actions. In some cultures, even in today's modern world, people are guided by a culture of honor as opposed to a culture of law.

The ancient Greek concepts of honor (timē) included not only the exaltation of the one receiving honor, but also the shaming of the one overcome by the act of hubris. This concept of honor is akin to a zero-sum game, in which every honor was matched by an equal amount of shame.

In Aristotle's ethics, honor is defined as one of the several virtues that are central to a well-lived life. In order to live well, one must develop an understanding and appreciation of acquiring several important qualities which define a human being. One of those qualities is honor. Aristotle's approach, however, emphasized the importance of reason, more than honor, in order to have a well-lived life. 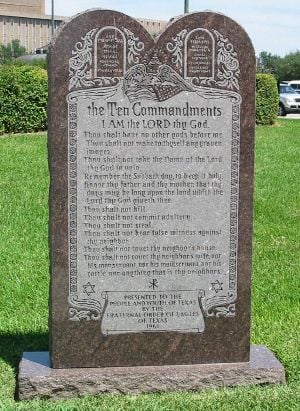 The fifth of the Ten Commandments is "Honor thy father and thy mother."

The honoring of one's father and mother is the fifth commandment in the Ten Commandments. Its importance is apparent from the fact that the declared reward for its observance is the lengthening of "thy days upon the land which the Lord thy God giveth thee" (Ex. 20:12). The rabbis also emphasized that the observer of this commandment would enjoy a reward, both in this world and in the next (Pe'ah 1:1). They equated the honor due to parents with that due to God (Ex. 20:12; Prov. 3:9) since "there are three partners in man, the Holy One blessed be He, the father, and the mother." According to the rabbis, when a man honors his father and his mother, God declares, "I ascribe merit to them as though I had dwelt among them and they had honored Me." (Kid. 30b)

In Catholic tradition, one is obligated to honor those who stand in a position of authority. "Everyone must submit himself to the governing authorities," wrote Saint Paul in Romans 13:1, "for there is no authority except that which God has established. The authorities that exist have been established by God." The most important relationship is between man and God. We must honor God by worshiping Him as our first beginning and last end, who is the infinite source of everything that we have. We honor angels and saints because of the gifts and graces bestowed on them by God. We honor our parents, from whom we received our earthly being, who brought us up and prepared us for the difficulties of life. Spiritual and temporal rules have a valid claim on receiving our honor by reason of the authority over us which they have received from God. We should honor the aged for their presumed wisdom, virtue, and experiences. We should always honor moral worth, wherever we find it. Official Catholic doctrine states that we may honor the highly talented, those who have been endowed with great beauty, strength, and dexterity, the well-born, and even the rich and powerful, for riches and power may, and should, be made the instruments of virtue and well-being.

A staged re-enactment of suppuku, or ritual suicide in Japan, considered an honorable death

Confucius taught that one should love others and to honor one's parents. This would contribute to the establishment of a civilized society and ultimately to world peace. Confucius' ethical teachings influenced the leading circles of China and became widespread through Asia, creating a strong sense of honor as a guiding moral principle.

In East Asia, in lands such as [Japan], honor was seen as an important duty of the Samurai, but also of all people. When a person lost his honor, there was only one way to save his dignity: death. Seppuku (commonly called "harakiri") was the most honorable death in such a situation. The only way for a Samurai to die more honorably was to be killed in a battle. A modern inheritance of the Asian tradition of military honor is the importance of this virtue to people who practice martial arts.

Honor has been defined as the evaluation of a person’s trustworthiness and social status based on an individual's statements and actions. Honor is that which defines a person's character: whether or not the person reflects honesty, respect, integrity, or fairness. Accordingly, a person's value and stature are based on the harmony of their actions, code of honor, and that of the society at large.

Honor can also be analyzed as a relativistic concept, with conflicts between individuals and cultures arising as a consequence of material circumstance and ambition, rather than fundamental differences in absolute ethical principles. Alternatively, it can be viewed as a basic human principle, as real to the human condition as love, and likewise deriving from the formative personal bonds that establish one's personal dignity and character.

Traditionally, in Western society, as in the Orient, honor figured largely as a guiding principle. In the Middle Ages, the culture of chivalry held honor as one of its principle virtues. A man's honor, that of his wife, his family or his beloved, formed an all-important issue: the archetypal "man of honor" remained ever alert for any insult, actual or suspected: for either would impugn his honor. Dueling became a well known tradition in the early modern age of Europe and America for men who felt their honor had been insulted by another, over issues ranging from impugning one's courage or the nobility of one's birth, to questions involving the chastity of one's wife or sister.

The concept of honor has declined in importance in the modern secular West as law has tended to replace honor as a central principle insuring societal order. Popular stereotypes would have honor surviving more definitively in alleged "hot-blooded" cultures (Italian, Persian, Arab, Iberian, etc.) or in more "gentlemanly" societies (like the "Old South" and England). Feudal and other agrarian societies, which focus upon land use and land ownership, may tend to "honor" more than do industrial societies. Honor still prevails in the military (officers may conduct a court of honor) and in organizations with a military ethos, such as Scouting organizations. 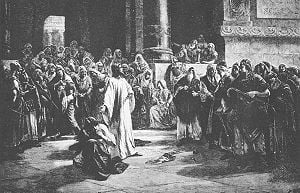 Jesus of Nazareth defends a woman accused of adultery from being stoned to death.

Today, in some Muslim countries women live under the threat of "honor killings." An honor killing is the murder of a person, almost invariably a woman, who has been perceived as having brought dishonor to their family for such simple crimes as being seen talking to a non-relative boy. Even the suspicion of such conduct can result in death. Such killings are typically perpetrated by the victim's own relatives and/or community, and unlike a crime of passion or rage-induced killing, it is usually planned in advance and often with horrific methods. At times the family will goad a young woman to kill herself to avoid being murdered by her family. Suicide bombers in the Middle East have seen women join their ranks at times to restore the honor of a husband or family after the woman has committed adultery. Such killings are often regarded as a "private matter" for the affected family alone, and courts rarely become involved or prosecute the perpetrators. Laws protecting women from honor killing are often absent from certain Arab states.

"Honor" in the case of females is often related to sexuality. Preservation of "honor" is equated primarily to maintenance of virginity of unattached women and to the exclusive monogamy of the remainder. Conceptions of honor vary widely between cultures; in some cultures, honor killing of female members of one's own family are considered to be justified if the individuals have "defiled the family's honor" by marrying against the family's wishes, or even by being the victims of rape. Honor killings sometimes target women who choose boyfriends, lovers, or spouses outside of their family's ethic and/or religious community, or refuse to enter into an arranged marriage or seeking a divorce. 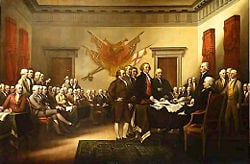 The signers of the Declaration of Independence pledged "our lives, our fortunes, and our sacred honor."

One can contrast cultures of honor with cultures of law. In a culture of law there is a body of laws that must be obeyed by all, with punishments for transgressors. This requires a society that can enact and enforce laws. A culture of law incorporates an unwritten social contract: members of society agree to give up most of their rights to defend themselves and retaliate for injuries, on the understanding that transgressors will be apprehended and punished by society. The culture of honor often dissipates as national governments emerge that are capable of enforcing laws on a nationwide basis.

In the modern world, cultures of honor often appear among the Bedouins, Scottish and English herdsmen, and many similar peoples, who have little allegiance to a [[nation]al [government]]; among cowboys, frontiersmen, and ranchers of the American West, where official law-enforcement often remained out of reach; among the plantation culture of the American South, and among aristocrats, who enjoy hereditary privileges that put them beyond the reach of codes of law. Cultures of honor also flourish in criminal underworlds and gangs, whose members cannot complain to the law when they believe they have been wronged.

In contemporary international relations, the concept of "credibility" resembles that of honor, as when the credibility of a state or of an alliance appears to be at stake, and honor-bound politicians call for drastic measures.

Honor has also been compared to the concepts of integrity, face in stereotyped East Asian cultures, or mana in Polynesian society. Shame, as the opposite of honor, is also an important and ethical concept which affects many cultures.

In some countries the term honor can refer to an award given by the state. Such honors include military medals, but more typically imply a civilian award, such as a British Order of the British Empire (OBE), a knighthood or membership in the French Légion d'honneur.