Harriet Ann Jacobs (1813 - March 7, 1897) was an American abolitionist and writer. Along with Frederick Douglass and Nat Turner, she offered one of the only autobiographical narratives of the slave tradition. In 1861, she published what would be her only book, Incidents in the Life of a Slave Girl, under the pseudonym "Linda Brent."

Her personal narrative stood apart from the majority of slave narratives, as it shed light on the horrors of slavery from a female's perspective and exposed the existence of sexual exploitation at the hands of slave masters.

Harriet was born in Edenton, North Carolina to Daniel Jacobs and Delilah. Her father was a mulatto carpenter and slave owned by Dr. Andrew Knox. Her mother was a mulatto slave owned by John Horniblow, a tavern owner. Harriet inherited the status of both her parents as a slave by birth. She was raised by Delilah until the latter died around 1819. She then was raised by her mother's mistress, Margaret Horniblow, who taught her how to sew, read, and write.

In 1823, Margaret Horniblow died, and Harriet was willed to Horniblow's niece, Mary Matilda Norcom, whose father, Dr. James Norcom, became her new master. She and her brother John went to live with the Norcoms in Edenton. Norcom subjected her to sexual harassment for nearly a decade. He refused to allow her to marry any other man, regardless of status, and pressured her to become his concubine and to live in a small house built for her just outside the town. Attempting to deflect Norcom’s advances, she became involved with a consensual lover, Samuel Sawyer, a free white man and a lawyer who eventually became a Senator. She and Sawyer were parents to two children, Joseph and Louisa Matilda (named Benny and Ellen in the book), also owned by Norcom. Harriet reported that Norcom threatened to sell her children if she refused his sexual advances. She then moved to her grandmother’s house, and was allowed to stay there because Norcom’s jealous wife would no longer allow her to live in the Norcom house.

By 1835, her domestic situation had become unbearable; her lack of cooperation prompted Norcom to send her to work on a plantation in Auburn. Upon finding out that Norcom planned to send her children into labor as well, she decided to escape. She reasoned that with her gone, Norcom would deem her children a nuisance and would sell them. First she found shelter at neighbors’ homes before returning to her grandmother’s house. For nearly seven years, she lived in a small crawlspace in her grandmother's attic, through periods of extreme heat and cold, and she spent the time practicing her reading and writing.

After Norcom sold Harriet's brother John and her two children to a slave trader, Sawyer purchased them and brought them to live with Harriet's grandmother. Sawyer was elected to Congress in 1837, and took John with him during travels in the North. John eventually escaped in 1838. Harriet’s daughter Louisa was summoned to take John’s place, before she was sent to live with Sawyer’s cousins in New York City.

Escape to the North

Aided by the Vigilant Committee, Harriet escaped by boat to Philadelphia, Pennsylvania. She started living as a free woman and later moved to New York City in 1842. She found employment there as a nursemaid. Her most notable employer was the abolitionist Nathaniel Parker Willis. She reunited briefly with her daughter in Brooklyn. When she learned that Norcom planned to come to New York searching for her, she retreated to Boston, where her brother was staying. She made arrangements for her son in Edenton to be sent to Boston, and she soon returned to New York. 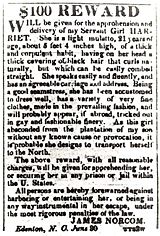 Reward noticed issued for the return of Harriet Jacobs

In October 1844, she revealed to Mary Willis, wife of Nathaniel, that she was an escaped slave. To avoid further endangerment, she and her daughter were granted escape to Boston again, where Harriet briefly worked as a seamstress. The following spring, Mary Willis died, and Harriet returned to Nathaniel Willis to care for his daughter.

By 1849, Harriet had taken residence in Rochester, New York, where much abolitionist work took place. She befriended Amy Post, who suggested she write about her life as a slave. The next year she fled to Massachusetts yet again, after Norcom’s daughter, Mary, and Mary’s husband, Daniel Messmore, attempted to reclaim Harriet and her children, on the basis that Mary had inherited Harriet, and therefore Norcom had no right to sell Jacob’s children. The sale was actually legal, though Harriet did not know this. Two years later, Cornelia Grinnell Willis, the second wife of Nathaniel, acquired freedom for Harriet for the price of $300, paid to Mary Norcom Messmore and Daniel Messmore.

Upon gaining her freedom, Jacobs began preliminary plans for putting her narrative in print. At first, she had hoped that Harriet Beecher Stowe, who had written Uncle Tom’s Cabin, could take her story and write a credible narrative. Amy Post contacted Stowe with information about Jacob’s experiences and to solicit her interest. Though Stowe did express interest, she wanted to use Jacob’s material as a supplement to another project rather than to document Jacobs' narrative by itself. Jacob felt insulted and then betrayed when Stowe shared with Cornelia Willis information of Jacob’s sexual history as a slave, for factual confirmation. After these events transpired, Jacobs resolved to author her narrative herself.

Jacobs was one of many escaped slaves who wrote autobiographical narratives in an effort to shape opinion in the Northern United States on the "peculiar institution" of slavery. Her autobiographical accounts started being published in serial form in the New York Tribune, owned and edited by Horace Greeley. However, her reports of sexual abuse were considered too shocking for the average newspaper reader of the day, and publication ceased before the completion of the narrative. She later found difficulty in selling her completed manuscript.

She eventually managed to sign an agreement with the Thayer and Eldridge publishing house when the African-American author William C. Nell introduced her to the white abolitionist writer L. Maria Child, who agreed to act as her agent and her editor. Early in 1861, Jacobs published Incidents pseudonymously with only Child's name on the title page as editor. The two women would remain in contact for much of their remaining lives. Before the narrative could be published, Thayer and Eldridge declared bankruptcy. The narrative in its final form was published by a Boston, Massachusetts publisher in 1861. In London in 1862, the narrative was published as The Deeper Wrong; Or, Incidents in the Life of a Slave Girl.

The author appealed mainly to Middle class white Christian women in the North, through her descriptions of slavery destroying the virtue of women through harassment and rape.

She criticized the religion of the Southern United States as being un-Christian and as emphasizing the value of money ("If I am going to hell, bury my money with me," says a particularly brutal and uneducated slaveholder). She described another slaveholder in the sentence, "He boasted the name and standing of a Christian, though Satan never had a truer follower." Jacobs argued that these men were not exceptions to the general rule.

Much of Incidents in the Life of a Slave Girl is devoted to the Jacobs' struggle to free her two children after she runs away herself. In one heartrending scene, Linda spends seven years hiding in a tiny space built into her grandmother's barn in order to occasionally see and hear the voices of her children. Jacobs changed the names of all characters in the novel, including her own, to conceal their true identities. Despite documents of authenticity, many have accused the narrative to be based on false accounts. The villainous slave owner "Dr. Flint" was clearly based on her former master, Dr. James Norcom.

Jacobs found employment as a nurse during the American Civil War, and then later offered aid to the relief effort in the South, during postwar Reconstruction. Her literary contributions during this period were letters and reports to newspapers in the North and in England about the relief situation. Her correspondence with Child reveals her enthusiasm over the Emancipation Proclamation of 1862. She felt that her suffering people were finally free.

In her later years, Jacobs was among those who established the National Association of Colored Women in Washington, D.C. She also established The Jacobs Free School, and assisted postwar blacks.[1]In 1870, Jacobs returned to Boston, where she ran a boarding house. In 1878, Jacobs moved Washington, DC with her daughter. She remained there until her death at age 84, on March 7, 1897. She was buried at Mount Auburn Cemetery in Cambridge, Massachusetts.

Initially, the portrait of slavery that Jacobs left behind garnered little attention from critics and scholars, who doubted the accuracy and authorship. Jean Fagan Yellin gathered extensive research to prove Jacob’s authorship in 1981, which she documented in her edition of the narrative, published in 1987. Since then, Incidents in the Life of a Slave Girl has become one of the major works under the slave-narrative genre. Not just prized for its literary achievement, it is among the very few autobiographical accounts of the slave experience.