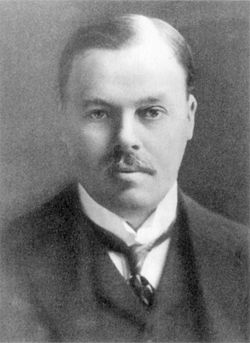 Harold Sidney Harmsworth, 1st Viscount Rothermere (April 26, 1868 – November 26, 1940) was a highly successful British newspaper proprietor, owner of Associated Newspapers and the founder of the Glasgow Daily Record and the Sunday Pictorial. He is known in particular, with his brother Alfred Harmsworth (Lord Northcliffe), for the development of the London Daily Mail and Daily Mirror. Together they pioneered popular journalism in Great Britain, introducing publications aimed to educate and inform the general public, greatly contributing to raising the level of awareness of newsworthy events in the British people, a nation that was a major leader in the world at the time.

Harold Sidney Harmsworth, the son of an indigent English barrister, was born in London, England on April 26, 1868.

He left school early to become a tax clerk, and then a postal clerk. When he was 21, his older brother Alfred Harmsworth persuaded him to join him in his magazine-publishing firm. In 1889, he started to work as the business manager of the Answers to Correspondents paper, the first paper owned by the Harmsworth brothers. Harold had a talent for business, while his brother was a skilled editor; working together they began to build what was to become a successful journalism empire.

The success of Answers to Correspondents newspaper helped the Harmsworths finance the children's paper, Comic Cuts, and a woman's magazine, Forget-Me-Nots. In 1894, they purchased the Evening News, turning it into a prosperous paper. In 1896, they started publishing the Daily Mail, which became one of the most successful papers in the country. It was one of the first newspapers in Britain that was particularly designed for masses. Slogans used to sell the newspaper included "A Penny Newspaper for One Halfpenny" and "The Busy Man's Daily Newspaper."

The Daily Mail reached circulation of 500,000 and during the Boer War in 1899 even over a million. Based on such success, the brothers continued to expand their empire, and purchased the Sunday Dispatch and several other smaller newspapers.

In 1903, the Harmsworth brothers launched the first newspaper aimed at women, the Daily Mirror. Initially, after a rather cold reception, the Harmsworths were forced to change their business strategy. They lowered the price of the paper to a halfpenny, and filled it full of photographs. Within a month, sales had dramatically increased.

In 1910, Harmsworth was made a baronet and in 1914 a baron. He was later raised to the peerage as Viscount Rothermere.

In 1914, Alfred Harmsworth decided to sell his share in the Daily Mirror to Harold. During World War I, the Daily Mirror became the most popular newspaper on the Western Front. It was probable that soldiers liked the papers because it was full of pictures and photographs that showed life back home. Unfortunately, Harmsworth's sons were killed in the war.

After the death of his brother Alfred in 1922, Harold Harmsworth took full control of their newspaper empire. He ran the Evening News, the Sunday Pictorial, the Sunday Dispatch, Daily Mail, as well as the Daily Mirror.

In 1917, Harmsworth was appointed the president of the Air Council in the government of David Lloyd George. He vocally supported the British government.

In 1921, he founded the Anti-Waste League to combat what he saw as excessive government spending.

Harmsworth was an active opponent of communism. In 1924, just four days before the general election, he published an article exposing what became known as the "Zinoviev Letter," which urged British communists to promote revolution. The letter, later discovered to be a forgery, contributed to the defeat of the Labour government in the elections.

Revision of the post-WWI treaties

Harmsworth strongly supported revision of the Treaty of Trianon in favor of Hungary. During the 1920s, he led a campaign to help Hungary regain its land that had been given to Serbia, Romania, and Czechoslovakia as part of the country's punishment for participating in World War I on the side of the aggressors. He became so popular in Hungary that he was offered the Hungarian Crown in 1927. He declined, but purchased estates in Hungary in case Britain should fall to a Soviet invasion. There is a memorial to Harmsworth in Budapest.

In 1934, a Mercury-engine version of the Bristol Type 135 cabin monoplane was ordered by Harmsworth for his own use as part of a campaign to popularize commercial aviation. First flying in 1935, the aircraft caused great interest in Air Ministry circles on account of its top speed of 307 miles per hour being higher than that of any RAF fighter in service. Harmsworth presented the aircraft (named "Britain First") to the nation for evaluation as a bomber, and in early 1936 the modified design was designated Blenheim Mk.I

In later life, Harmsworth became rather conservative and increasingly nationalistic. In 1929, he joined Lord Beaverbrook to form the United Empire Party. He also urged the members of the Conservative Party to replace its leader, Stanley Baldwin, with Beaverbrook.

Harmsworth used his newspaper ownership in attempts to influence British politics, notably being a strong supporter of appeasement towards Nazi Germany, in part—it is thought—because of a shattering experience during the First World War when he had two sons reported killed in the same week. In the 1930s, he argued for increased defense spending while being the owner of the only major newspapers to advocate an alliance with Germany. The Harmsworth papers for a time in 1934 championed the British Union of Fascists (BUF), and were again the only major papers that did so.

Secret British government papers released in 2005 show that Harmsworth wrote to Adolf Hitler congratulating him for the annexation of Czechoslovakia in 1938, and encouraged him to march into Romania. The MI5 papers also show that Harmsworth paid a retainer of £5,000 per year to Stephanie Hohenlohe-Waldenburg-Schillingfurst, a glamorous Austrian princess and German spy, intending that she should bring him closer to Hitler's inner circle. She was known as "London's leading Nazi hostess." The secret services had been monitoring her since she came to Britain in the 1920s and regarded her as "an extremely dangerous person." As World War II loomed, Harmsworth stopped the payments and their relationship deteriorated into threats and lawsuits.

In 1932, Harold Harmsworth retired as chairman of Associated Newspapers, Ltd., turning the management over to his son Esmond. By that time he was among the richest people in Britain. In 1940, Baron Beaverbrook sent Harmsworth on a special war mission to Canada and the United States. Upon the completion of the job, Harmsworth went to Bermuda to take a rest. He died of dropsy in Bermuda at the age of 72.

Harold Harmsworth, together with his brother Alfred (Lord Northcliffe), built one of the most successful journalistic empires in British history and started popular journalism in that country. They founded the Daily Mail, which was the first British paper for the masses. Harmsworth's descendants continue to control the Daily Mail and General Trust Plc.

Retrieved from https://www.newworldencyclopedia.org/p/index.php?title=Harold_Harmsworth&oldid=1097504
Categories:
Hidden category:
This page was last edited on 24 January 2023, at 13:30.
Content is available under Creative Commons Attribution/Share-Alike License; additional terms may apply. See Terms of Use for details.