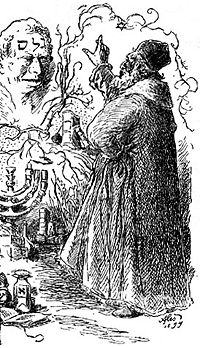 In Jewish folklore, a golem (from the Hebrew "gelem" ((גלם), meaning "raw material") is an animated being created entirely from inanimate matter, and given life through a mystical process involving the secret name of God. The most well-known golem in Jewish folklore was created by Rabbi Yehudah Loew of Prague in 1580 to protect the Jewish people from persecution by Christians. Bringing a golem to life was understood to be a process that only those closest to God, the holiest people who had gained some of God's wisdom and power, could accomplish. However, the life that could be created by any man would always be less than that created by God. Thus, a golem was generally unable to speak, and had no free will, always having to obey its maker.

However, in many tales the golem outgrows his master physically, becoming dangerous both to people and property, and has to be deactivated. The notion of the golem, then, serves to remind us that only God can grant the highest kind of life, that with a soul, and that human beings ought not seek to wield such power.

History of the term

The origins of the golem are often traced back to the Sefer HaYetzira (the "Book of Formation"), a Kabbalistic text that deals with the process of the creation of the universe.[1] The Hebrew word "golem" has been interpreted in multiple ways. The term is used in the Bible (Psalms 139:16), as well as in Talmudic literature to refer to an embryonic or incomplete substance.[2] Commentaries on the Mishnah, specifically the Pirkei avot, use the term to refer to a person whose behavior is unbalanced, or "uncultivated," in contrast to "learned" or "wise" men. The word was incorporated into Yiddish to refer to a person who is stupid, clumsy, or inconsiderate.[3]

References to golems occur as early as the scriptural description of creation; Adam, the first man, is described as having been initially created as a golem. Formed from dust, Adam was a golem, or "shapeless mass," before becoming imbued with a soul.[4]

Like Adam, all golems are created from mud. They were a creation of those who were very holy and close to God, striving to approach God, and in that pursuit gaining some of God's wisdom and power. One of these powers was the creation of life. No matter how holy a person became, however, a being created by that person would be but a shadow of one created by God.

The first known instructions for the creation of a golem are found in commentaries on the Sefer Yetzirah during the twelfth and thirteenth centuries. The creation of a golem was first seen as a initiatory mystical experience. It was not until later that the golem came to be seen chiefly as a servile entity.[5]

The creation of a golem was often viewed as a symbol of holiness, as only the very righteous could be successful at bringing the godly powers into inanimate clay. Persons attempting to create golems for improper or self-serving purposes would not be given the ability to do so.[6] Golems were usually connected with [[rabbi]s during the Middle Ages.

The animation of a golem often involved the use of one of the secret names of God, which were written on a slip of paper and attached to its forehead or arm, or on a clay tablet under the tongue, which could be removed to deactivate the golem. The word Emet (אמת, 'truth' in the Hebrew language) on the forehead was also commonly used to give golems life. By erasing the first letter in Emet to form Met (מת, 'dead' in Hebrew) the golem could be deactivated. In many tales, the golem is said to continue to grow until it dwarfs all members of the household and must be deactivated.

In nearly all versions of golem legends, golems lack the power of speech and are unable to make moral judgments. Since they are created by man, not God, they do not possess a soul, and therefore can do no more than what is asked of them by their creator. In almost all kabbalistic descriptions of golems, they are incapable of disobeying the one who created them. The theme of hubris is common to most golem tales, as with the tale of Rabbi Elias, who created a Golem that grew so large that the rabbi was unable to reach its forehead to erase the letter to deactivate it. The rabbi then commanded the golem to remove his boots, thinking that he would then be able to erase the letter, which worked exactly as planned. Unfortunately, once the golem was deactivated, it returned to clay, which fell upon the poor rabbi, crushing him.[7] This type of hubris theme is common in stories of golems, where the creation of the golem often leads eventually to destruction, similar to the moral found in stories of the monster of Frankenstein.

Having a golem servant was seen as the ultimate symbol of wisdom and holiness, and there are many tales of golems connected to prominent rabbis throughout the Middle Ages.

A sixteenth century rabbi, Elijah of Chelm, is the first person credited with the creation of a golem using a shem, or paper with the name of God written upon it. Similar to the Frankenstein tale, Elijah's golem grew to be a monster. Fearing the destruction of the world at the hands of his golem, the rabbi removed the shem from the golem's forehead, and the golem returned to dust.[8]

The Golem of Prague

The most famous golem narrative involves a sixteenth century rabbi, Rabbi Judah Loew the Maharal of Prague. The story of Loew's golem, written by Wolf Pascheles in 1847, appeared in a collection of Jewish tales entitled Galerie der Sippurim. Other accounts followed later, including the 1909 publication of the legend by Yudl Rosenberg, who was the first to mention the golem as defending Jews from those who would raise the nefarious blood libel (that Jews use human blood in certain of their religious rituals and magical rites) against them. Rosenberg claimed to be publishing an original letter of Loew's, along with a manuscript by Loew's son-in-law.[9] The tale appears in several variations.

According to the legend, the Jews in Prague were being persecuted by the Christians, who often accused them of ritually murdering children so they could use their blood to make matzah bread, an accusation known as "blood libel." Some of their persecutors even sneaked into the Jewish ghetto to deposit the body of a child on the street in an attempt to further incite people against them. Rabbi Loew, always devoted to the welfare of his people, prayed for a vision to tell him how to stop these false accusations, and was told by Heaven to "make a human image of clay." The rabbi took his son-in-law and his favorite student down to the river, and formed the shape of a man from clay. They each walked around the figure seven times, reciting a Kabbalistic formula, and the golem was brought to life. The golem appeared to be a man of thirty, and the Rabbi clothed him and named him Joseph. Through the use of a talisman, the golem could appear invisible, and was sent out to stop anyone carrying a large parcel. When a person was found intending to deposit the body of a dead child in the Jewish streets, the golem would tie up the offender and the evidence, and carry both to the authorities. Once the blood libel was declared to be groundless and persecutions became forbidden, Rabbi Loew removed the breath of life from the golem by walking around the figure seven times, repeating the same words in reverse order.[10]

Other versions of the story involve destruction by the golem. In many versions, the golem becomes uncontrollable, wreaking havoc on the community or the entire city, attacking Jews, Gentiles, and even Rabbi Loew. Many versions also claim that the golem was brought to life through the means of a shem, or piece of paper with a holy and magic word, placed in its mouth, which was subsequently removed to deactivate the golem. Other variations say that the word meaning "truth" was put on the golem's forehead to animate it, and to return the golem to a lump of clay, the first letter was erased, thus spelling "death."

The golem has a variety of powers according to different legends: invisibility, a heated touch, and the ability to summon spirits of the dead to serve as witnesses for the crimes against the Jews. Some versions involve the Emperor of Austria, who initiated the persecution of the Jews, and later beseeched Rabbi Loew to call off his golem. Many legends claim that remnants of the golem can still be found in the attic of the famous Prague synagogue Altneuschul.

The legend of the Prague golem inspired Gustav Meyrink's 1915 novel Der Golem, which in turn inspired Paul Wegener's classic set of expressionistic silent movies, of which The Golem: How He Came Into the World (also released as The Golem, 1920, USA 1921) is particularly famous. Another famous treatment from the same era is H. Leivick's 1921 Yiddish-language "dramatic poem in eight sections" The Golem. Also notable is Julien Duvivier's "Le Golem" (1936), a sequel to the Wegener film. Nobel prize winner Isaac Bashevis Singer also wrote a version of the legend.

The Golem in popular culture

Golem-like creatures appear in the folklore of other cultures. In Norse mythology, for example, Mökkurkálfi (or Mistcalfa) was a clay giant, built to help the troll Hrungnir in a battle with Thor. The concept of golems has also found its way into a wide variety of books, comic books, films, television shows, and games. This use covers a wide range, from "golem" used as an umbrella term to refer to automata and simulacra made of anything from steel to flesh, to full adoptions of the golem mythos.

Golems have appeared in novels such as Neil Gaiman's American Gods, as well as issue #631 of Detective Comics, where Batman must confront a golem created by an elderly Holocaust survivor. The golem has also been featured in film, as well as television shows like the X-files where a young Hasidic woman creates a golem to avenge her husband's murder by neo-Nazis. Golems are also often found in fantasy-based video and role playing games. The golem has even been the subject of opera, with the American opera The Golem by Abraham Ellstein, as well as the opera of the same name by British composer John Casken.