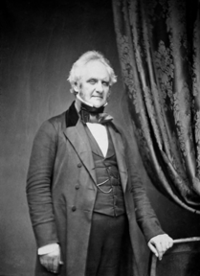 George Peabody (February 18, 1795 – November 4, 1869) was an American entrepreneur, financier and philanthropist. Coming from a lower-middle class family and with little formal education, he partnered in building a successful dry goods business in the United States, and moved into banking and finance. His confidence in the long-term growth of the U.S. guided him as he relocated to London and become the primary conduit for the investment of British capital in the U.S., especially during the Panic of 1837 and the Panic of 1857. Peabody amassed great wealth and used it to become the first great American philanthropist, as he knew first-hand the experience of being poor and poorly educated. He provided subsidized housing in London and founded and supported numerous scientific and educational institutions in Britain and the U.S.

Perhaps his best known philanthropic work in the U.S. is the Peabody Institute in Baltimore, which was the first academy of music to be established in the nation. Under the direction of well-known musicians, composers, conductors, and Peabody alumni, the Institute grew from a local academy to one of the leading music conservatories in the world and an internationally renowned cultural center. It also contains a substantial historical and musical library. Peabody also funded several museums, and established an education fund to promote education in the most destitute portion of the southern U.S. As a permanent resident of London, where his philanthropic work was as substantial as in the U.S., he was greatly honored both in his lifetime and with a funeral at Westminster Abbey. His remains were then returned to his hometown in Massachusetts, renamed Peabody in his honor. As his foundations continue to serve those in need, Peabody's work and name live on in service to others.

George Peabody was born on February 18, 1795, in what was then Danvers, Massachusetts (now Peabody, Massachusetts), to the lower-middle class family of Thomas and Judith (Dodge) Peabody. He had a minimal education and at the age of 11 became an apprentice to a grocer in Danvers. He worked as a merchant until 1812, when he went to serve in the war. There he met Elisha Riggs, who in 1814, provided financial backing for the wholesale dry goods firm of Peabody, Riggs, and Company. In next few years, the partners opened branches in Baltimore, New York City, and Philadelphia.

In 1816, Peabody moved to Baltimore, Maryland, where he lived for the next 20 years. In 1827, he traveled to London to negotiate the sale of American cotton in Lancashire. Next year, after Riggs’ retirement, he became the company’s senior partner.

Peabody realized the dire need for foreign capital in the United States and started a banking business. His firm, George Peabody and Company, specialized in foreign exchange and securities. In 1835, he played an important role in arranging a loan for Maryland, which at the time was on the verge of bankruptcy.

In 1836, Peabody became the president of the Eastern Railroad, one of the first successful railroads in New England. In 1837, he settled permanently in London.

Peabody had a great sense for business. Following the Panic of 1837, while American securities reached a record low and American credit was under attack, his bank bought substantial amounts of depressed securities and provided credit to those in need. In return, once normal economic conditions were restored, he made a great fortune on bonds. He applied the same tactic again during the Panic of 1857.

His bank entered into a partnership with Junius Morgan, father of J. P. Morgan, in 1854. 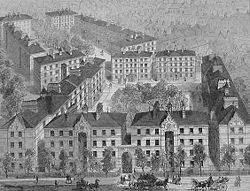 Peabody Square Model Dwellings, in Blackfriars Road, Southwark, inner South London. These buildings, which still exist, are a typical example of an early Peabody Trust development, and of pre-World War I social housing in London in general.

In the mid-nineteenth century Britain was at the peak of industrialization, with thousands of poor and homeless increasing in numbers at an alarming rate. The situation was especially serious in the big cities. Having had the experience of being poor himself, Peabody turned to philanthropy in an effort to relieve those with the greatest needs. In a letter to his nephew, David Peabody, he said:

Deprived, as I was, of the opportunity of obtaining anything more than the most common education, I am well qualified to estimate its value by the disadvantages I labour under in the society in which my business and situation in life frequently throws me, and willingly would I now give twenty times the expense attending a good education could I possess it, but it is now too late for me to learn and I can only do to those that come under my care, as I could have wished circumstances had permitted others to have done by me (Peabody Historical Society).

Unlike other philanthropists of the time, who used their philanthropic work to promote religious beliefs, Peabody clearly stated that his institutions were not to be used to propagate any particular theology or political stance. 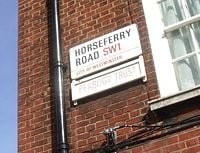 Peabody Estates provide cheap housing in Central London even today. This sign is on the side of an estate in Westminster.

In London, Peabody established the Peabody Donation Fund, which continues to this day, as the Peabody Trust, to provide subsidized housing in London. The first dwellings opened by the Peabody Trust—for the artisans and laboring poor of London—were opened in Commercial Street, Whitechapel, in February 1864.

In America, Peabody founded and supported numerous institutions in New England and elsewhere. At the close of the American Civil War, he established the Peabody Education Fund to “encourage the intellectual, moral, and industrial education of the destitute children of the Southern States." He founded, in 1857, the Peabody Institute, which was the first academy of music established in the United States.

George Peabody is known to have provided benefactions of more than $8 million, most of them during his own lifetime. Among these are included: 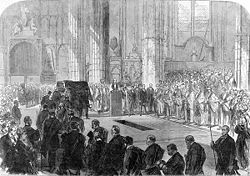 Peabody was made a Freeman of the city of London, the motion being proposed by Charles Reed in recognition of his financial contribution to London's poor. In 1867, Oxford granted him the honorary degree of D.C.L. He refused to accept either a baronetcy or the Grand Cross of the Bath from Queen Victoria.

Peabody never married. He died in London on November 4, 1869, at age 74. At the request of the Dean of Westminster, and with the approval of the Queen, Peabody was given a temporary burial in Westminster Abbey.

His will provided that he be buried in the town of his birth, Danvers, Massachusetts, and Prime Minister William Ewart Gladstone arranged for Peabody's remains to be returned to America on HMS Monarch, the newest and largest ship in Her Majesty's Navy. He is buried in his home town, renamed Peabody in his honor, at Harmony Grove Cemetery. 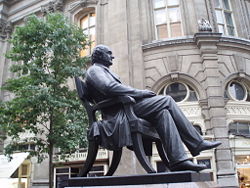 Statue of George Peabody in London

Peabody is the acknowledged father of modern philanthropy, having established the practice that was later followed by Andrew Carnegie, John D. Rockefeller, and Bill Gates.

The town of South Danvers, Massachusetts changed its name to The City of Peabody in honor of its favorite son. His birthplace at 205 Washington Street is now the George Peabody House Museum.

A statue of Peabody stands next to the Royal Exchange in the City of London, unveiled in 1869, shortly before his death. There is a similar statue next to the Peabody Institute, in Mount Vernon Park, in Baltimore, Maryland.

Peabody is a member of the Hall of Fame for Great Americans located at the Bronx Community College, at the former site of New York University (NYU).