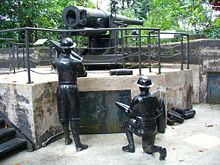 Fort Pasir Panjang, or Labrador Battery, located at the southern tip of Singapore island, served as a key British coastal fort during the nineteenth and twentieth centuries. The Fort defended the western passageway into Keppel Harbor against pirates and rival naval powers. During the 1942 Battle of Pasir Panjang, the British used the fort to support the Malay Regiments against the Japanese at Bukit Chandu. In 1995, the Singapore National Heritage Board recognized the site as one of the eleven notable World War II sites in Singapore.[1]

Great Britain, which had carved out colonies throughout the world, understood the importance of coaling stations and coastal forts in strategic places. Singapore fit that need in excellent fashion. Britain widened the straights in 1848 in preparation for building defenses. In 1878, Britain built two forts to protect the main entrance into Singapore harbor, one of them Fort Pasir Panjang. In that year, Japan experienced the Meiji Restoration, a political earthquake that set Japan on the path of becoming a power equal to the European and American powers. Inevitably, Japan and Great Britain, along with the U.S. and Russia, would clash for control of Asia. The fall of Fort Pasir Panjang to Japan, and subsequently the fall of Singapore, set a shock wave throughout the Allied Forces. Great Britain suffered possibly its single greatest defeat in its military history. The war in the Pacific continued from another three and a half years. When the guns silenced, Japan had lost its empire, including Singapore. Great Britain, although on the side of the victors, relinquished control of many of it's colonies soon after World World II ended. Singapore secured its own independence in 1963.

Fort Pasir Panjang originally was called Labrador Battery, named after Labrador Bay. Two craggy granite outcrops, Long Ya Men (龙牙门), or Dragon's Teeth Gate, formerly stood on each side of the entrance to the Keppel Harbor, at that time called New Harbor. Dragon's Teeth Gate served as a navigation landmark to mariners since ancient times.[2] The Straits Settlement Surveyor, John Thomson, subsequently blew up the two rock outcrops in August 1848, to widen the entrance to the harbor.[3] The British recognized Labrador's strategic value as early as 1843 when making plans to set up defenses to protect Singapore, an important trading post founded by Sir Stamford Raffles of the British East India Company in 1819.

The New Harbor had been renamed as Keppel Harbor in 1900 after Admiral Sir Henry Keppel of HMS Meander, who carried out an on-site survey to build an anchorage in the harbor in the 1880s. In 1842, he had won renown for his successful campaigns against pirates harassing merchant ships close to the harbor entrance. His work rendered piracy less dangerous in the waters off Singapore from the 1850s.[4]

A white obelisk stands near the former site of Long Ya Men marking the original Western Harbour boundary. That obelisk still stands at Tanjong Berlayer Point ("Tanjong" means "land's end" in Malay) marking the southernmost tip of the Asian Continent.[5]

In 1878, British engineers placed forts on either side of the entrance to New Harbour in an attempt to strengthen coastal defenses in Singapore for protection against naval attack by European powers. They constructed Fort Pasir Panjang on Labrador and Fort Siloso on Pulau Blakang Mati (now Sentosa). The steep cliffs and thick mangrove swamps surrounding the two forts acted as excellent natural barriers against attackers. 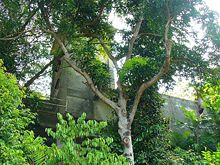 The Fort's watch tower located at the edge of the entrance of Singapore's Keppel Harbor. The tower provided a commanding view of approaching ships entering into the harbor

In 1881, British engineers laid mines in the waters between the two forts and at the eastern entrance of the harbor to further strengthen the defenses. They tethered the mines to the seabed, adjusted to float just under the surface of the water. The British created a "friendly safe channel" through the minefields. The mine field work led to speculation that a tunnel had been created under the channel, linking the two forts.[6]

The Casemate, built in 1886, served as an ammunition store for the guns and a shelter for gunners and infantry groups stationed at the Fort. Situated at the highest point of the hill, it served the 9.2-inch R.M.L. guns. One of the four rooms opened into a tunnel that led to underground store rooms beneath the first emplacement.[10] Singaporean Lim Bo Seng, a war hero, had been a major brick supplier for the colonial government in the late 1930s. Bricks Lim supplied had been used to build sections of the Casemate. His other projects included the construction of Alexandra Hospital and the army barracks in Changi.[11] 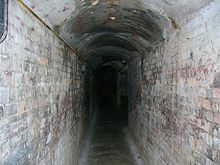 The tunnels constructed in 1886 access underground storerooms for the artillery pieces. The tunnels accessing the storage room for Gun Emplacement III is the most extensive tunnel discovered at Labrador Park.[12] Immediately upon entering the tunnel the soldier entered a enlarged chamber allowing for two-way foot traffic. The tunnel splits into two, one branch leading into the cartridge storeroom and hoist area while the other leads to the shell storeroom and hoist area. A mechanical pulley system hoists the shells and cartridges from the underground storeroom to the emplacement above it. Each artillery emplacement had a hoist dedicated to supply ammunition.

Uses of the underground rooms

The underground tunnels lead to the following areas:

Before the onset of World War II, the British upgraded Fort Pasir Panjang to Labrador Battery, placing tank obstacles, land mines and beach defenses around the Fort. They hastily established air bases and garrisons in Malaya to counter the Japanese invasion threat. In anticipation of a coastal attack, eleven forts and gun batteries protected the coast south of Singapore:

By the eve of the Japanese invasion, Singapore had become a highly fortified country, seemingly prepared to repel any attacking foe.[13]

By February 13, 1942, the Japanese had already reached Pasir Panjang Ridge (present Kent Ridge Park) after destroying the Allied artillery emplacement on Chwee Chian Hill where Poh Ern Shih Temple stands today. The main ammunition stores and Alexandra Hospital lay close by. The men of the 1st Battalion, Charlie Company, Malay Regiment, led by Lieutenent Adnan Bin Saidi fought bravely to the last. They killed or wounded many Japanese soldiers. The guns from Labrador assisted the Malay Regiment in their 48-hour struggle against the Japanese by firing high explosive shells at the enemy forces.[7] Reinforced, the Japanese surrounded and massacred Malay Regiment. Three soldiers, together with Lieutenant Abbas Abdul-Manan, managed to escape and rejoin thirty soldiers from a British battalion nearby. 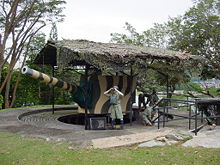 After the battle for Pasir Panjang Ridge, the Japanese marched toward Singapore to engage the remaining Allied forces. Perched on a hill near present Keppel Country Club along Pasir Panjang Road, Malay and British soldiers prepared to ambush the Japanese convoy heading towards the city. Using mounted Bofors guns, they let loose a volley forcing the Japanese to take cover. Japanese tanks moved forward to engage the enemy, blocked by the dead and wounded covering the way. About 100 Japanese soldiers died during the ambush before the Anglo-Malay force retreated to the city to join forces for their final stand against the Japanese.[14]

On February 14, 1942, seeking reprisal for losses suffered, and in retaliation for fire taken from Alexandra Hospital by the 44th Indian Brigade, Japanese soldiers went on a rampage throughout the hospital. Entering from the rear, they bayoneted everyone they found; soldiers, patients, and medical staff.[15] They killed a British officer, Lieutenant W.E.J. Weston, who carried a white flag to meet them. A wounded soldier, Corporal Holden, died at the point of a bayonet while lying on an operating table. The Japanese massacred approximately 200 men, women, and children.[16] Some managed to escape death by acting dead.

The following day, Lieutenant-General Renya Mutaguchi, Commander of the Japanese 18th Division toured the hospital and distributed tinned fruits, all the while apologizing profusely for the brutality of his soldiers and assured the staff of their safety. He also ordered the execution of the Japanese soldiers within the hospital grounds who had been responsible for the massacre.[17]

The British, expecting an attack from the sea, set their defenses to handle that threat. When the Japanese attacked by land, they found themselves at a tremendous disadvantage. British command had aimed the guns defending Singapore seawards, constructing concrete barriers behind them. Gunners encountered difficulty turning their guns to fire northward on the advancing Japanese troops. Officers had distributed anti-ship armor-piercing cartridges rather than high explosive (H.E.) rounds, which prove more effective against infantry. As a result, the artillery proved ineffectual during the Battle of Singapore.

Before the British surrendered to the Japanese on February 15, 1942, they destroyed all coastal artillery in an operation named Scorched Earth. They burned and destroyed everything that the invading Japanese might find useful.[18] After World War II, the British disbanded forts worldwide as advances in air defense systems rendered them obsolete. Today, the abandoned emplacements at Labrador Battery, Mount Faber, Fort Siloso and Fort Canning remain, serving as a sad reminder of the Battle of Singapore.