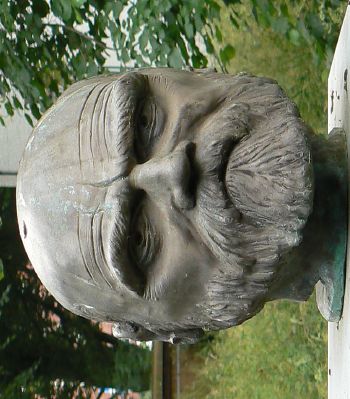 Ferdinand Tönnies or Ferdinand Toennies (July 26, 1855 – April 9, 1936) was a German sociologist. He was a major contributor to sociological theory and field studies, and a co-founder of the German Society of Sociology. He is best known for his distinction between two types of social groups: Gemeinschaft and Gesellschaft, based on the conception of "essential" or instinctive will, which focuses on the whole purpose, and "arbitrary" or rational will, which is based on self-interest.

Tönnies' concept of Gemeinschaft sees social structures such as the family, tribe, or village as the purest ones in the sense of human relationships, where humans base their actions not on personal interest, but on the benefit of the whole group. Industrial societies, on the other hand, are characterized by Gesellschaft, governed by rationality while lacking in human relatedness. According to Tönnies, the more complex the social structure is, the less personal relationships become. Probably due to his own experiences with industrialization, Tönnies was pessimistic about the possibility that even cities and states can be based on anything other than rational self-interest. Despite this pessimism, Tönnies he believed that all social structures contain elements of both types of will.

The social peace and harmony depends upon the proper balance between human relatedness and rational self-interest. Individuals and movements throughout the nineteenth and twentieth centuries have sought in various ways to reclaim Gemeinschaft amidst the cold rationality of industrial society. In many democracies, a vital locus for Gemeinschaft lies in "mediating institutions" such as churches, social clubs and service organizations. These small voluntary associations provide a necessary bridge between the instinctive relations of the family and the rational behavior expected in large-scale political and economic institutions.

The time in which he was living greatly influenced the development of Tönnies' worldview. He was a witness to drastic changes in social structure, as the Industrial Revolution was quickly transforming society. Tönnies, on one side saw the progress that industrialization was bringing, but on the other he remained pessimistic because he saw the decline in traditional morality as person-to-person alienation mounted. His works reflect this pessimistic view of modern society.

Tönnies received his doctorate for classical philology in Tübingen in 1877, with a Latin thesis on the ancient Siwa Oasis. Four years later he became a private lecturer at the University of Kiel, teaching philosophy, economics, statistics, and sociology. Because he had sympathized with the Hamburg dockers' strike of 1896, the Prussian government considered him to be a social-democrat, and Tönnies was not called to a professorship until 1913. He held his post at the University of Kiel for only three years.

From 1909 to 1933 he was president of the German Sociological Society, which he co-founded together with Georg Simmel, Werner Sombart, and Max Weber. He returned to the University of Kiel as a professor emeritus in 1921, and taught there until 1933 when he was ousted by the Nazis, due to his earlier publications criticizing them. He died in Kiel three years later, in 1936. 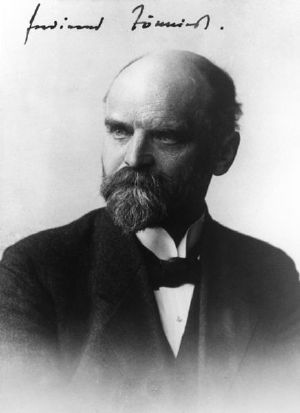 This distinction between social groupings is based on the assumption that there are only two basic forms of will: "essential will" and "arbitrary will." The "essential will" (Wesenwille) or "natural will," leads the actor to see himself as a means to serve the goals of a social grouping. Very often this will is an underlying, subconscious, almost instinctive force, that motivates people to volunteer their time and to serve others. Groupings formed around an essential will are called Gemeinschaft, and they can be understood as an organic type of structure.

The other type of will is the "arbitrary will" (Kürwille) or "rational will," which Tönnies based on the ideas of Thomas Hobbes, some of whose works he edited. An actor here sees the social group as a means to further his individual goals, and so it is purposive and future-oriented, based on conscious decision-making. Groupings around the latter are called Gesellschaft and their structure can be understood as based on social contracts. While the membership in a Gemeinschaft is self-fulfilling, a Gesellschaft is instrumental for its members. In pure sociology, i.e. theoretically, these two types of will are to be strictly separated; in applied sociology, i.e. empirically, they are always mixed.

Tönnies was ultimately interested in social change. Through the concept of Gemeinschaft and Gesellschaft he explained the evolution of society from ancient to modern. He saw ancient society as predominantly rooted in the essential will, where families, tribes, and villages functioned around common heritage. People predominantly used essential will, for the benefit of the whole group. In more developed societies, however, the relationships between people are based on arbitrary will, with the social structures formed around common interests. People in such societies predominantly use arbitrary will based on their own interest, choosing between different means to fulfill certain individual needs. Tönnies, however, did not see modern society as exclusively based in arbitrary will, but as a mix of the two. In his conception, every social organization is a synthesis of the two wills.

Tönnies published over 900 works, and contributed to many areas of sociology and philosophy. Many of his writings on sociological theories, including his masterpiece Gemeinschaft und Gesellschaft furthered pure sociology. He coined the term "voluntarism."

Tönnies also contributed to the study of social change, particularly on public opinion, customs and technology, crime, and suicide. He also had a vivid interest in methodology, especially statistics, and sociological research, inventing his own technique of statistical association.

The Ferdinand Tönnies Society (Ferdinand-Tönnies-Gesellschaft) was founded 1956 in Kiel, with the vision of furthering sociological research in honor of Ferdinand Tönnies, as one of the founders of German sociology.

Retrieved from https://www.newworldencyclopedia.org/p/index.php?title=Ferdinand_Tönnies&oldid=1074996
Categories:
Hidden category:
This page was last edited on 1 August 2022, at 23:13.
Content is available under Creative Commons Attribution/Share-Alike License; additional terms may apply. See Terms of Use for details.