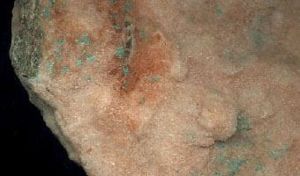 A sample of evaporite material.

In geology, evaporites are water-soluble, mineral sediments that result from the evaporation of restricted bodies of water on the Earth's surface. They are considered sedimentary rocks. Major evaporite minerals include halides (such as halite, sodium chloride), sulfates, nitrates, carbonates, and borates. These deposits are highly valued. For example, halites can form diapirs[1] (salt domes) where petroleum deposits can be trapped, and nitrates are important for the manufacture of fertilizers and explosives.

All bodies of water on the Earth's surface and in aquifers contain dissolved salts. To form minerals from these salts, the water must evaporate into the atmosphere, so that the minerals precipitate out. For this to happen, a water body must enter a restricted environment in which water input remains below the net rate of evaporation. This is usually an arid environment with a small basin fed by a limited input of water. When evaporation occurs, the remaining water is enriched in salts, which precipitate when their concentration in water becomes high enough that they can no longer remain in solution.

The less soluble a mineral is, the more readily it precipitates out of solution. The order of precipitation for several minerals is:

Most evaporite formations do not contain more than a few percent of evaporite minerals, the remainder being composed of the more typical detrital clastic rocks and carbonates.

For a formation to be recognized as evaporitic, it may simply require recognition of halite-like structures (pseudomorphs), sequences composed of some proportion of evaporite minerals, and recognition of mud crack textures or other textures.

Evaporites can also be recrystallized in laboratories. Scientists use this approach to determine the specific characteristics of formation of these minerals.

Environments where evaporite deposits are found

Evaporite deposits can be found in the following environments:

Evaporites are important economically because of their mineralogy, their physical properties in-situ, and their behavior within the subsurface.

Thick halite deposits are expected to become an important location for the disposal of nuclear waste because of their geologic stability, predictable engineering and physical behavior, and imperviousness to groundwater.

Halite formations are famous for their ability to form diapirs, which produce ideal locations for trapping petroleum deposits.

Retrieved from https://www.newworldencyclopedia.org/p/index.php?title=Evaporite&oldid=1069884
Categories:
Hidden category:
This page was last edited on 31 May 2022, at 16:46.
Content is available under Creative Commons Attribution/Share-Alike License; additional terms may apply. See Terms of Use for details.