Dorothea Lange (May 25, 1895 – October 11, 1965) was an influential American documentary photographer and photojournalist, best known for her Dust Bowl photographs, taken throughout the American south and the west, chronicling the hard scrabble lives of migrant workers. Lange's photographs gave a human face to a dark chapter in American history—the Great Depression. Her pictures of mothers and fathers, of the homeless, of those in soup lines, of children in ragged clothing, not only profoundly influenced the development of documentary photography but also of social policies under President Franklin D. Roosevelt's New Deal administration. She photographed everyday Americans; their strength and their resolve, and the bonds of family and community that helped them to survive difficult times.

In 1941, Lange became the first woman to be awarded a Guggenheim Fellowship in photography.

With her second husband, Paul Taylor, an expert in farming and migratory labor, she traveled the world contributing, through her work, to the new era of global communications that was burgeoning after World War II and to the developing concept of an international family of humanity.

Born in Hoboken, New Jersey, her birth name was Dorothea Margarette Nutzhorn. After her father's abandonment of the family, she and her siblings dropped the patronym Nutzhorn and adopted their mother's maiden name of Lange. Another childhood trauma for Lange was her contraction of polio in 1902, at age seven. Like other polio victims before treatment was available, Lange emerged with a weakened right leg and dropped foot. Although she compensated well for her disability, she always walked with a limp.

Lange once commented on her disability saying, "I was physically disabled, and no one who hasn't lived the life of a semi-cripple knows how much that means. I think it perhaps was the most important thing that happened to me, and formed me, guided me, instructed me, helped me, and humiliated me. All those things at once."[1]

Lange learned photography in New York City in a class taught by Clarence H. White of the Photo-Secession group at Columbia University. She informally apprenticed herself to several New York photography studios, including that of the famed society photographer, Arnold Genthe. In 1918, she moved to San Francisco, where she opened a successful portrait studio. She lived across the bay in Berkeley for the rest of her life. In 1920, she married the noted western painter Maynard Dixon, with whom she had two sons: Daniel, born 1925, and John, born 1928.[2]

Photography and the Great Depression

After the Stock Market Crash of 1929, and the ensuing Depression, Lange, finding herself bored with photographing the societal elite, turned her camera lens to the street. Her first notable picture, taken in 1934, titled White Angel Breadline, shows a group of men in a food line near her studio. Her studies of the unemployed and the homeless captured the attention of not only the public but of government officials and led to her employment with the Federal Resettlement Administration (RA), later called the Farm Security Administration (FSA). Another person whose interest she captured was Willard Van Dyke, a founding member of the the avant-garde Group f/64, who exhibited her works in his gallery.

In December 1935, she divorced Dixon and married agricultural economist Paul Schuster Taylor, Professor of Economics at the University of California, Berkeley. Together, over the next five years, they documented rural poverty including sharecroppers and migrant laborers—Taylor interviewing and gathering economic data, Lange taking photos. Some of her best photographs from this period were compiled in a book by Lange called, American Exodus: A Record of Human Erosion.

From 1935 to 1939, Lange's work for the RA and FSA brought the plight of the poor and forgotten—particularly, displaced farm families and migrant workers—to public attention. Distributed free to newspapers across the country, her poignant images became icons of the era. 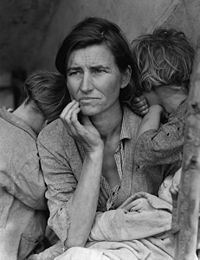 Lange's best known picture, titled Migrant Mother (1936), shows a weary and worried woman, a pea picker, and her hungry children. The picture resulted in aid to the pea pickers and was used internationally to raise funds for medical supplies. Many years later the identity of the woman, Florence Owens Thompson was discovered, but Lange apparently never knew her name.

In 1960, Lange spoke about her experience taking the photograph:

I saw and approached the hungry and desperate mother, as if drawn by a magnet. I do not remember how I explained my presence or my camera to her, but I do remember she asked me no questions. I made five exposures, working closer and closer from the same direction. I did not ask her name or her history. She told me her age, that she was thirty-two. She said that they had been living on frozen vegetables from the surrounding fields, and birds that the children killed. She had just sold the tires from her car to buy food. There she sat in that lean-to tent with her children huddled around her, and seemed to know that my pictures might help her, and so she helped me. There was a sort of equality about it.

According to Thompson's son, Lange got some details of this story wrong,[3] but the impact of the picture was based on the image showing the inner strength, yet desperate need, of migrant workers. 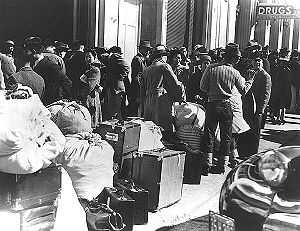 Lange's photo of the Japanese Relocation

In 1941, Lange was awarded a Guggenheim Fellowship for excellence in photography. After the attack on Pearl Harbor, she gave up the prestigious award to record the forced evacuation of Japanese-Americans (Nisei) to relocation camps in the American West, on assignment for the War Relocation Authority (WRA). She covered the rounding up of Japanese-Americans, their evacuation into temporary assembly centers, and then to Manzanar, the first of the permanent internment camps. To many observers, her photographs of young Japanese-American girls pledging allegiance to the flag shortly before they were sent to internment camps is a haunting reminder of this policy of detaining people without charging them with any crime, simply based on their country of origin in a time of war.

Her images were so politically sensitive when they were taken that the United States Army impounded them and they remained suppressed for many years. In 2006, nearly 800 of Lange's photos were resurrected from the National Archives and are available on the website of the Still Photographs Division, and at the Bancroft Library of the University of California, Berkeley.

Lange’s Depression-era photographs were included in the Century of Progress International Photography Salon in 1933, in San Francisco. A year later, Lange had her first exhibition in Oakland, California. In 1934, a collection of Lange’s photographs was published in Survey Graphic magazine. American Exodus, a book jointly produced with Paul Taylor, was published in 1939. In 1952, Lange founded Aperture magazine with Ansel Adams, Minor White, Barbara Morgan, and Beaumont and Nancy Newhall.[4]

Her photographs appeared in three exhibitions at the Museum of Modern Art (MOMA) in New York City. These exhibits, organized by Edward Steichen, were Sixty Prints by Six Women Photographers (1949), The Family of Man (1955), and The Bitter Years (1962). Her final exhibition, a one-person show at MOMA gave Dorothea Lange her greatest satisfaction. Prior to 1964, the museum had presented only five major one-man exhibits: Walker Evans, Paul Strand, Edward Weston, Henri Cartier-Bresson, and Edward Steichen. In early 1966, the museum’s sixth “one-man” exhibit, featured Lange.[5]

End of life and legacy

On her technique, Lange once commented,

She was known for striking up conversations with her subjects, letting children play with her camera equipment, and asking permission to take photographs. She preferred to photograph people outdoors in natural light, and from a low angle. Although Lange's photos often show care worn or resigned subjects, she preserved their dignity and treated them with compassion, a quality born, undoubtedly of her own difficult childhood experiences.[7]

In the last two decades of her life, Lange's health was declining. She suffered from gastric problems, including bleeding ulcers, as well as post-polio syndrome—although this renewal of the pain and weakness of polio was not yet recognized by most physicians. She died of esophageal cancer on October 11, 1965, aged 70, shortly before a major retrospective of her work was to open in January 1966, at the Museum of Modern Art in New York City.

Lange's White Angel Bread Line sold for $822,400 in October 2005, at Sotheby's in New York, tying the record for the sale of a twentieth century photograph. The price tied the previous top photograph, Edward Weston's The Breast.[8]

Retrieved from https://www.newworldencyclopedia.org/p/index.php?title=Dorothea_Lange&oldid=1040263
Categories:
Hidden category:
This page was last edited on 1 August 2020, at 19:22.
Content is available under Creative Commons Attribution/Share-Alike License; additional terms may apply. See Terms of Use for details.